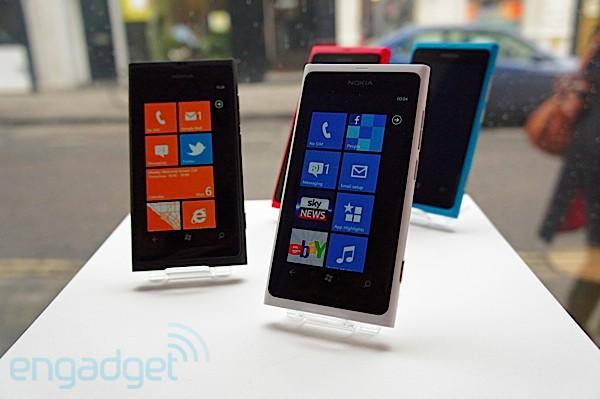 So if you live out in China, and were counting down the days until you could get your hands on a legit Lumia 800 (or the 610), you're almost there. Nokia's slab of Windows Phone, renamed the 800C was unveiled by China Telecom today as we'd heard, and will launch in stores fully next month. There'll be 20,000 apps available in the Marketplace when it does finally ship, which should be enough to keep you going. Color-wise there'll be cyan and black options, setting you back 3599 RMB sans contract. Head down to the official PR for the company pomp.
Show full PR text
China Telecom and Nokia launch first CDMA Windows Phone in China

Beijing, China - Today China Telecom and Nokia announced the Nokia 800C, the first CDMA Windows Phone in China and Nokia's first Lumia phone for the world's largest smartphone market. The Nokia 800C combines head-turning design and the fastest way to connect to the people, places and things that matter most, in an experience uniquely tailored for people in China on the country's leading 3G network.

Wang Xiaochu, Chairman of China Telecom, expressed his enthusiasm for Nokia Lumia: "This grand launch for China's first CDMA Windows Phone represents our optimism and excitement for the future of Windows Phone and Nokia Lumia in China."

The partnership between China Telecom and Nokia extends beyond the Nokia 800C with the addition of Nokia's most affordable Lumia smartphone, the Nokia Lumia 610 also arriving in a CDMA variant to China Telecom's portfolio in Q2 2012. The Nokia 610C is targeted at a more youthful audience and provides a perfect introduction to Windows Phone with access to the same core signature experiences as the rest of the Lumia range in a package optimized for quality.

The Nokia 800C makes it easy to stay in touch with the people that matter most, get instant access to the Web and all the top applications in the Windows Phone Marketplace. Offered by China Telecom in black and cyan, the Nokia 800C features a reduced body design flowing seamlessly into the 3.7" AMOLED ClearBlack curved touchscreen display. With a 1.4 GHz processor, hardware acceleration and a separate graphics processor, it also features an instant-share 8 Mpx camera with exclusive Carl Zeiss optics, HD video playback, 16GB of internal user memory and SkyDrive storage for accessing pictures and files from anywhere.

The Nokia 800C brings signature Nokia experiences optimized for Windows Phone and available only on Lumia:

- Nokia Maps, providing quick-access, superior, three-dimensional maps in China and over 190 countries worldwide, as well as the ability to discover the top places nearby with local content support from Fantong, Jiepang, Ctrip, Qunar and Soufun. People can easily click on the places to see photos, recommendations and information and quickly dial restaurants to make a reservation.
- Nokia Drive, which delivers a full-fledged personal navigation device with free, voice-guided, turn-by-turn navigation for over 100 countries including China, a dedicated in-car user-interface, free offline navigation and speed notifications.

- Nokia Music which offers a single hub experience for discovering the latest music, including unlimited free music for 12 months for consumers in mainland China. It also includes MixRadio, a free, global, mobile music-streaming application that delivers hundreds of channels of locally-relevant music, including the ability to listen to music offline and build personalized mixes for listening to favourite music from any location.

Exclusive applications and services for a uniquely local experience
China Telecom and Nokia have worked closely together to bring integrated China Telecom services that target young people including music, games, videos, and integrated reading apps right onto the Nokia 800C home screen. To reach this target market, the Nokia 800C will be featured prominently in Tianyi FlyYoung shops, a distribution arm and new, youth-centered sub-brand of China Telecom.

People purchasing Nokia Lumia smartphones in China will have access to exclusive applications such as magazines from Trends and special offers for free downloads of popular gaming titles such as Fruit Ninja and PVZ.

- As an added incentive for people using a Nokia Lumia smartphone in China, Nokia will soon offer 100,000 free downloads of the hit gaming titles Fruit Ninja and PVZ through the Nokia Collection in Marketplace.

Nokia and Microsoft also announced the Be Top program, which is designed to encourage and support developers in creating great new applications on Windows Phone specifically for people in China.

These exciting offers and the BeTop development program illustrate Nokia's commitment to the local ecosystem of application developers and service providers. Through joint innovation with leading local providers, Nokia is able to offer Lumia users access to all major Internet services in China including Sina, SOHU, Tencent and Renren. When paired with the choice of nearly 20,000 apps available for download through Marketplace, people using a Nokia Lumia smartphone in China can create a truly personalized and locally relevant experience on their device.

Availability and Pricing
The Nokia 800C will be available for purchase in April through Tianyi FlyYoung shops, a distribution channel of China Telecom; Nokia brand stores; China's top chain electronics stores including Suning, Gome, Funtalk, D.Phone, and CentreYou, as well as regional channels and online shops such as 189.cn and hicdma.com. The Nokia 800C is offered without contract for 3599 RMB.
In this article: 800c, china, china telecom, china unicom, ChinaTelecom, ChinaUnicom, lumia 610, lumia 710, lumia 800, lumia 800c, Lumia610, Lumia710, Lumia800, Lumia800c, microsoft, mobilepostcross, nokia, nokia lumia 610, nokia lumia 710, nokia lumia 800, NokiaLumia610, NokiaLumia710, NokiaLumia800
All products recommended by Engadget are selected by our editorial team, independent of our parent company. Some of our stories include affiliate links. If you buy something through one of these links, we may earn an affiliate commission.
Share
Tweet
Share