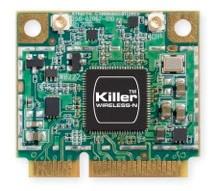 Killer Technology -- formerly known as Bigfoot Networks -- has certainly come a long way from its days as a scrappy startup, and now the outfit's taking one more step towards ping domination with the introduction of two new products. Qualcomm Atheros is actually doing the honors, as it formally reveals the Killer Wireless-N 1202 WiFi module with Bluetooth as well as the Killer E2200 gigabit Ethernet controller. Each one is aimed at DIYers and OEMs, enabling machines based on them to automatically classify and prioritizing gaming, video and audio network data -- a bit of behind-the-scenes black magic that's said to "provide a superior, uninterrupted online entertainment experience." As you'd expect, both will include the Killer Network Manager software on associated rigs, giving end users a borderline ridiculous amount of control over how bandwidth is used. We're told that the 1202 will ship next month, while the E2200 is available now; pricing remains a mystery on both, though.

In this article: Atheros, bigfoot networks, BigfootNetworks, e2200, gaming, killer, killer e2200, Killer Technology, Killer Wireless-N 1202, KillerE2200, KillerTechnology, KillerWireless-n1202, latency, networking, ping, Qualcomm, Qualcomm Atheros, QualcommAtheros
All products recommended by Engadget are selected by our editorial team, independent of our parent company. Some of our stories include affiliate links. If you buy something through one of these links, we may earn an affiliate commission.
Share
Tweet
Share