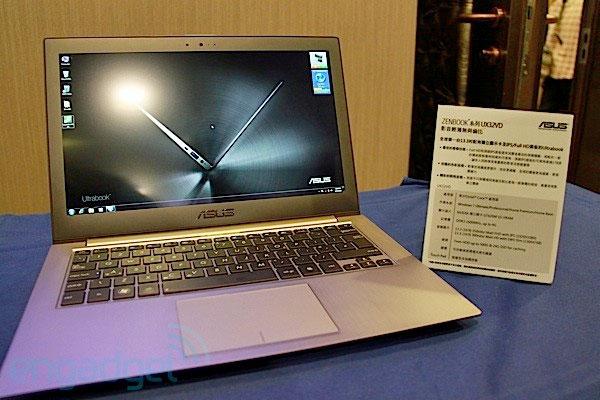 New high-resolution Zenbooks are on their way, but ASUS has now revealed another addition that's packing its own discrete graphics. Like its recently unveiled siblings, the Zenbook UX32VD still packs a 1920 x 1080 IPS panel and "the latest Intel Core processor" -- likely something from the Ivy Bridge family, although ASUS is keeping schtum on the details for now. Graphical horsepower is delegated to NVIDIA's GT620, while the UX32VD also had a hybrid HDD on show at the event, not the standard SSD -- explaining why this new model is slightly thicker than the UX31A. Alongside a lack of processor specifics, there was no info on prices or release dates at the Taiwan press event but for now, Engadget Chinese have posted their full impressions at the source below. Ultrabook and graphics mavens can hit up the Google translation for a few more details. 10
In this article: ASUS, ASUS Zenbook UX32VD, AsusZenbookUx32vd, discrete graphics, DiscreteGraphics, graphics card, GraphicsCard, Taiwan, UX32VD, Zenbook, Zenbook UX32VD, ZenbookUx32vd
All products recommended by Engadget are selected by our editorial team, independent of our parent company. Some of our stories include affiliate links. If you buy something through one of these links, we may earn an affiliate commission.
Share
Tweet
Share