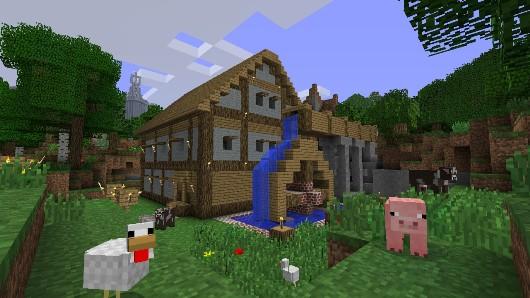 Minecraft on Xbox Live Arcade is surreal. It's like eating jelly on eggs while watching a baby play in a lion cage: It doesn't belong where it is, but now that it's there you can't look away and, for some reason, there's a surprisingly delicious taste in your mouth.

Minecraft's shock value as an XBLA breakout isn't a result of it not making sense on the platform – in fact, it plays almost like a native title. It's surprising because Minecraft was never supposed to be big enough for a high-profile XBLA port. It's a voxel-based PC-only sandbox game with choppy graphics and no defined goal, which some argue makes it the opposite of a "game." Minecraft was never supposed to be a hit. It wasn't supposed to sell more than 5 million copies, generate $80 million or be played by more than 25 million people. It wasn't supposed to turn Markus Persson's developer persona, Notch, into a millionaire, a fashion icon, or a common name among Swedes and gamers alike,

But Minecraft has done all of these things, and now it's made its way XBLA. And just as it has everywhere else, Minecraft surprisingly succeeds.

What's new this time around? In the PC version of Minecraft, the world is limited only by the size of your computer's memory, meaning if you strap enough RAM into one PC, you could live forever in your own boxy world and never visit the same place twice. This dream dies on XBLA, as the worlds are exponentially smaller, taking a matter of five minutes to hit an invisible wall from the central point on the map. Xbox 360 boasts just over 500MB of memory, and the game was clearly built within that limitation, with little hope of overcoming it.

Minecraft's PC version offers a carefree, robust sandbox with creative mode, which allows players to build fortresses, castles and spaceships without the threat of death or the need to actually go out and mine for all the necessary material. Also, it allows players to fly, which is pretty much the coolest thing. Minecraft on XBLA doesn't support a creative mode, meaning it doesn't let anyone fly, which is tantamount to strapping Kryptonite to Superman's forehead and running away giggling. Rude.

Crafting presents the most obvious console alteration, as the XBLA version expunges all the mystery from combining random objects by replacing it with a choose-your-item list system. The list shows all the items you can craft, what materials they require and the amount of said materials you currently possess. If the original Minecraft crafting system is intuitive guesswork, the XBLA version is Sherlock Holmes on Adderall.

Minecraft on XBLA offers up to four-player split-screen multiplayer, which is new to the title and does exactly what it promises. Split-screen requires you have an HDTV, a necessity omitted from the game description and marketing. However, if you have an HD set-up and friends, split-screen play is like adding visuals to a radio show: Instead of just hearing a friend scream in terror as a spider jumps into his house, you can see how much his camera twitches around the screen while he locates his sword. XBLA Minecraft also supports online multiplayer, which is available in the PC version.

Other aspects are altered from the simple inclusion of a controller, such as the inventory and swimming modes, which don't perform as smoothly as with a keyboard and mouse. The inventory is presented in the same format as in the PC version – and that's the problem in itself. Clicking on items and boxes is easier with a mouse than with a statically scrolling reticle, and organizing items can be a tedious process with a controller. Swimming in the XBLA edition requires players to keep the A button pressed, limiting the freedom of the right thumb and making it difficult to look around with the right stick. As someone who likes to know where she's going, especially in large bodies of water, this is an annoying design choice.

Lastly, rather than using shears, you have to hit sheep with your fists, weapons or household items to farm their wool. This is strange, but immensely satisfying.

How's it hold up? Personally, I don't need an infinite on-screen world to find Minecraft enjoyable. I spend most of my time building up and maintaining my personal little bubble, which generally consists of a glass house built into the side of a mountain, a waterway, garden, rail line and entrance to a massive cavern system, which I call "the basement." When I'm feeling frisky, I'll build a castle and call it "Bogwarts." The size of XBLA Minecraft's worlds is an unavoidable constraint, but it doesn't alter the basic premise of the game itself: A sandbox. Or an architect sim, if that makes you feel like more of an adult.

Despite the fact that most precision games are more easily controlled with a keyboard and mouse, I gravitate to a gamepad in most situations, and Minecraft proved to be a natural fit for the Xbox control scheme. If I didn't already know that inventory and swimming were more ergonomic with a keyboard, I wouldn't notice such a disparity on Xbox. I would contort my fingers trying to look around and stay above water at the same time, telling myself that Mojang designed it that way on purpose to simulate getting a swimming cramp, and I would like it. At least, I wouldn't yearn for a mouse as much.

However, the PC version does exist, and a few things are readily apparent. Minecraft on XBLA isn't a "lite" version of the game, although it is smaller in scope. It includes plenty of items to find, terrain to explore and things to build that will keep both new and veteran players engaged just as the PC version did when it was still a baby beta. For those itching for creative mode, the "peaceful" mode regenerates health and has no monsters appear at night; it doesn't provide any freebie supplies or flight powers, though.

Minecraft on XBLA blends the best bits of its originator – the open world, vast resources and customizable terrain – with just a dash of the worst – the inescapable, lethal monsters – to force players to experience Minecraft as a game first and a playground second. The exclusion of creative mode forces players to truly engage with the world, to farm materials and guard against enemies, and to build things by the sweat of their brow palms. This isn't the hardcore builder's dream version of Minecraft, but it is successful on its own.

Minecraft on XBLA does promise updates, but with Xbox's track record there, I'm not holding my breath (unless I get stuck underwater again).

For those who find Minecraft doesn't offer a goal clear enough to qualify as a game, here's one that you can strive toward on either version: Wall off a 20x20 area directly next to a cavern opening, from which much grumbling and clacking can be heard. Open a path to the cave and try to survive for as long as possible. For every 20 skeleton bones you collect, shrink the area by two blocks. Enjoy your zombie meat, monster bait.

This Deja Review is based on an XBLA download of Minecraft, provided by Mojang.
In this article: deja-review, Markus-Persson, microsoft, Minecraft, mojang, notch, XBLA, xbox, Xbox-360, Xbox-Live-Arcade
All products recommended by Engadget are selected by our editorial team, independent of our parent company. Some of our stories include affiliate links. If you buy something through one of these links, we may earn an affiliate commission.