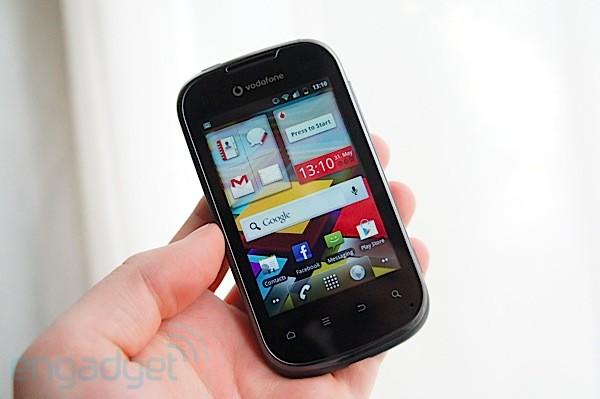 UK carriers often like to elbow their way into the limelight when a rival's getting some attention. This time, Vodafone's cutting into Orange's Intel excitement with the Smart II; an update to its wallet-happy Android device from 2011. The UK carrier even let us get some hands-on time with the pebble-sized phone. While the specifications (800MHz processor, 3.2-inch screen) aren't going to wow, at £70 (around $109) it could reel in plenty of feature phone graduates. Check out a brief hands-on video and our own impressions right after the break.

The Smart II is certainly an improvement on the predecessor, although since filming the hands-on video, we've been told that it won't get the same customizable covers. The phone is surprisingly solid, similar to HTC's smaller phones a few years ago, presumably due to the two-part casing that wraps around the back and sides of the phone.. The screen is perfectly bright enough, but does seem to attract smudges at an alarming rate. The 3.2-inch touchscreen is responsive but reminds us of a slightly smaller iPhone 3GS -- it's pretty grainy, even at this size. The hardware is actually the Alcatel-made V860 and while the 800MHz processor had enough oomph to handle light to middleweight web pages, it struggled with more media-rich content. For anyone moving on from a feature phone, they'll find the smartphone fundamentals are plenty serviceable.

Vodafone has thrown in a new gesture feature where you can flip the device to silence calls and there's some pre-installed apps aimed at the smartphone beginner, although we'd prefer to do away with those heavy Vodafone widgets. Fortunately, they're easily dispatched. The phone also improves on all areas compared to the original Smart, with a bigger screen and zippier processor, but if you plumped for the original you're probably ready for bigger screens and bigger price tags. But at this price, the Smart II looks to be an admirable low-rung smartphone, if slightly petite compared to recent entry-level competition.

In this article: 800Mhz, Alcatel, Alcatel V860, AlcatelV860, Android, Android 2.3, Android2.3, Gingerbread, Google, hands-on, mobilepostcross, mobilepostmini, Smart II, SmartIi, UK, V860, video, Vodafone, Vodafone Smart II, Vodafone UK, VodafoneSmartIi, VodafoneUk
All products recommended by Engadget are selected by our editorial team, independent of our parent company. Some of our stories include affiliate links. If you buy something through one of these links, we may earn an affiliate commission.
Share
Tweet
Share