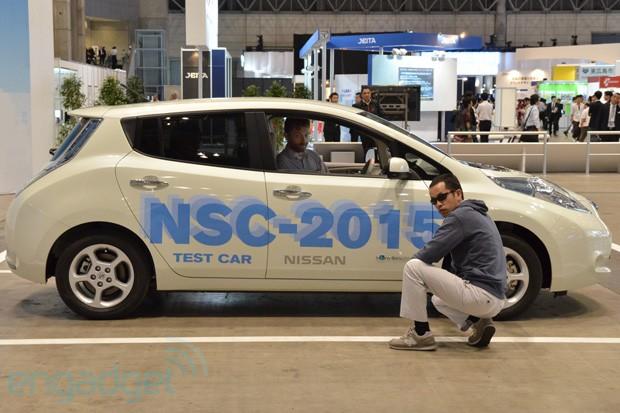 NCC-1701 is the machine that took the world's imaginations to strange new worlds in the '60s. If Nissan has its way, NSC-2015 will be the machine that keeps us out of strange new parking lots. It's a concept car from Nissan, part of the CEATEC 2012 Smart Mobility Zero exhibit that has half the show floor covered by crazy electric-powered cars of all shapes and sizes. Nissan's Leaf is one of the more conventional looking ones, but the technology that lets it drive itself down the road is far from standard. We just took it for a spin, so please cruise down past the break to read how it went.

From the outside, if you ignore the decals, the NSC-2015 looks like any other Leaf. That is to say, a bit unusual but far from unconventional. It's only the piercingly bright RGB LEDs built into the steering wheel that give you a clue something is amiss as it drives across the show floor slowly -- that and the fact that there's nobody sitting behind the steering wheel.

Here at CEATEC the car is literally making the rounds, driving in circles around a stretch of concrete. Using a series of sensors, cameras and servos the car is able to turn the steering wheel plus activate the throttle and the shifter to navigate across this stretch of road, relying on the road markings painted on the floor to both keep it driving in a straight line and to have it stop, respectfully, at the crosswalk.

The idea is the car could drive itself down the street, find a parking spot and tuck itself in there -- and then return to you at the touch of a button. Not quite KITT-style but it could at least put some valets out of work. However, due to current legalities that's not entirely possible, as someone must be sitting behind the wheel. But, in a private parking lot it could at least navigate the aisles without you onboard.

While all this is going on you can watch the status of the car remotely on a smartphone, as the car has an integrated LTE connection. You can see where the car is, where it's going and even get a notification whenever it has detected that someone is tampering with it. You can then bring up a full 360-degree view of what's going on around the car and, if you see something shady, set off a car alarm remotely. This was demonstrated on a Galaxy S III.

Our test ride was short, just out and back with a U-turn and a few stops in the middle, but it was enough to leave us impressed -- especially since Nissan believes it could have the system in production cars by 2015. In this case it would primarily be used for driver assistance, automatically stopping if someone steps out in front of you. But, if Nissan can bring automatic, smartphone-controlled parking too, we think it'll be something worth getting excited about.

In this article: ceatec, ceatec 2012, Ceatec2012, concept car, concept cars, ConceptCar, ConceptCars, electric vehicle, ElectricVehicle, ev, hands-on, leaf, nissan, nissan leaf, NissanLeaf, nsc-2015, video
All products recommended by Engadget are selected by our editorial team, independent of our parent company. Some of our stories include affiliate links. If you buy something through one of these links, we may earn an affiliate commission.
Share
Tweet
Share