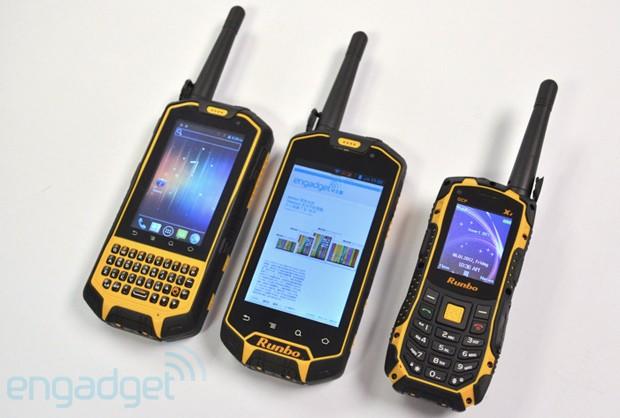 We've seen a handful of rugged Androids in our time, but none are as affordable and as weird as these ones at CES. The backstory here is that a couple of Chinese guys in camouflage gear approached us at our CES stage, and after an awkward conversation, it turned out that they just wanted to show us the three rugged phones they brought all the way from Shenzhen. Starting from the right we have the Runbo (like Rambo?) X1 IP67-certified featurephone cum walkie-talkie, which packs a 2-inch 176 × 144 display, a 0.3-megapixel front-facing camera, a laser pointer, quad-band GSM plus 800MHz CDMA cellular radios, 400 to 470MHz range for the software-configurable walkie-talkie (parts of the spectrum may require a licence, depending on your country), a surprisingly loud speaker and a 2,200mAh battery. This will be available for ¥980 or about $160 on Taobao online store (the Chinese equivalent of eBay) in the next couple of days, and we've been told that there will also be a variant with GPS added.

But the real stars of the show are the two brick-sized vanilla Android 4.0.4 devices. The phone pictured in the middle is the Runbo X5, a device featuring a 1GHz dual-core Cortex-A9 MTK6577 chipset, 1GB RAM, 4GB storage, microSD expansion, a 4.3-inch 800 x 480 IPS display, an app-triggered laser pointer, an eight-megapixel main camera, a 0.3-megapixel front camera, a super loud speaker (again) and a massive removable 3,800mAh battery. And yes, this also comes with a 400 to 470MHz walkie-talkie radio (up to 10km range; with detachable antenna), along with the additional 850/1900/2100 WCDMA radio, two SIM slots (WCDMA plus GSM), WiFi, Bluetooth 3.0 and GPS. These specs are the same for the Runbo X3 on the left, except for the smaller 3.5-inch 800 x 480 IPS panel to make space for the QWERTY keyboard below it. The best part here are the prices: both of these IP67-certified devices are available on Taobao or the official website for just ¥1,999 or about $320, which is a bargain for both the ruggedness and the fact that these double as standard walkie-talkies. US folks can also order directly from eBay for $380, which is also a steal. But does this surprisingly low price reflect the quality? Find out in our hands-on after the break. Admittedly we went a bit crazy with the rugged phones (who wouldn't?), but that was only after seeing CEO Jemes Yang (yes, it's Jemes) scaring us a few times by randomly dropping his own devices. What confidence! Interestingly, Yang straight up admitted that his company, Tintele, used to make shanzhai phones, but the direction changed after spending a year developing the bulky Runbo phones. Did the devices live up to their promise of ruggedness? Well, yes and no. While all three devices had pretty decent build quality and took no water damage, we did manage to crack the X5's glass after a few drops onto the concrete. Yang reckons it's because compared to the similarly-shaped X3, the larger screen on the X5 is much closer to the edges, so he'll try to remedy that by increasing the thickness of the surrounding rubber and plastic. As for the software, we didn't get to play long enough to judge its multimedia performance, but the native UI was slick. We shall share more thoughts once we get hold of some review units, so stay tuned.

Photos and video by Ross Wang from Engadget Chinese.

In this article: android, ces, ces 2013, Ces2013, china, hands-on, mediatek, mobilepostcross, mtk6577, phone, rugged, runbo, smartphone, video, walkie talkie, walkie-talkie, WalkieTalkie, waterproof
All products recommended by Engadget are selected by our editorial team, independent of our parent company. Some of our stories include affiliate links. If you buy something through one of these links, we may earn an affiliate commission.