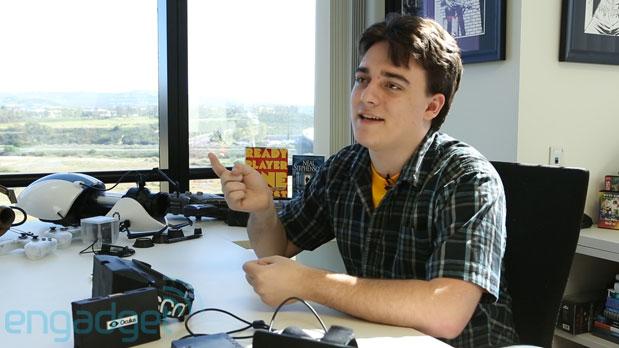 As geeks, we have a tendency to let our imaginations run away with us. Science fiction-fueled dreams conjure up images of flying cars, robots and artificial reality. We judge our gadgets by the arbitrary standards of famous speculative works: hoverboards by 2015 and a holodeck in every home. It's a silly and unrealistic way to measure our progress, but it inspires us to build the future we're tired of waiting for. This is the kind of passion we found at Oculus VR headquarters, where founder Palmer Luckey and a platoon of software engineers, hardware gurus and marketing wizards hope to make virtual reality a plausible reality. We sat down with the company's aforementioned founder and VP of Product Nate Mitchell to find out where that passion came from and where Oculus VR is heading.

"Before the Rift, I worked on a lot of different things," Luckey says, recalling memories of his parent's garage. "I was a hacker, an electronics modder. I worked a lot on modifying game consoles, building computers and making little electronic doodads."

Like many, Luckey was lured to the world of electronic tinkering by the modding exploits of Ben Heckendorn, who eventually inspired the young builder to create his own console-modification community, ModRetro, with a simple motto: learn, build, mod. It wasn't long before Luckey's love of modding crossed paths with his interest in virtual reality.

"I really just wanted to go out and buy a virtual reality headset," Luckey tells us, reliving the frustration that led to the creation of the Oculus Rift. "I couldn't find anything that I wanted to buy, so I made the foolish decision of saying 'I bet I could make something.' I wasted a few years doing it," he jokes. "But it was a really fun hobby."

Luckey's early prototypes were unpolished amalgamations of other devices, culled from what he believes to be the largest personal collection of head-mounted displays in the world.

"I keep trying to find someone to prove me wrong so we can be best friends." he says, laughing. "A lot of my early prototypes were built off of parts that I cannibalized from these units, and there were a lot of things I got that I wound up upgrading with more modern displays. One head mount might have really great optics, but another would have more modern displays -- I was able to put the better displays in the older optics and get a pretty cool thing."

These projects were the foundation of what would eventually become the Oculus Rift, though you wouldn't know it from looking at them.

"I named them in order," Luckey says, describing his early HMD (head-mounted display) prototypes. "It wasn't a very creative naming scheme. PR1 was the first, for Prototype 1."

This first unit wasn't even in 3D. It was a far cry from Luckey's current stereoscopic headgear, but in a way, it inspired the Rift's current design. While planning a follow-up project, Luckey had a breakthrough: the panel he used on the PR1 had an active area that was 120.96mm wide -- almost double the average human interpupillary distance (the distance between the center of the left and right pupils). A plan quickly formed: instead of using two displays to build a 3D head mount, Luckey figured he could do it with one. The resulting device, the PR2, wasn't very good according to Luckey, but it served as a proof of concept. The prototypes added and dropped features as they went. The PR1, for instance, had a motor from an Aura Interactor embedded on the back, but Luckey found the force feedback too painful, and didn't carry the tweak over to future models. The PR3, PR4 and PR5 all had wireless capabilities, but it took a backpack to lug around the necessary tech. This too, was nixed. Luckey revised his design as he went, sharing his progress with like-minded modders on online forums.

"The PR6 was the first one that I never got around to releasing a public write up of; I just made it," Palmer explains. "That was the one I ended up sending to [id Software's John] Carmack and ended up calling the Rift. He still has what would be called the PR6."

Carmack took that headset to E3 2011, garnering attention from not only the public, but from a trio of industry veterans that would help Luckey build Oculus VR into what it is today: Brendan Iribe, Michael Antonov and Nate Mitchell.

"We were actually introduced by a mutual friend of Brendan and Palmer," Mitchell remembers. "As soon as we saw a demo, it really became clear that we had to invest in this thing ... We helped Palmer reboot the Kickstarter, and pretty shortly afterwards everyone joined the company."

Iribe, Antonov and Mitchell have some experience with fledgling startups. Iribe helped Gaikai catch Sony's attention, and before that, he worked with Mitchell and Antonov at Scaleform, which was eventually bought up by Autodesk.

"Brendan and Mike worked at Scaleform for a long time," recounts Mitchell. "They really built it up from the beginning to what it was: a multimillion-dollar company. I think with Oculus, it's sort of the same thing -- we really want to change the way people play games."

Given the team's success at building up young companies that were later absorbed into larger corporations, we wonder aloud if Oculus was destined to follow a similar path. Mitchell assures us it wasn't, citing the company's vision of creating a complete platform for virtual reality development. Luckey chimes in with agreement.

"I have no visions of selling at this point," he says. "My goal was never to make a company or to sell a company, it was to make virtual reality and -- later, after I realized it was going to happen -- make it available to everyone."

For now, "everyone" means developers.

"We really believe at Oculus that hardware is really only as good as the content it runs," Mitchell explains. Putting Luckey's stereoscopic ski goggles in the hands of game developers is key to the Rift's success.

Distribution is the name of the game, and it's why we dropped by Oculus' offices in the first place: the company's first professionally manufactured VR development kit is finally ready for consumption. With adjustable optics, a more supportive headband and a prominent 7-inch display, it easily outshines its hand-built predecessor. More importantly, it will soon be available to anyone with a few hundred dollars and an interest in VR.

"We're fulfilling all the Kickstarter rewards and then moving on to pre-orders," Mitchell explains. "That's going to start very soon, mid-March."

Folks who missed the bandwagon won't have to wait long either, he says, explaining that Oculus is building more development kits than it expects to sell, specifically to have stock ready to ship at a moment's notice. Oculus' engineers will spend the next few months fleshing out the HMD's SDK, aiming to give developers the tools they need to build great VR experiences.

"We've already got Unreal Engine 3 and Unity integration, but beyond that we want to add Mac support, Linux support and we want to continuously improve our feature set," Mitchell tells us. "Things like sensor fusion, predictive tracking, head and neck modeling ... All this stuff is going to get better over time."

More hardware is on the way too; Luckey tells us the Rift Development Kit and its companion SDK are only the beginning. "It needs to be an entire platform, not just a developer kit with an SDK," he says. "We're experimenting with haptics, different motion-control devices and different input devices, but it's really hard to say where we're going."

The founder goes on to explain that developer feedback will dictate what sort of features we'll see in the eventual consumer model.

With any luck, that input will start rolling in soon: Valve is preparing to update its popular free-to-play shooter, Team Fortress 2 with a Rift-compatible VR mode, openly describing the update as an experiment. Valve's Joe Ludwig says that the TF2's robust community is ideal for testing out the new technology, and both companies are eager to see how the community reacts.

The Rift still has a lot of growing to do before it's ready for store shelves. Luckey says it still needs to be lighter, and more comfortable to wear. Oculus hopes to find a smaller, higher-resolution display for the consumer version, lightening the user's load while increasing visual fidelity. Unfortunately, our hosts wouldn't hazard a guess on availability.

"A big part of it is waiting for great game content to be available," explains Mitchell. "We really want to deliver the best experience, and if it takes a little bit longer to get there, then that's what we'll do. Game developers will be able to tell us when it's ready."

Mark Hearn contributed to this report.

In this article: interview, natemitchell, oculus, oculus rift, OculusRift, PalmerLuckey, timeline16oculusrise, video
All products recommended by Engadget are selected by our editorial team, independent of our parent company. Some of our stories include affiliate links. If you buy something through one of these links, we may earn an affiliate commission.