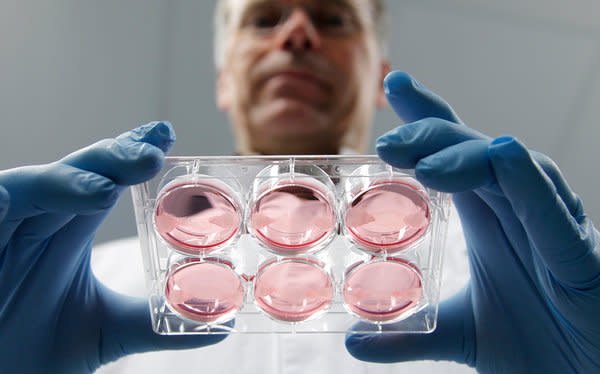 Dr. Mark Post of the University of Maastricht has carefully cultivated the most expensive burger you will probably never eat. Using stem cells and the science of tissue engineering, Post and his team have developed a method for creating an edible product called in-Vitro meat, which they hope to present in burger form at a special event in London next month. Despite the burger's artificial origins, Post claims it "tastes reasonably good."

The in-Vitro burger was designed as a proof-of-concept to address the problem of a growing global population with a rapidly dwindling food supply. Even so, it's unlikely that lab-grown meat will be as widely available as White Castle anytime soon since creating it is an expensive, time-consuming process -- a single burger costs about $325,000 to produce. Each pricey patty begins its life as cells sourced from the necks of slaughterhouse cows, which are then developed in a growth serum comprised of fetal calf stem cells. After three weeks, those cells divide into a strip of meat, about half an inch long. Combine about 20,000 of those tissue strips and you've got yourself a burger. If that doesn't get your taste buds tingling, we don't know what will.

In this article: food, hamburger, hamburgers, In-vitroMeat, MarkPost, science, UniversityOfMaastricht
All products recommended by Engadget are selected by our editorial team, independent of our parent company. Some of our stories include affiliate links. If you buy something through one of these links, we may earn an affiliate commission.