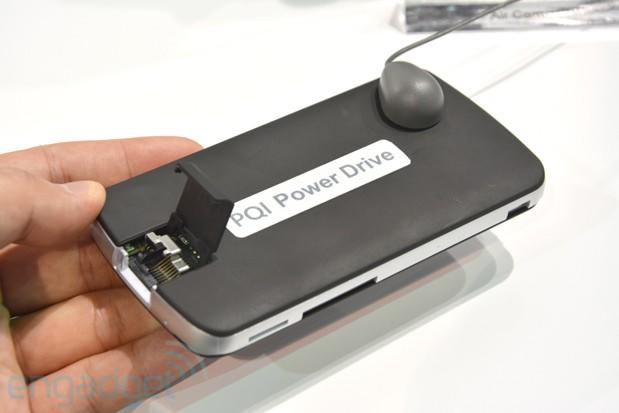 After showing off its USB OTG accessories and NFC flash drive, PQI decided to tease us with its unannounced Power Drive that was sat quietly in a corner at Computex. Much like the Air Pen launched last November, this upcoming device acts as a portable wireless access point with storage expansion, meaning you can share an RJ45 network connection and your files over WiFi. But what's new is that not only is the RJ45 port collapsible to reduce device thickness, there's now also a standard SD card slot in addition to the old microSD slot. Better yet, as the name suggests, the Power Drive can also be used as a USB power bank to charge up other devices, making this PQI's most versatile WiFi product yet. Alas, details are light on the specs, so stay tuned for its announcement at some point in Q4 this year. 7
In this article: accesspoint, ap, battery, computex, computex2013, featured, features, hands-on, network, powerbank, powerdrive, pqi, wifi, wireless
All products recommended by Engadget are selected by our editorial team, independent of our parent company. Some of our stories include affiliate links. If you buy something through one of these links, we may earn an affiliate commission.