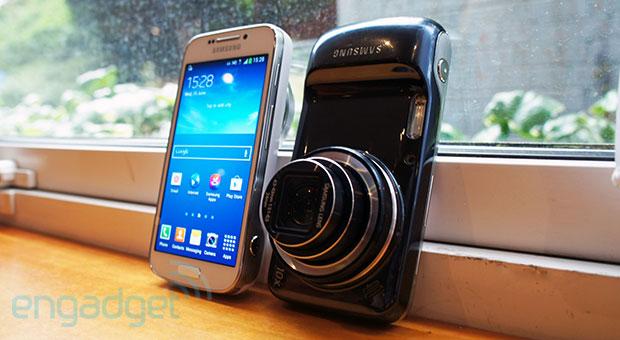 It's easy enough to describe the Galaxy S4 Zoom, since it's essentially a Galaxy S4 Mini with a 10x zoom lens stuck on the back. But that sort of summary doesn't do it justice. When you hold the phone-slash-camera and look at the optically stabilized image captured by its 16-megapixel, point-and-shoot grade sensor, you begin to realize that -- at least for those who do a lot of snapping and sending -- this combo of components holds some serious power.

Just like the first Galaxy Camera, it's all about fun and immediacy: the ability to edit, organize and share decent-quality images using Android apps and cellular data connectivity. The key advantages are that the GS4 Zoom can work as a regular phone for voice calls, and that it's just about portable enough to be used that way, whereas the Galaxy Camera was a lot bulkier. With these gains, the smaller zoom (10x instead of 21x) and lower-res screen (qHD instead of 720p) don't overly faze us, so long as the final selling price takes it all into account. Ultimately, our only hesitation is the impending arrival of the so-called Nokia EOS, likely due on July 11th, which takes a totally upside-down approach to smartphone photography and is likely to be much more pocketable as a result. Those are two devices we can't wait to put head-to-head, especially in terms of image quality, but our hands-on gallery (and impending video) might help to tide you over in the meantime. 15
In this article: android, galaxycamera, galaxys4zoom, handson, mobilepostcross, samsung, samsungpremiere2013, video
All products recommended by Engadget are selected by our editorial team, independent of our parent company. Some of our stories include affiliate links. If you buy something through one of these links, we may earn an affiliate commission.