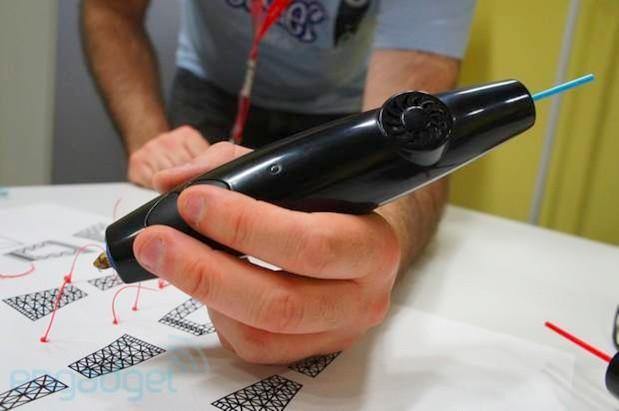 Remember the 3Doodler? Odds are plenty of you do, seeing as how the company managed to nab a staggering $2.3 million for its $30,000 Kickstarter campaign. For the minority of you who didn't participate, here's a quick refresher: the device is a 3D printing pen. It's a bit like a hot glue gun for plastic -- simple and ingenuous, it melts a single strand of ABS or PLA, allowing you to draw objects in the air, solidifying as you draw up.

The pen was still in early prototype phase when we first saw it, and now, here at IFA its co-creator Max Bogue is showing off the final shipping product (seeing as how Kickstarter funders will be getting theirs later this year). This 3Doodler actually looks pretty similar to that early unit. All the same elements are in place: a slot in the rear to feed in the plastic, the heated tip where it comes out in semi-liquid form, an exhaust fan (which is pretty loud, but should quiet down before people start to get theirs) and two buttons for fast and slow extrusion. Bogue tells us that the exterior will get a little detailing on the final, final version, so it won't be just black. Also of note is the fact that the pen is a lot lighter than the last time we played with it. We still had a little trouble drawing in the air with it -- there are certain tricks like digging it into the paper to make sure its stands and quickly yanking the pen away when you're done. We're sure we'll be 3Doodler da Vincis by the time the $99 device ships to non-Kickstarter buyers early next year (February at present, though the company is hoping that it will be able to fill all orders ahead of schedule).

In this article: 3d printer, 3d printing, 3doodler, 3dPrinter, 3dPrinting, hands-on, ifa, ifa2013, kickstarter, video, wobbleworks
All products recommended by Engadget are selected by our editorial team, independent of our parent company. Some of our stories include affiliate links. If you buy something through one of these links, we may earn an affiliate commission.