How the iPhone took Nokia down 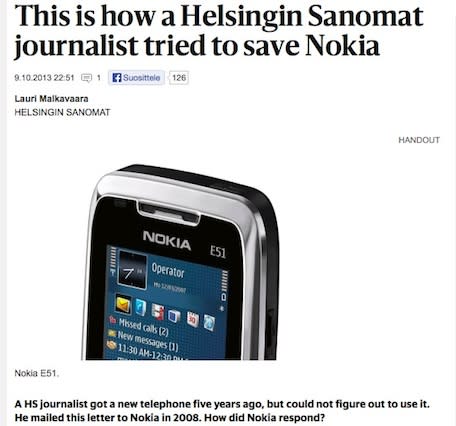 The once-mighty have fallen. Nokia's Symbian smartphone OS was, not too many years ago, the platform of choice. Now, says Daniel Eran Dilger at AppleInsider, the company is being sold off for scrap. He relates how a Finnish journalist for Helsingin Sanomat wrote a letter to the company in 2008 noting that a recently acquired Nokia E51 smartphone was almost impossible to use compared to an iPod touch purchased after seeing a friend's device.

Journalist Lauri Malkavaara's missive to Nokia stated that "I ordered my own iPod touch, turned it on, and knew immediately how to use it. I have used the device now on a daily basis for over six months, and I have not even thought about any manuals. The logic of the device opens up right away. It is no wonder that it is a huge success all over the world."

Malkavaara then went on to describe how difficult it was to figure out how to do just about anything on the Symbian phones that were being sold at the time, concluding with "By putting a telephone like the E51 onto the market, Nokia has squandered its most important legacies: to produce telephones in such a way that they are easy to use. This will cause problems for Nokia."

Instead of listening and changing the design strategy for Symbian, Malkavaara says that "Nokia bosses started calling me, wanting to explain Nokia's strategy."

Things changed; after the launch of the iPhone, some Nokia executives realized that Symbian was in trouble. Executives were given iPhones for competitive analysis, and one gave the phone to his 4-year-old daughter, who of course figured out how to use it in no time. The executive said that he "knew Nokia was in trouble" when his daughter asked if she could "take that magic telephone and put it under my pillow tonight?"

The AppleInsider post goes on to talk about how Symbian stalled after the iPhone 3G was released, which was before any Android phone had shipped. At the same time, BlackBerry was beginning to implode as well. Nokia tried, but failed, to regain relevance and marketshare with the MeeGo and Windows Phone 7 operating systems.

It's a sobering story of how quickly a company can lose focus and fall from grace.

In this article: helsingen sanomat, HelsingenSanomat, iPhone, meego, nokia, symbian
All products recommended by Engadget are selected by our editorial team, independent of our parent company. Some of our stories include affiliate links. If you buy something through one of these links, we may earn an affiliate commission.