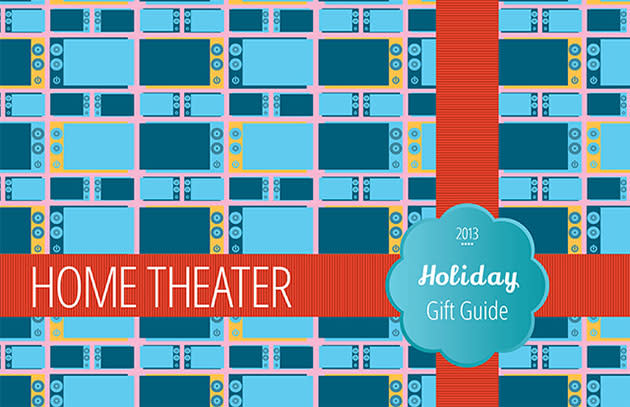 For many of us, "home entertainment" systems can be tucked in backpacks or propped up on an airline tray table. For diehard media fanatics, however, such lightweight solutions won't do. If you or someone you love knows their LCD from their plasma -- and you have the money to spend -- the TVs below are sure to please. The days of 4K may still be early, but, hey, nothing makes watching Planet Earth more social than a giant, brilliant set. Even if your wallet isn't fat, you can upgrade a living room with our favorite set-top boxes and TVs. After a long night of swilling hot toddies, there's nothing I love more than serving my best Downtown Julie Brown for my properly toasty guests. There are endless ways to get that YouTube Yule log up on your TV screen, but this little dongle is by far the easiest (and cheapest) streaming-video solution I've come across. If your giftee fancies herself a modern-day VJ, or spends endless hours hooked on Netflix or Hulu, it's a no-brainer. Just make sure they've got a steady WiFi connection and a TV with an HDMI port before you pull out your wallet. -- Christopher Trout, Managing Editor The Chromecast and Apple TV are great, don't get me wrong, but nothing compares to the Roku for sheer versatility. The granddaddy of streaming set-top boxes draws from the deepest library of content sources, including unique channels like PBS, Redbox Instant and UFC TV. You can even connect to a Plex server and stream music and movies you might have acquired through less official means than Amazon's store. -- Terrence O'Brien, Deputy Managing Editor While Microsoft may have put its Media Center software on the back burner with the release of Windows 8 and the Xbox One, the folks at Ceton delivered not one, but two reasons to stick with the HTPC dream this year. Along with its counterpart USB edition, this six-tuner card transforms a standard desktop into a powerful and easily configurable cable DVR. For $299, it's perfect if you know a techie that loves both TV and DIY projects. -- Richard Lawler, Senior Editor There are much more expensive subwoofer options out there, but for $300, the Klipsch Sub-12HG Synergy Series 12-inch bass machine is the way to go. It reproduces the lowest frequencies the human ear can perceive and makes for a solid addition to just about any home theater system. What's more, it delivers gobs of drama to whatever you're watching without inflicting a serious wound to your bank account. -- Timothy J. Seppala, Contributing Editor TiVo is back, and with the Roamio Pro it's almost ready to deliver on the "do-everything" box promises made by its previous DVRs. Upgraded internal hardware means these run faster and smoother than ever, and they now even deliver recorded and live TV to mobile devices (iOS now; Android coming soon.) App support is still a bit limited and, with lifetime service, the upfront cost adds up quickly, but look no further than this for the best cable experience money can buy. -- Richard Lawler Looking for a huge TV that won't leave a huge hole in your wallet? Panasonic's mid-priced plasma series has a great color range, deep blacks and wide viewing angles, and comes in at a price well below the company's higher-end models. Moreover, it's available in sizes from 50 inches all the way up to 65 inches. -- Marc Perton, Executive Editor Want to pamper a home theater junkie? Pick up a Samsung F9000 TV. Its Ultra HD (4K) screen is about as sharp as it gets, and its support for Evolution Kit upgrades should keep the set relevant for more than just a few years. The F9000 is even relatively affordable; now that it costs less than $4,000 for a 55-inch model, it's a realistic choice for many who would have otherwise been stuck with a 1080p equivalent. -- Jon Fingas, Associate Editor Panasonic may be shutting down its plasma TV production line entirely, and while that might be reason enough to snag its flagship display, the ZT60's unparalleled picture quality should be what pushes your favorite videophile over the edge. At 65 inches, it's not the biggest screen out there, but the fact that it can stand toe to toe with Pioneer's vaunted Kuro models in terms of picture quality makes up for any perceived shortcomings regarding size. -- Timothy J. Seppala Even with Sony's 4K media player and "mastered in 4K" Blu-ray discs, it's still a mostly HD world, but the X900A handles lower-res sources well. Toss in a Blu-ray (especially an impressive 3D presentation like Pacific Rim, or Gravity when that comes home) and you'll have an experience previously only possible in the theater. The $5,500 list price puts a hefty premium on those extra pixels -- especially if you're sitting far away -- but a coming update to HDMI 2.0 gives the early adopter on your gift list the promise of being future-proofed for whatever comes next. -- Richard Lawler

Sony's speaker is ready and waiting for your holiday playlist. Connect your gadgets via the aux input or stream via Bluetooth. There's also a built-in USB port for charging smartphones and tablets. Enter the raffle below for a chance to make it yours, and be sure to check out our giveaway rules.

In this article: 65X900A, chromecast, google, HGG, hgg2013, klipsch, panasonic, roku 3, samsung, Samsung F9000, sony, st60, Sub-12HG, tivo roamio pro, X900A, XBR-65X900A, zt60
All products recommended by Engadget are selected by our editorial team, independent of our parent company. Some of our stories include affiliate links. If you buy something through one of these links, we may earn an affiliate commission.