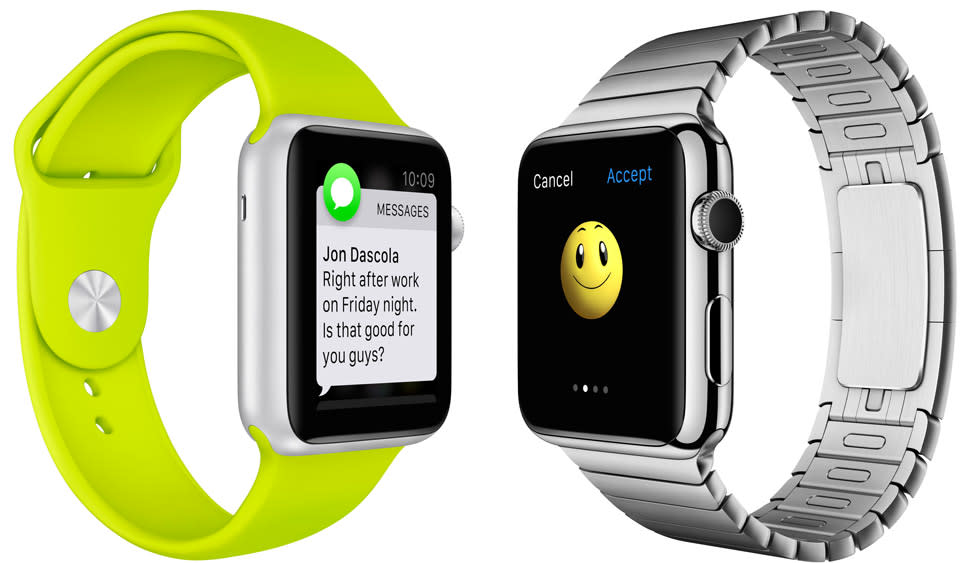 After months of speculation, Apple finally announced its long-awaited wearable -- Apple Watch. What now? Well, if history has anything to teach us, it should do pretty well. The iPod, iPhone and iPad have all been success stories. What's more, all of them took an existing product category, and gave it a good shake up. Despite this, there are still some who doubt the public's appetite for a smartwatch. Is Apple Watch the shot in the arm that wearables need? Or is it that rarest of things: a "me too" Apple device?

No one knew what the long-rumored Apple wearable would look like (or even what it would do), but CEO Tim Cook ended the mystery today announcing the Apple Watch on stage at the company's Cupertino event. As suspected, Apple Watch isn't just a fitness tracker, a phone notifier or a payment device -- but it does do all of those things (and more). Despite all the hyperbole though, let's not forget that the Apple Watch isn't Cupertino's first dalliance with wearables.

It already sells a host of health trackers via its online store, not to mention a fitness tracker of its own (well, at least 50 percent) and a media player that got close to our bodies, long before Gear or Glass showed up. But, the collaboration with Nike and the iPod nano strap were accessories. Apple Watch is Cook-and-co's first flagship product in a category that many feel has yet to endear itself to consumers -- hoping that Apple might be the company to change that. Currently, US wearable device sales estimates vary wildly from the conservative "1 percent of equivalent mobile sales" to the hopeful (and unsourced) "$8 billion," through to the more grounded, optimistic outlook. It's a confusing situation, one that's ripe for some Apple pragmatism. If we've learned anything over the last few years, it's that there's an, ahem, healthy interest in fitness trackers (why else would there be so many?). Smartwatches have had their moments, too. But, no matter what the wearable, the same pain points keep coming up again and again: bad/utilitarian design, limited standalone functionality (aka requires a phone for much of the time) and poor battery life. That's disregarding the more nuanced issues of user interface and practical features. Pebble has shown us that battery life and a wealth of (good) apps can get you a long way. Nike showed us that a marketing budget, good design and a promise of better abs health would also help open wallets. As for a phone companion/notifier? That was the basis of so many smartwatches, for so long, that it was amazing it took as long as it did for a company like Google to come along with something more imaginative with Android Wear.

Apple's approach? Well, if you were hoping it would slay all the wearable dragons, sadly that's not the case. For starters, the design will be divisive. While it very much is in keeping with the new iPhones, and Apple's usual Jony Ive touches, it's hard not to be a little disappointed that it really doesn't give cause for any Swiss watchmakers to be worried. Sure, there are probably more customization options than any other smartwatch out there right now, but ultimately, if you imagined what an "iWatch" would look like before today's event, you probably wouldn't have been far off. So, what about the other pain points?

Perhaps the Apple Watch's most limiting factor is its dependence on the iPhone -- it's another companion device à la Android Wear. If you have an iPhone 5 or newer, you're good, but it still means you're fully tied into Apple's universe. Completely. It's not that surprising, but there was always hope Apple would break the mold and blow our minds with an unexpected "third way." There will of course be dedicated, third-party apps. But, many of these will lean on your phone for some of the muscle just like every other smartwatch. On stage, the Apple Watch was shown off working with maps... yet there's no GPS in the device; it uses the location data from your phone. No problem you say, but then why has no other watch that does this caught on? I'm sure there will be some creative dedicated apps that will make Apple Watch useful beyond the handset, but it's a shame that it's essentially another tethered device.

"More than 10 sensors" was the word on the street (or, in this case, The Wall Street Journal). The reality is less generous -- or, at least, open to interpretation. We do know there is a heart rate monitor (that uses infrared and visible-light LEDs and photodiodes), and an accelerometer, but GPS and WiFi from your phone are needed for accurate distance (and mapping). This hobbles any real sporting potential, as lugging a phone on a run is a burden we need to move away from, not entrench ourselves in further. Given Apple's long-running relationship with Nike, and the recent unveiling of its own HealthKit platform, there was little doubt that an Apple wearable would have fitness credentials. But, if you were hoping it would be usable as an independent running device, that's not the case.

If the current wearable situation could be distilled into one problem, battery life would be a good contender. It was rumored that Apple would have a wireless-charging option, which turns out to be mostly true. The Apple Watch uses a MagSafe with inductive charging. So there's no Lightning port to contend with at least. Sadly, there was no reference to specific battery life, apart from the telling, yet throwaway, comment regarding daily charging. This could turn out to be Apple Watch's Achilles' heel (along with almost every other smartwatch, just so we're clear). NFC and Apple have been like oil and water for so long that when the whispers about the tech finally coming to the iPhone started, it seemed almost as unlikely as the company buying Beats. The addition of NFC is potentially Apple Watch's secret weapon. One of the big announcements at the event was Apple Pay, a wireless NFC payment system for the new iPhones. The good news is: It's also coming to Apple Watch. This means you can pay for coffee, food and basically anything else with the timepiece. Apparently, NFC in the wearable will be put to other uses too: W hotels will let you use Apple Watch as your room key. It's here that the device has the biggest chance to prove more useful than the rest (thanks in part to the strong developer support that Apple enjoys).

So, the Apple Watch, at first glance, doesn't appear to have addressed many of the basic challenges that other wearables have struggled with. This truly is a shame. If any company had the creative team, and resources to take a step back, and create something that cuts through the nonsense, it's Apple. If there was a hope that all those ongoing hires would pay off, then it looks like it's going to be further down the line, hopefully between now and the device's release next year. Perhaps LG's Sung Jin Lee summed up Apple's real impact best when he said, "If Apple offers its own product, it will expand the market." It's not the technology in this first-generation device that will change how we see wearables; it's the developer interest, and increased public awareness that comes with it.

There's a common, well-worn idea that new mobile technology won't get mass adoption until Apple incorporates it in its products. But, in the case of wearables, it could very well turn out to be true. Apple Watch will no doubt introduce high-street shoppers, not just to the idea of technology you can wear, but also to the idea of connected lifestyle services such as wireless payments and fitness logging. Apple Watch will bring health tracking, touch-based payments and (who knows) maybe even home automation out of the marketing presentations and into the mainstream. Something that stands to benefit makers of all wearables. With Google announcing similar features in Android L, and the corresponding support in Android Wear, you can bet 2015 is the year we finally see the smart-i-verse truly come together. It's just a shame we didn't see the "so this is how it's done" product that the iPod has come to symbolize.

Apple Watch isn't the cure for all of the problems that wearables face, it's not really even a bandaid. Ultimately, Apple released a product that looks too much like everything else on the market for it to create a change in the zeitgeist, but it's not entirely without merit. It's no longer about if wearables will catch on (there seems to be little choice on that anymore); it's how soon we can get past seeing them as an accessory, something separate from our inevitable technological future. Through public awareness alone, Apple Watch will be the biggest step toward that future yet, but it looks like we'll have to wait for Apple Watch 2 for stronger pain relief.

In this article: apple, apple watch, mobilepostcross, wearable, wearables
All products recommended by Engadget are selected by our editorial team, independent of our parent company. Some of our stories include affiliate links. If you buy something through one of these links, we may earn an affiliate commission.