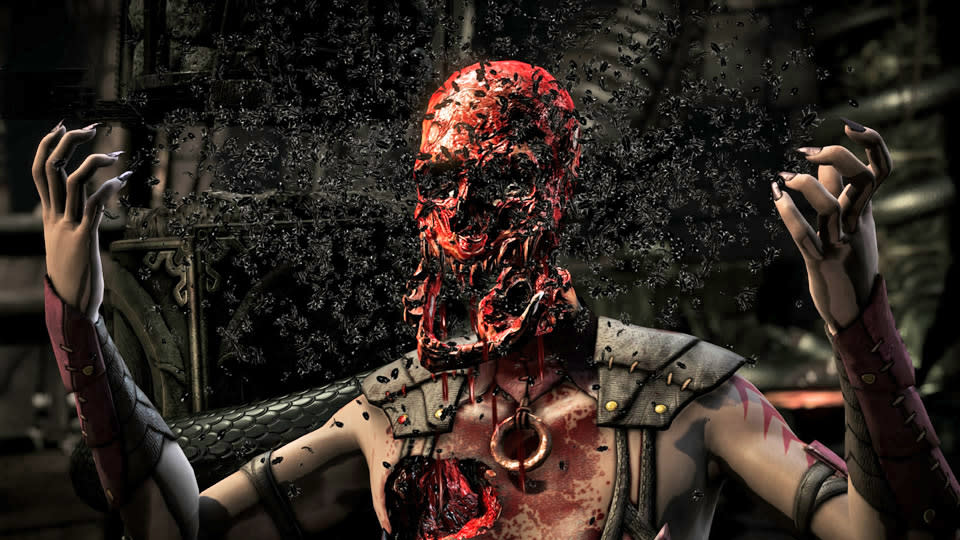 Mortal Kombat is synonymous with violence -- hell, it's baked into the franchise's name. But despite how increasingly gruesome the series has become with each successive release throughout its 23-year history, it hasn't lost sight of keeping the tone light as a counterbalance. Whether that's a head popping up saying, "Toasty!" in falsetto after a particularly brutal uppercut, or turning an opponent into a crying baby that slips on a puddle of frozen urine at the end of a match, humor is just as intrinsic to the game as its bloodshed. What the series delivers is cartoony, over-the-top violence akin to the B-movie horror of something like Peter Jackson's Dead Alive. Fatalities, Mortal Kombat's signature, end-of-match moves, are shockingly gory, for sure, but somehow developer NetherRealm keeps the game from feeling like torture porn.

"We're not out trying to make Saw or a horror film," says NetherRealm Lead Designer John Edwards. "We don't take ourselves too seriously."

To understand where the series' newest installment, Mortal Kombat X, gets its groin-exploding levels of violence from, though, you need to take a look at where it all started: the arcade.

Back in the early '90s, arcade games didn't have the multimillion-dollar ad campaigns afforded to modern releases, so to stand out from the crowd they needed to be bigger and louder than whatever cabinet was closest. "You have to hit people over the head with something that gets them to put a quarter in," says Dave Lang, CEO of Divekick and Killer Instinct developer Iron Galaxy Studios.

Lang worked as the studio tech director at Midway Chicago, MK's original developer, before the company dissolved due to bankruptcy in 2009. As he tells it, humor was a key factor to all of the games that came out of the studio: NFL Blitz, NARC, Revolution X, NBA Jam and, yes, Mortal Kombat.

"Mortal Kombat in general is the byproduct of kids in their 20s (us, 20 years ago) who grew up on '80s and '90s movies," says series co-creator and NetherRealm Creative Director Ed Boon. He cites hyper-violent action movies Terminator, Predator, Enter the Dragon and Bloodsport as direct influences, and it's easy to see how those made their way into the game. Consider the obvious example of Mortal Kombat's Johnny Cage, the not-quite-Jean-Claude-Van-Damme character. In general, though, it's mostly the over-the-top tone that ran rampant in 1980s cinema that pervades Mortal Kombat.

"Mortal Kombat is the byproduct of kids in their 20s who grew up on '80s and '90s movies," says series co-creator and NetherRealm Creative Director Ed Boon.

That level of nonstop violence is what makes the game so fun to watch -- it's the most brutal form of slapstick you'll likely ever witness. It's also relentless. Mortal Kombat's trademark fatalities and other vicious combos are entertaining precisely because they don't stop. For example, one of character Cassie Cage's fatalities starts with her kneecapping an opponent and then shooting them in the skull with a pistol.

Had NetherRealm stopped there, the resulting move probably would feel a lot darker than the actual end result. But that's where the levity, and the absurdity, of Mortal Kombat's violence comes into play: Cage, drenched by the still-spraying blood of her opponent's fresh wound, walks up and blows a bubble with her chewing gum. She then pulls the bubblegum from her mouth and plugs up the spurting wound. But that's not all. With no other outlet for the blood to go, it fills up in her opponent's head, blows a bubble of its own and then pops. Gross? Definitely. Upsetting? Not so much.

"We want people to cringe and then laugh about it at the end," says Edwards. "We never really try to shock someone and then leave it at that."

"The fatalities we have in the game are so over the top, 95 percent of the responses we get are laughter," he says. "It's like the Evil Dead movies: You can't take it seriously.

"If that ingredient [humor] wasn't there, it'd be a really dark game," Boon says, laughing.

What's more, keeping MK's tone consistent apparently isn't all that difficult. Fatalities are a team effort and everyone at the studio is welcome to pitch their ideas. With so much veteran talent in every department and a team that's worked on the series for over two decades, the boundaries of what's appropriate are already pretty well-known.

"We want people to cringe and then laugh about it at the end," says Edwards.

When I ask Boon if there's a line that wouldn't get crossed in terms of violence, his tone shifts dramatically, going from jovial to sober.

"We all know when it's crossed," Boon says.

For example, a fatality that involves slashing an opponent's wrists and then watching them bleed out would never make it into a Mortal Kombat game because real-world violence doesn't have a place in the series. Unless you happen to be a mystic ninja who can control fire, chances are you won't be blowing a hole through an enemy's torso with a fireball and slicing the front of their face off with a sword anytime soon. It's comic book or cartoon violence the team is after -- not realism.

"We try to not do things that are gratuitously cruel or realistic just for the sake of shock value," says Edwards. "Our shock value is more like 'Hey, that's impossible, but look how cool and creepy it looks.'"

And speaking of how it looks, that evolution in graphical fidelity is really what drives the game's gore system forward. The fatalities that sent former First Lady Hillary Clinton and former Sen. Joe Lieberman into a tizzy in 1993, and spurred the creation of the Entertainment Software Ratings Board, are nothing compared to what's in 2015's Mortal Kombat X. That doesn't mean the team is doing stuff it wouldn't have 10 or 20 years ago; it just means there are few, if any, tech roadblocks in the way.

Whereas two decades ago, ice-ninja Sub-Zero ripping an opponent's pixelated head off (with their spine still attached) pushed the limits of arcade hardware and home consoles, now he can shoot an ice ball at an opponent's gut, shatter it, reach inside their gaping torso, break their spine in two and then rip their body in half horizontally. And yes, that's totally something you can do with a few button presses in this week's Mortal Kombat X.

"It's obviously something to just get a response out of you. I don't know how you can get mad about that," says Lang. "It's brutal, but not cruel."

"I don't think we're doing anything that's any different than what we've done in the past," Edwards says. "Obviously we're able to do more, cooler things based on tech, but we've kept the same personality and style throughout all the games."

Mortal Kombat X isn't a massacre-simulator like the controversial PC game Hatred. Instead, it embraces the idea of grotesque violent comedy and puts the player in control of the slapstick. When Mortal Kombat's Johnny Cage peers through an opponent's ribcage saying, "Heeeere's Johnny!" it's the equivalent of metal band Gwar's Oderus Urungus force-feeding a fan to Gor-Gor the Dinosaur; it's silly and stupid and intentionally absurd.

"I've watched on Twitter whenever they've released a [Mortal Kombat] trailer and there's a predictable backlash," Lang says. "I just don't get it at all; it's just so obviously over-the-top, ridiculous and impossible. It's obviously something to just get a response out of you. I don't know how you can get mad about that. It's brutal, but not cruel."

In this article: Arcade, chicago, comedy, davelang, edboon, gaming, hd, hdpostcross, impressions, JohnEdwards, midwaychicago, mortal kombat, mortal kombat x, MortalKombat, mortalkombatx, netherrealm, PlayStation, preview, ps3, ps4, uk-feature, violence, xbox, Xbox360, XboxOne
All products recommended by Engadget are selected by our editorial team, independent of our parent company. Some of our stories include affiliate links. If you buy something through one of these links, we may earn an affiliate commission.