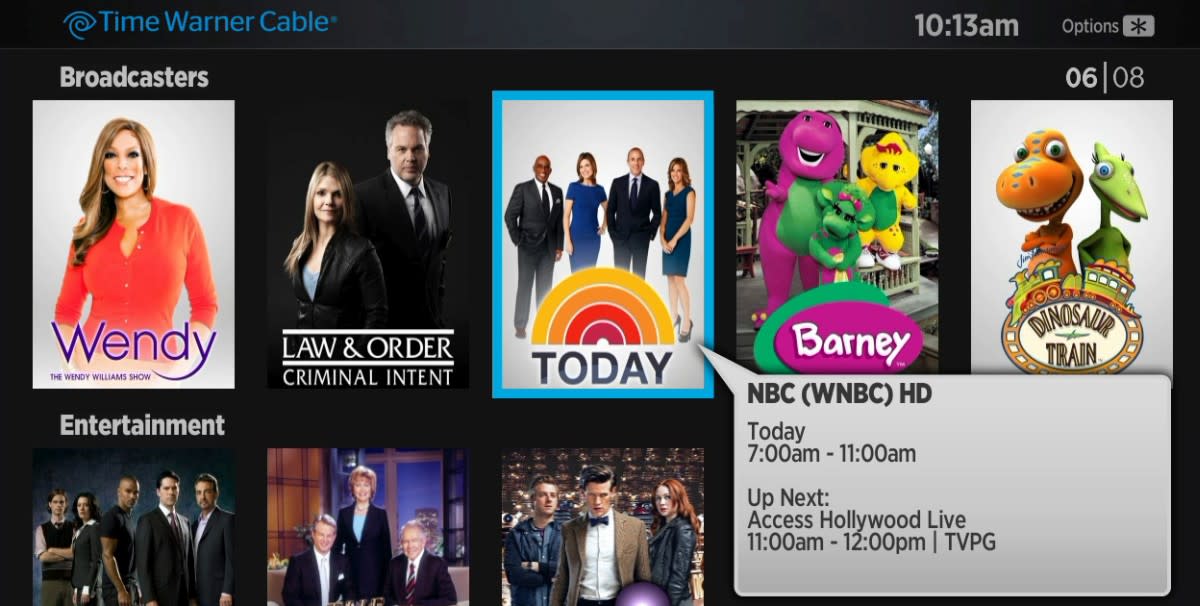 If you want cable TV without the cable box, Time Warner Cable may have something for you soon. Reliable sources tell Engadget that starting Monday, Time Warner Cable will beta test a version of its TWC TV service made available for the company's internet-only customers living in New York City. Similar to Sky's Now TV in the UK it will support a number of hardware platform but the plan is to focus on streaming TV through Roku's set-top boxes, and any participants will get a Roku 3 for free. On top of their internet service, customers can pick up a "Starter" TV package for an extra $10 per month. Another option that adds Showtime and Starz will be available for $20 per month, and for those who want all the usual channels but without a cable box, a Standard option with Showtime and Starz costs $50 per month. Judging by the usual cable packages, Starter customers should have about 20 channels, while the Standard package has more than 70.

Customers who either never sign up for cable TV service or who are ditching cable TV for the internet are definitely an issue for every company in the industry, and TWC's internal documents show this pilot is an attempt to reach just those people. If you already have, or want, their internet service, you can get TV without needing a technician to bring out a box or paying a rental fee, and easily cancel the same way. What you'll miss out on are any DVR features and stuff like StartOver, although video on-demand is available. One thing that's different from the Sky TV setup is that even with the provided Roku 3 box, you can still use any other internet apps (Netflix, Hulu etc.) that it has.

From what it sounds like, this will all be very similar to the TWC TV experience cable TV subscribers already get, just without signing up for "cable." That's been up and running for several years, and that it's going over TWC's own network may prevent some of the glitches seen with others like Sling TV. Customers can stream to up to 4 devices, with and documents show it will support the TWC TV apps currently available for Xbox One/Xbox 360, Android, iOS, Fan TV, Kindle Fire and Samsung's Smart TVs. TWC TV is meant for use inside the subscriber's home, although some video on-demand and live TV is still available over any WiFi connection.

Comcast recently launched its internet service Stream, Cablevision is selling "cord-cutter" internet packages with antennas, Hulu and HBO while Dish Network is behind Sling TV. Even as it's being acquired by Charter, Time Warner cable is rolling out an internet-only product just as the Apple TV hits shelves -- curious given past rumors. So if you're a cord-cutter with access to Time Warner cable's internet, could the ability to use your own box for TV bring you back?

In this article: beta, cable, exclusive, hdpostcross, InternetTv, IPTV, NewYorkCity, NYC, Roku, rumor, streaming, TimeWarnerCable, TWCTV
All products recommended by Engadget are selected by our editorial team, independent of our parent company. Some of our stories include affiliate links. If you buy something through one of these links, we may earn an affiliate commission.