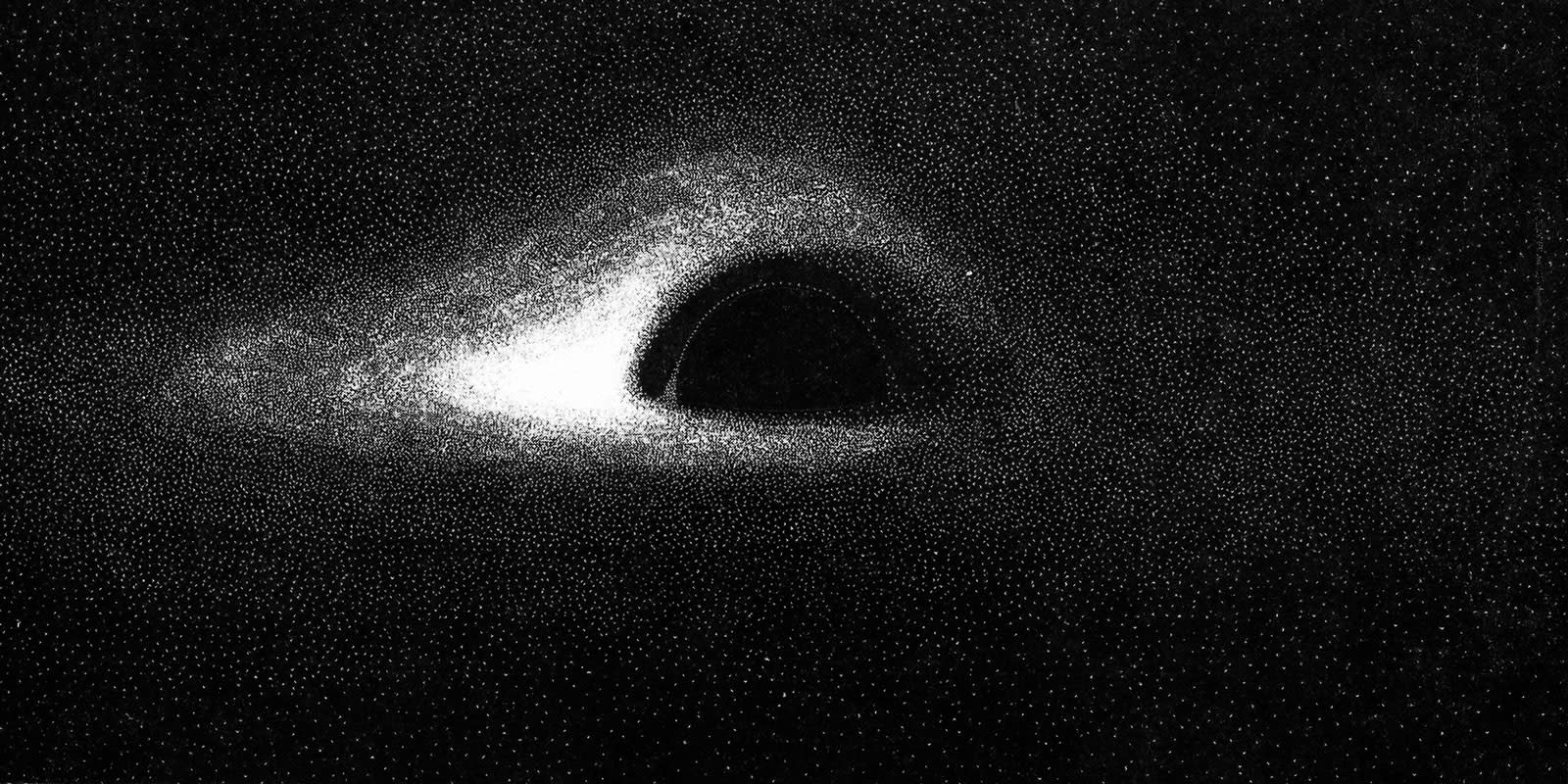 Black holes are so outlandish that the scientists who first thought them up figured they couldn't possibly exist in reality. They form from massive, collapsed stars and are so dense that nothing can escape their gravitational pull, including light. Black holes mess with spacetime so badly that scientists have long wondered: How do these things look, exactly? We may be on the cusp of seeing one thanks to the Event Horizon Telescope, but back in 1979, Jean-Pierre Luminet created the first "image" using nothing but an early computer, lots of math and India ink.

The problem with imaging a black hole is that, by definition, they don't emit light or radiation. Luckily, large black holes are usually next to other stars and suck away their matter, something astronomers can see. "As [gases from stars] fall towards the black hole, it becomes hotter and hotter and begins to emit radiation. This is a good source of light: the accretion rings shine and illuminate the central black hole," writes Luminet in his e-Luminesciences blog.

The distinguishing feature of a black hole is its "event horizon" boundary, the point of no return for matter and light. At its periphery, materials sucked in from adjacent stars form an "accretion disk," famously depicted in Interstellar (below) as two bright, perpendicular disks. That's just an illusion, though -- there's only one disk at the equator, but the light is bent upward by the black hole's extreme gravity (via gravitation lensing). Luminet's image depicts two other important phenomena not seen in Interstellar. One is the fact that the energy and light are stronger near the edge of a black hole and weaker farther out. Another is the Doppler and Einstein effects caused by the accretion disk's rotation, which would make light appear to be brighter on one side, depending on the spin direction. In Luminet's image, the accretion disk spins counter-clockwise, so its light approaches the viewer on the left and recedes on the right, making the left-hand side look brighter.

All that causes the black hole to be much brighter in the center and left, as depicted in Luminet's image, but not on the "Gargantua" black hole created by Interstellar's effects team. "A realistic image must show a strong asymmetry of the disk's brightness, so that one side is far brighter and the other is far dimmer," he says. (Interstellar's black hole expert Kip Thorne was very aware of that, but director Christopher Nolan left it out so as not to confuse the audience.)

Luminet calculated all of that back in 1979 using the IBM 7040 mainframe, an early transistor computer with punch card inputs. The machine generated isolines for his image that were "directly translatable as smooth curves using the drawing software available at the time," he told Engadget in an email.

To create the final image though, he relied on his other passion: art. Using numerical data from the computer, he drew directly on negative image paper with black India ink, placing dots more densely where the simulation showed more light. "Next, I took the negative of my negative to get the positive, the black points becoming white and the white background becoming black."

The result is an image that still holds up and is closer to reality than the CGI done by Interstellar's whiz kids. What's more, subsequent computer simulations created by NASA Goddard and others still show the same defining elements -- a thin "photon ring" at the center, Doppler and Einstin-shifted light and a double accretion disk caused by gravitational lensing. Not bad for someone with just punch cards and India ink.

In this article: AccretionDisk, BlackHole, Doppler, Einstein, eventhorizon, EventHorizonTelescope, Jean-PierreLuminet, science, space, TheBigPicture, thenewbigpicture
All products recommended by Engadget are selected by our editorial team, independent of our parent company. Some of our stories include affiliate links. If you buy something through one of these links, we may earn an affiliate commission.