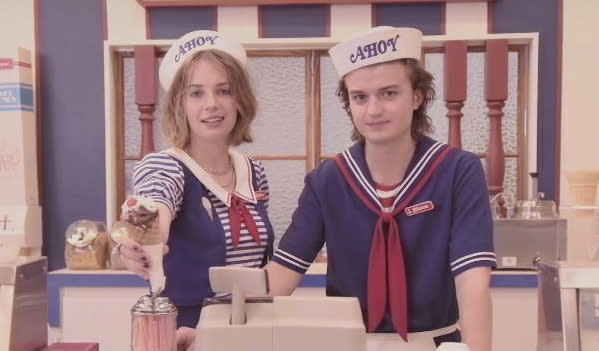 Thanks mainly to online shopping, malls are largely struggling nowadays unless they're willing to change with the times. But in the mid-1980s, they were everywhere, adorned with loud neon signs and welcoming consumers with even louder fashion choices and hairstyles. It seems fitting, then, that a silly ad for such a mall in the town of Hawkins, Indiana, is really the first teaser for the third season of Stranger Things.

Other than the mall opening up in Hawkins and a brief glimpse of Steve and new character Robin (played by Maya Hawke) as ice cream store sales assistants, there's not much to directly tie the teaser to Netflix's hit show. There are a few other nods, such as the announcer claiming the mall is "one of the finest shopping facilities in America... and beyond," which perhaps is a reference to the Upside Down. And, given Stranger Things' frequent use of classic movies as guiding lights, there's an obvious link to Dawn of the Dead, George Romero's mall-set zombie flick.

The YouTube video's description says Starcourt Mall will open in summer 1985, which is the year in which season 3 is set. But the end of the clip says the mall is "coming next summer," which might hint towards the season's release window -- we could have to wait another year for season 3 to arrive. While we await confirmation of when we'll get to see more Stranger Things (which just picked up a heap of Emmy nominations), take 84 seconds out of your day to enjoy this clip, drink in all of the era-appropriate references and either reminisce about or wonder what it was like to enter a gaudy '80s mall.

In this article: av, engadget, entertainment, netflix, strangerthings, streaming
All products recommended by Engadget are selected by our editorial team, independent of our parent company. Some of our stories include affiliate links. If you buy something through one of these links, we may earn an affiliate commission.