How ILMxLAB's 'Vader Immortal' is bringing 'Star Wars' into VR

We chat with the ILMxLAB creatives behind the series.

The first episode of ILMxLAB's Vader Immortal for the Oculus Quest and Rift got everything right: the scale of volcanic Mustafar, the imposing presence of Darth Vader himself, and the joy of swinging a light saber. Where could they go next? How about more force powers and even deeper Star Wars lore cuts. Vader Immortal episode 2 had its surprise launch on Wednesday, the first day of the Oculus Connect 6 conference. Unfortunately, I didn't have my Quest on hand to sit through the entire episode, but based on its training dojo alone, I'm sure it'll please Star Wars fans.

It's clear almost from the start that your character, a roguish smuggler with Force powers, has evolved a bit (much like Luke Skywalker did in The Empire Strikes Back). I held out my hand, hit the Quest's trigger button and my light saber flew right to me. Attacking training drones and deflecting blaster shots felt just as satisfying and before, except now I could throw my lightsaber and have it return on command. And while I didn't get to try this in the dojo, I'm told you'll see other Force powers throughout the episode, like being able to stun and fling enemies across the room. 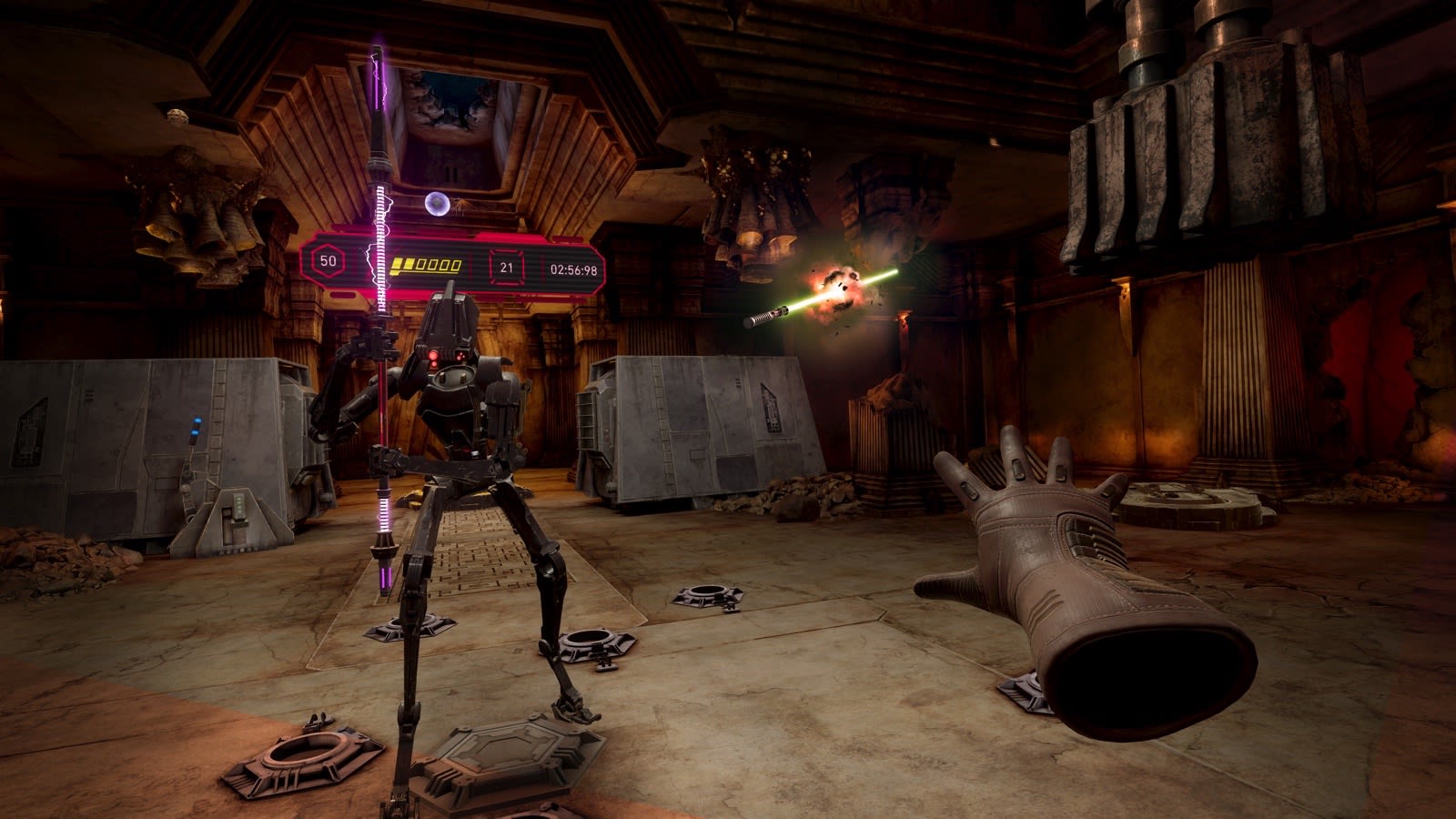 "I think the things that we learned and the things that we iterated on over the course of it, were figuring out how to make the player's hero role really come to life," said Alyssa Finley, ILMxLAB's senior producer of Vader Immortal, in an interview with Engadget. "Episode two especially gives you more powers, you get the force, and more ways to interact with the world. And I think that is all coming from the learnings of episode one...[people get the most enjoyment from being] the hero in their Star Wars adventure."

ILMxLAB tapped screenwriter David Goyer (Blade, Batman Begins) to develop Vader Immortal as a three episode arc. It builds off of Secrets of the Empire, a room-scale VR experience developed by The Void, who also made Ghostbusters: Dimension. According to Ben Snow, the director of Vader Immortal, the plan was always to use the first episode as a way to set the stage, while the second one lets you have a bit more fun.

As Snow explains it, his team has been working on VR Star Wars experiences for a while, starting with one for The Force Awakens. During the development of Secrets of the Empire, though, he realized that the ideal experience would be one where you're a more central part of the story, instead of watching people chat passively. The first episode of Vader Immortal went a long way towards putting you in charge of the narrative: You see the history of your characters exploits in your ship; you hit all the buttons to jump into hyperspace; and of course, your bloodline ends up being special enough for Vader to keep you around. 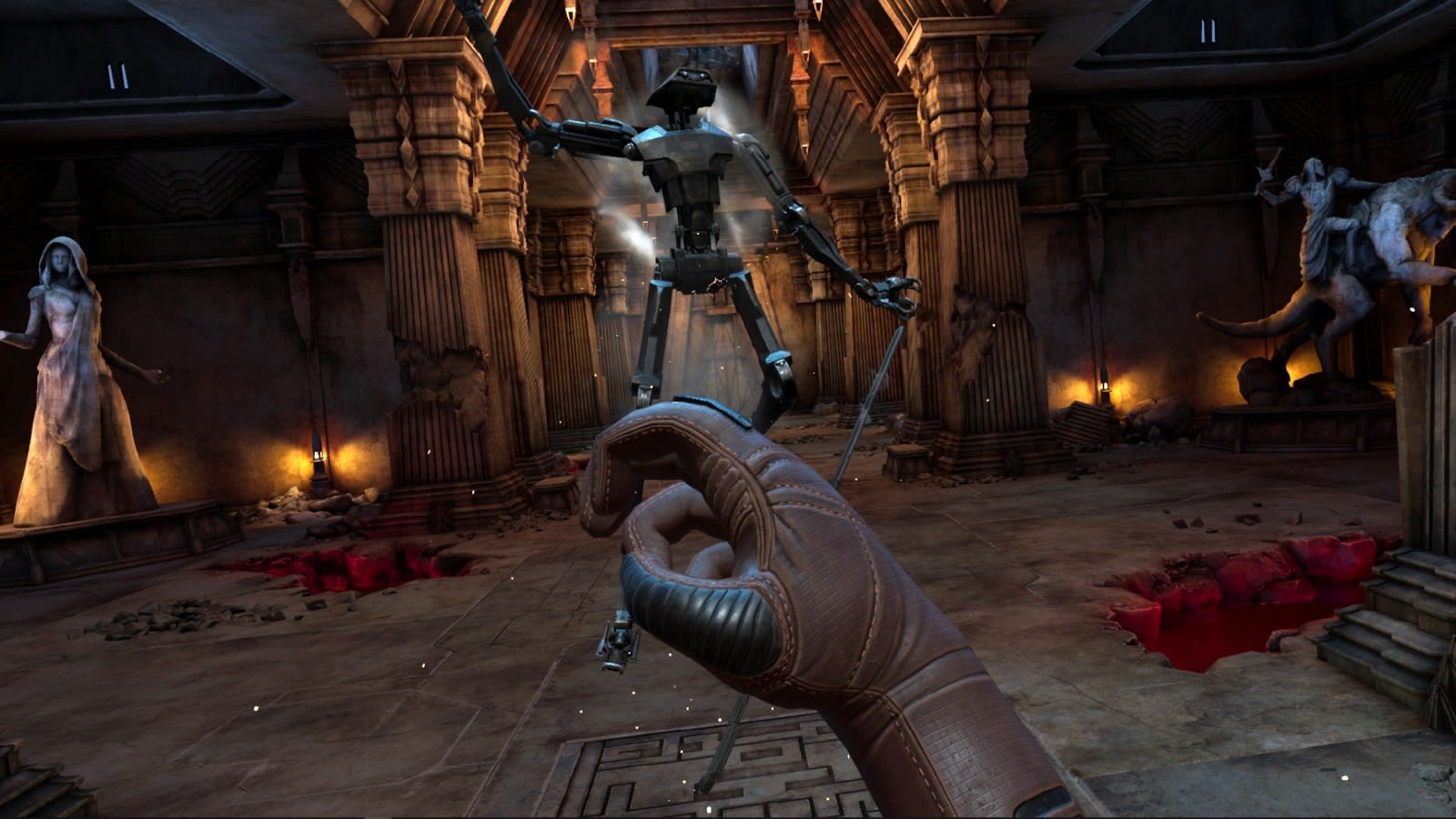 "We've helped a lot of studios and IP owners make experiences that were a good but fairly slight, and essentially functionally demos or adjacent to other experiences or movie," said Colum Slevin, head of media at Oculus's AR/VR Experiences Group. "And then for the ILMxLAB team to show up and say no, we want to make a canonical, integral three part narrative that exists in the universe but stands on its own, we were sold."

It also helps that the ILMxLAB team has the full support of the entire Star Wars franchise, Finley says. The folks at Skywalker Sound can help them craft an experience that sounds and feels just like the movies. And most importantly, the LucasFilm Story Group helps them weave their storyline into the series' canon. "Those guys have giant throbbing brains filled with all of the story of the world," Finley said.

That's how Vader Immortal gets into truly deep cut Star Wars territory. The first episode taps into moments from the prequel films, and you'll end up encountering a mysterious artifact called the "Protosaber," an early medieval-looking lightsaber, this time around. Of course, all of those geeky beats have to be balanced with telling a solid story.

"The Story Group particularly is against fan service for it's own sake," Snow said. "And I think we are too... I think it's better for us as artists in xLAB to be creating this stuff that's our story and, not just, this is sort of an advertisement for something else. That's not what we want to do."

While Finley and Snow couldn't say much about what ILMxLAB is doing next, it's clear that the company is learning from the success of Vader Immortal. Perhaps next time, we'll have a full season's worth of Star Wars VR to dive into.