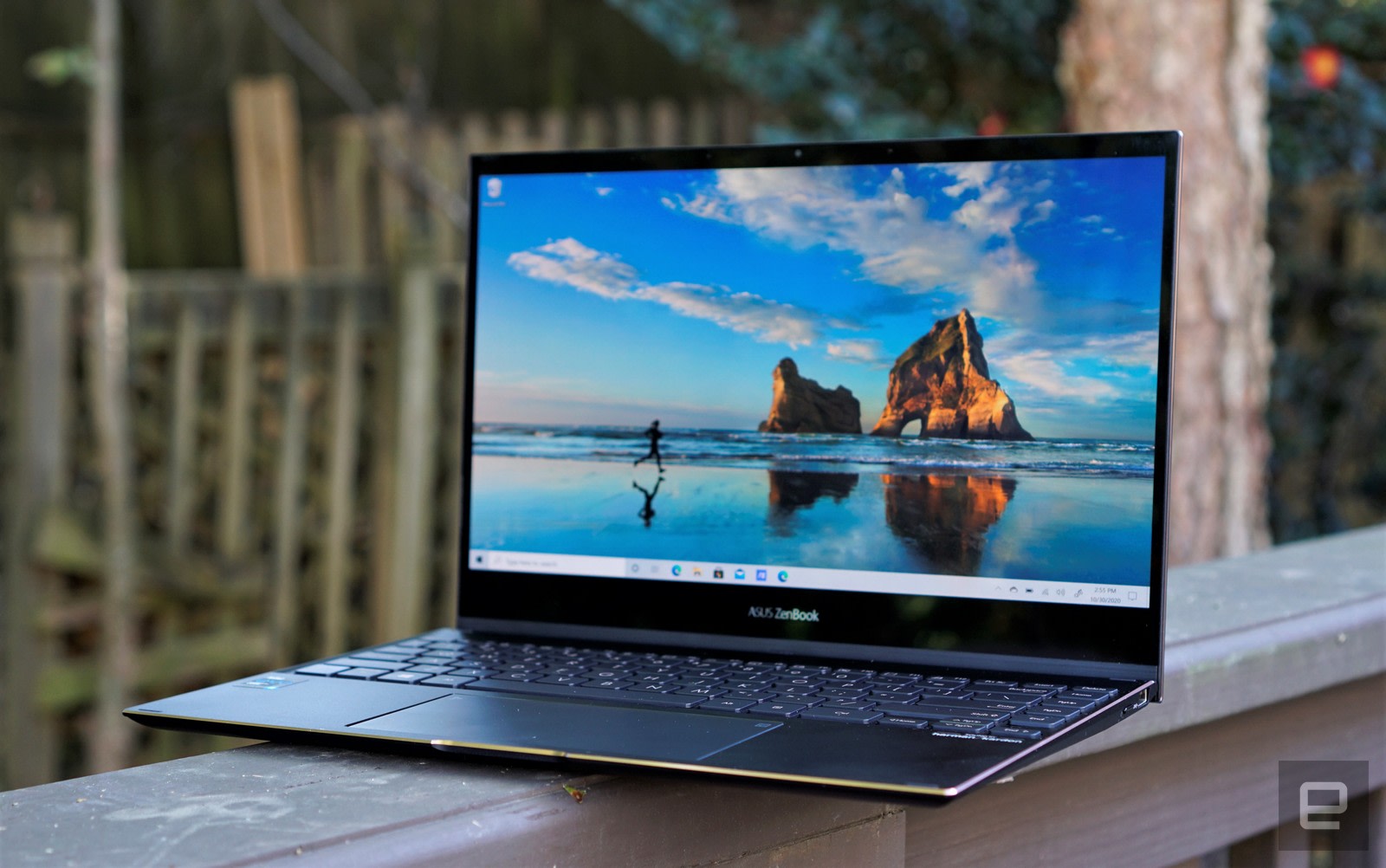 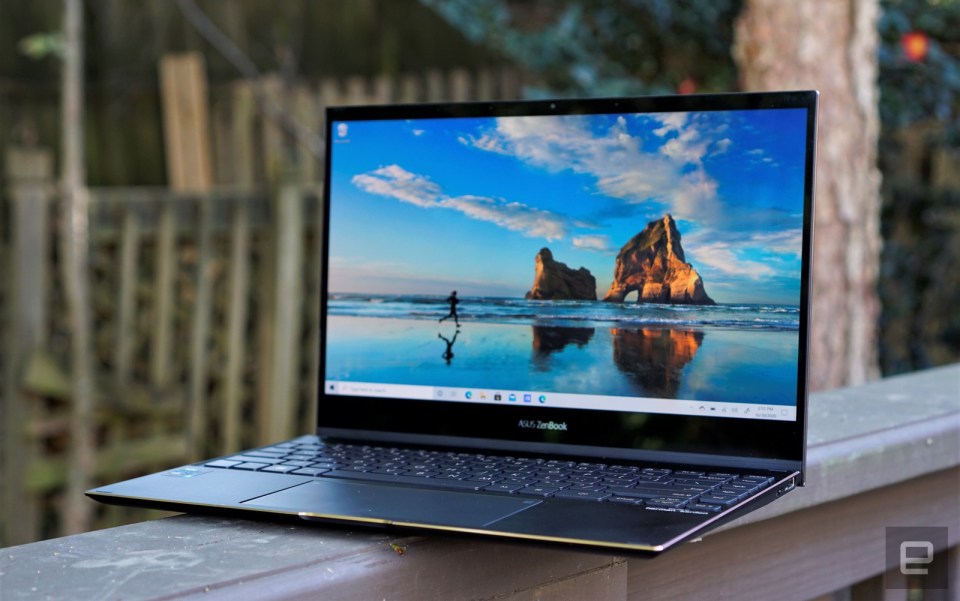 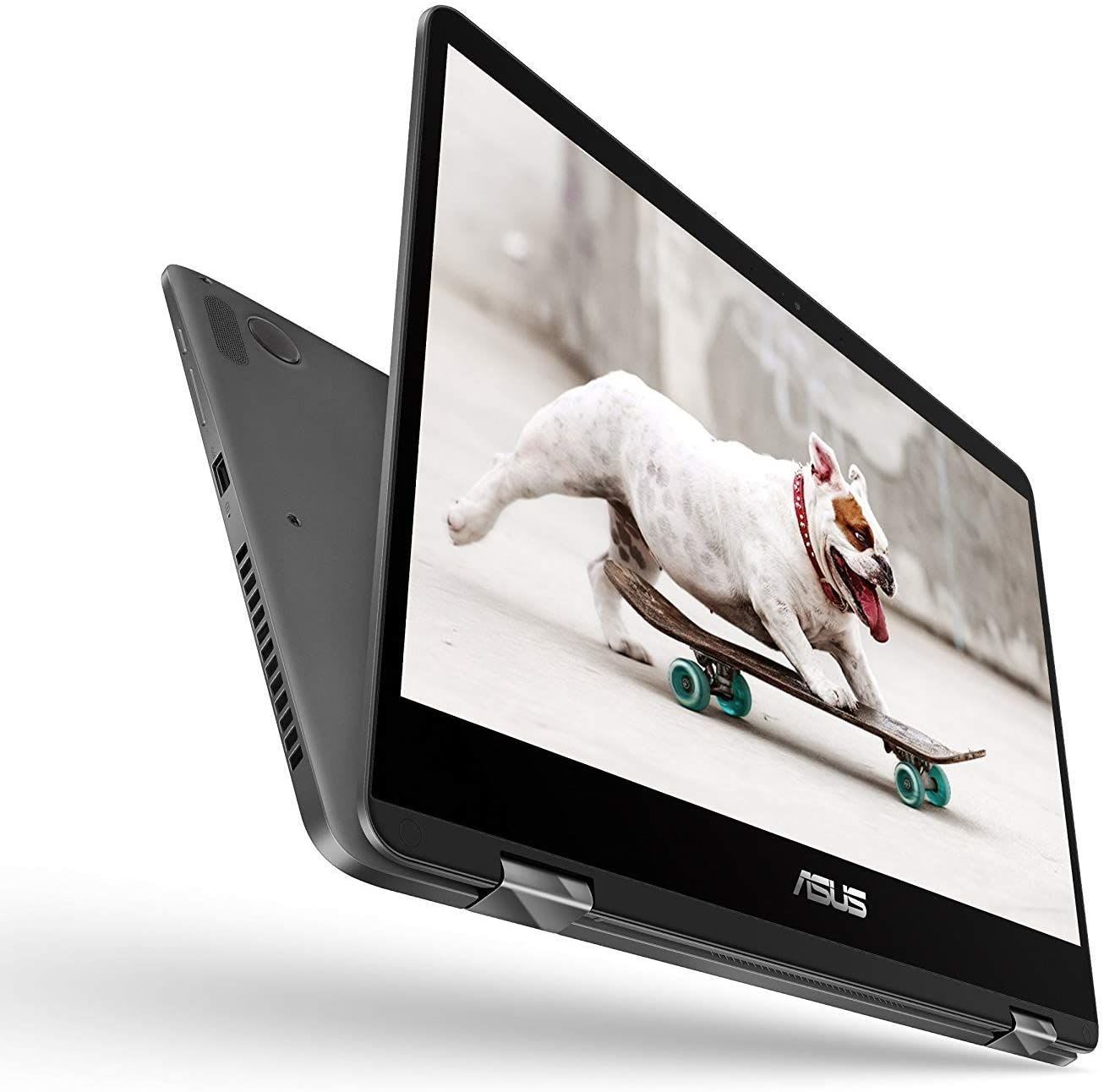 The ZenBook Flip S is close to being the ideal ultraportable. As one of the first Intel Evo devices -- the company's branding for devices with 11th generation “Tiger Lake” CPUs that meet a strict set of standards -- ASUS had to prove it could deliver a premium experience. And for the most part, the company succeeds: The ZenBook Flip S has a sleek and thin convertible design; a gorgeous 4K OLED screen; and some decent horsepower, thanks to Intel's Xe integrated graphics. It has almost everything we'd want in a next-generation laptop -- though, strangely , that kitchen sink approach couldn't fit in a headphone jack. 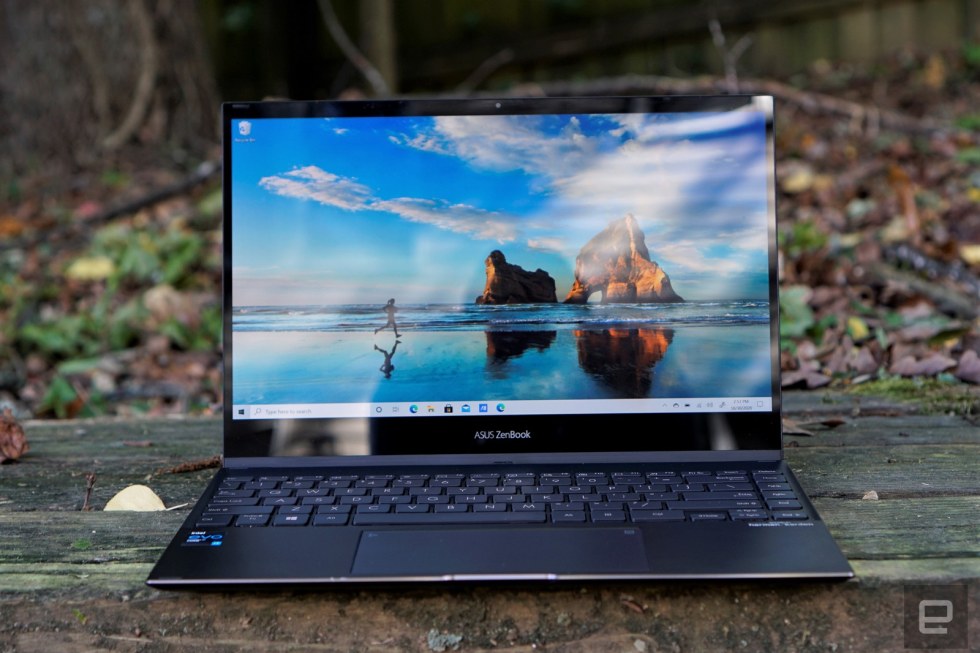 In many ways, the Flip S is the logical evolution of ASUS's premium notebook designs. It has a sturdy aluminum case with gold accented edges, which give off an air of sophistication. It doesn't look gaudy the way earlier ZenBooks did, though the case remains a fingerprint magnet. It's also impressively thin, measuring 13.9 millimeters, and relatively light at 2.86 pounds. That puts in the same ballpark as this year's  XPS 13, which clocks in at 14.8mm thick and 2.8 pounds.

The ZenBook Flip S is a solid premium convertible laptop, with fast 11th-gen Intel hardware and a gorgeous 4K OLED screen. It’s a standout as one of the first Intel Evo machines, but be prepared to live with slightly thicker bezels than the competition, and the lack of a headphone jack.

Be the first to review the ZenBook Flip S?
Your ratings help us make the buyer’s guide better for everyone.
Write a review

There's no flex to the Flip S, not even when you're rotating the screen into tent or tablet mode. In the latter, though, the two halves of the Flip S don't sit completely flat together, so you'll have to live with a bit of a gap. That's not a deal breaker for me, but it's a curious issue in a machine that feels so polished.

The true star of the show is the ZenBook Flip S's 13.3-inch 4K OLED screen, which makes just about everything look fantastic. The inky blacks and saturated colors are particularly well-suited to binge-watching Netflix and YouTube clips. I'm looking forward to the day when we see OLED screens beyond a 60Hz refresh rate, though. A 120Hz LCD like the Zephryus G14's offers smoother scrolling for web browsing and office documents, at the cost of battery life.

As great as the OLED display looks, though, the ZenBook Flip S could have used thinner bezels, like ASUS's ZenBook Duo. The sides of the screen are far thicker than competing ultraportables like the XPS 13, and the large bottom border is an unfortunate eyesore. We know ASUS can make thinner bezels work -- I'd wager the company was more limited since it was trying to fit an OLED into a thin convertible notebook.

Maybe ASUS was just in a rush to get this thing out before other PC makers. That could explain why there’s only one configuration available: a Core i7-1165G7 Tiger Lake CPU with Intel Xe graphics, 16GB of RAM and 1 TB NVMe SSD. I'm not complaining too much, since this is the sort of spec list I recommend to new notebook buyers, but you're out of luck if you were hoping to save money by configuring it with less RAM or storage.

Thanks to that beefy hardware, the ZenBook Flip S handled my daily workflow like a champ. I juggled dozens of tabs across multiple browsers; worked on documents on Word and Evernote; edited images; streamed Netflix and uploaded large files all at once, without any noticeable slowdown. As for benchmarks, it scored 500 more points in PCMark 10 compared to the XPS 13 with a 10th-gen Intel CPU, though it ranked lower than that machine in Geekbench 5.

With its Xe graphics, the Flip S scored four times higher than the XPS 13 in the Geekbench Compute test, which measures OpenCL performance for workloads like video rendering. That GPU also gave it enough power for light gaming: Minecraft ran at a steady 60FPS in 1080p, while Overwatch reached 50FPS in 720 with low quality graphics, which is similar to what we saw with last year's Iris Plus graphics. This isn't a gaming machine -- but at least Intel Xe's hardware can handle some less demanding titles. It's just a shame it can't quite match the faster performance we saw on Intel's 11th-gen CPU reference machine.

While its performance is relatively solid, the ZenBook Flip S's keyboard is a bit more flaky. It reaches the edges of the laptop, like the XPS 13, which gives it a wide layout. And its keys have a healthy 1.4 millimeters of travel. But even so, everything feels a bit too cramped together, which made it more difficult to type accurately. I got used to it within a few hours, though, and eventually made it back to my typical 85 word-per-minute score on TypingTest.com's Benchmark. The glass trackpad, meanwhile, is large, smooth and accurate. You can also turn it into a number pad by hitting a button on the corner, something I didn’t have much use for, but it may be helpful for some.

As I mentioned above, one major downside with the ZenBook Flip S is that it doesn't have a headphone jack. Funny enough, it finds room for a full-sized HDMI connection, alongside two USB-C ports and a USB-Type A. ASUS reps tell us that the headphone jack had to go to fit in Thunderbolt 4 USB-C connections, faster LPDDR4 RAM and the edge-to-edge keyboard. At least there’s a USB-C dongle with a 3.5mm port in the box, so you don't have to give up on your older headphones entirely.

Another thing you'll have to live without is the insane battery life we've seen from other recent ultraportables. The ZenBook Flip S clocked 10 hours and 25 minutes in our battery benchmark, which certainly sounds respectable, but it lags behind the XPS 13 by five and a half hours. That’s particularly strange since it’s heavier than Dell’s premiere laptop.

At $1,499, the ZenBook Flip S has a significantly higher starting price than other 13-inch premium notebooks, but it justifies that with faster internals than cheaper models. And it's a bargain once you start speccing up other notebooks. A comparable XPS 13 2-in-1, for example, costs $1,949 without OLED and only half the storage (512GB) that ASUS offers. HP's Spectre x360 typically costs $1,600 with a similar configuration (though that's on sale for $1,350 as HP clears out its older 10th-gen Intel stock). If you need a machine right away, you'll probably have to go for a competitor though, as ASUS isn't saying when the Flip S will be available for sale.

My biggest takeaway from spending weeks with ASUS's ZenBook Flip S: It's going to be an exciting year for ultraportables. Thanks to Intel's 11th gen CPUs and Xe graphics, they'll be more powerful than ever before. And they've also got some competition with AMD's Ryzen 9 mobile chips. On its own merits, the Flip S is a solid ultraportable, especially with its excellent hardware and OLED screen. But it also feels like ASUS moved quickly to be one of the first PC makers with a Tiger Lake machine, so if you're aiming to get one, be prepared to live with thicker screen bezels and a headphone jack dongle.

In this article: ASUS, convertibles, ultraportables, 11th gen, Tiger Lake, ZenBook Flip S, Intel Xe, Review, news, gear
All products recommended by Engadget are selected by our editorial team, independent of our parent company. Some of our stories include affiliate links. If you buy something through one of these links, we may earn an affiliate commission.