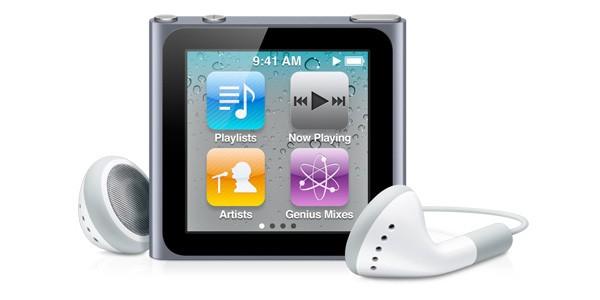 Apple has just revealed its 6th generation iPod nano, which has been outfitted with just about the boldest redesign the portable media player has experienced yet. Gone is the clickwheel, to be replaced with a touchscreen interface and a shuffle-esque square form factor. It's now 46 percent smaller and 42 percent lighter. Hard volume buttons on the side and a clip on the back provide the minimal hardware accouterments to that multitouch touchscreen, while the inside provides enough juice for 24 hours of audio playback. Seven total color variants will be up for grabs, including a Product RED option, with prices set at $149 for 8GB of storage or $179 for 16GB and pre-orders being taken today.

P.S. -- If you were looking for that awesome camera the nano used to have, stop. It ain't there anymore. We've also noted that there's no video playback to be found anymore, either.

SAN FRANCISCO-September 1, 2010-Apple® today unveiled a completely redesigned iPod nano® featuring Apple's Multi-Touch™ interface that lets users navigate their music collection by simply tapping or swiping a finger on the display. Nearly half the size and weight of the previous generation, the new iPod nano features a polished aluminum and glass enclosure with a built-in clip, making it instantly wearable. The new iPod nano features Genius Mixes, the ability to create and edit playlists, a built-in FM radio with live pause and up to 24 hours of music playback on a single battery charge.*

"This is the biggest reinvention of the iPod nano since its debut in 2005, and we think users are going to love it," said Steve Jobs, Apple's CEO. "Replacing the click wheel with our Multi-Touch interface has enabled us to shrink the iPod nano into an amazingly small design that is instantly wearable with its built-in clip."

The new iPod nano with Apple's Multi-Touch interface allows users to access their songs, artists, albums and playlists with a tap or swipe of their finger on the display. Holding down a finger returns the user to the Home screen, and users can easily use two fingers to rotate the screen if it is clipped onto their clothing upside down. Users can also customize their Home screen by simply dragging icons from other screens onto the Home screen.

iPod nano also features Shake® to Shuffle™, giving music lovers the ability to shake their iPod nano to shuffle to a new song in their music library. With its built-in FM radio, iPod nano lets you listen to your favorite radio stations, and live pause lets you pause and resume playing your favorite FM radio shows without missing a beat.

With an amazing new design that is nearly half the size and weight of its predecessor, the new ultra-portable iPod nano is a natural workout companion. Clip iPod nano onto your workout clothing, touch your music and start your workout. iPod nano features a built-in pedometer that makes it easy to track your steps and also supports Nike + iPod®, giving users the ability to track runs and workouts.

iPod is the world's most popular family of digital music players with over a quarter billion sold. Apple's new holiday lineup includes a brand new iPod shuffle® for just $49; the remarkable new iPod nano with Multi-Touch starting at $149; the incredible new iPod touch® with Retina™ display, Apple's A4 chip, FaceTime®, HD video recording and Game Center starting at just $229; and iPod classic® in a 160GB model for $249.

Pricing & Availability
The new iPod nano will be available next week for a suggested price of $149 (US) for the 8GB model and $179 (US) for the 16GB model. Both models are available in silver, graphite, blue, green, orange and pink through the Apple Store® (www.apple.com), Apple's retail stores and Apple Authorized Resellers. The 8GB and 16GB iPod nano (PRODUCT) RED is available through the Apple Store (www.apple.com) and Apple's retail stores. iPod nano requires a Mac® with a USB 2.0 port, Mac OS® X v10.5.8 or later and iTunes® 10 or later; or a Windows PC with a USB 2.0 port and Windows Vista or Windows XP Home or Professional (Service Pack 3) or later and iTunes 10 or later.