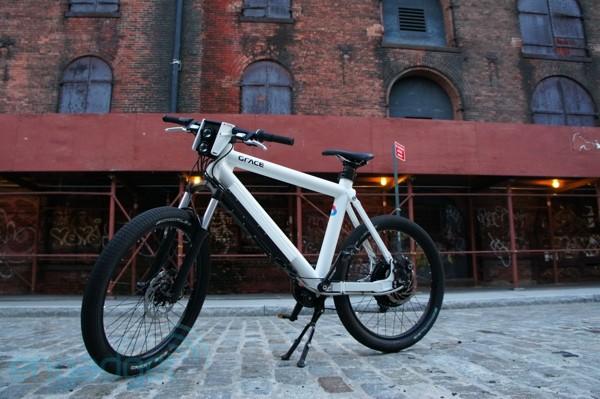 There comes a time in nearly every person's life when they need to get up, get out the door and get to work. Some drive, some walk, some take one form of public transportation or another -- but a noble few do something different. Those people ride their bikes, holding on to the passion gained in a childhood of racing around the neighborhood on Huffys and Schwinns, skinning knees or elbows when the latest attempt at a sweet jump turned a little sour.

Sure, those people may say they're saving money or the environment by riding a bike into work, but we all know they do it for fun. As is the case with most wheeled pursuits, the fun factor increases with the speed, and with that idea we welcome to you to the Grace One. It's a German electric bike that offers more high-tech trappings than your average economy car -- a good thing, because it costs nearly as much as one. What does this $6,000 bike offer? Speed. Sweet, effortless speed (up to 25MPH without you burning a single calorie), and we recently had the chance to put one through its paces. Read on to see how we fared. The Grace One will shred your commute in record time but takes away some of the achievement found in riding to work.

Note: Since this video was filmed Grace prices have dropped and currency values have made the One City cost closer to $6,000 than $10,000.
From a distance the Grace One looks like a crude, heavy, overbuilt mountain bike that rolled off the assembly line in 1983. The frame is hugely thick, the top tube is nearly parallel to the ground and is way up there, and the construction just seems far more beefy than is required.

This bike, though, is meant for the road. Get a little closer and you'll notice the minimal tread on the tires and, while there is suspension up on the front forks, the default stiffness of them is punishing on anything short of smooth roads. That bit of damping isn't there for comfort or to ease the landings from those jumps -- its to help keep the front tire on the ground under hard braking.

And given how fast you can go on this thing without breaking a sweat you'll frequently be calling on those Magura disc brakes, mounted front and rear. They're more than powerful enough to lock up their respective tires on dry asphalt, so go gentle on those stubby aluminum levers mounted on either end of the straight but nicely tapered handlebars.

On the left grip is a twist-shifter, offering a slightly underwhelming nine speeds to the rider. On the right grip is what sets this apart: a twist throttle. With just a little twist of the wrist you can unleash this bike's secret weapon: a 1.3kW motor mounted inside the rear wheel.

That motor will spin you up to 25MPH, but when you pedal you spin the wheel /and/ the motor, so you can actually add to the equation. It's powered by 15 pounds (6.6kg) of cells, inserted in that top tube on the frame, which goes a long way to explaining why it's as chunky as it is. That also explains why the bike is as heavy as it is -- about 80 pounds (34.6kg), and that's despite aluminum construction and a series of top-shelf, lightweight parts.

The other big clue that this isn't your average bike is the dash cluster mounted up on the bars. On a simple, two-line LCD readout you get information on battery status, range covered and a speedometer. What don't you get? A simple battery readout -- there's no easy-to-read fuel gauge.

There is, however, a horn, and both high- and low-beam headlights up front. Both are surprisingly effective.

Throwing a leg over the Grace One is a task best performed by folks with long legs. The seat, lowered as far as it would go, was still an uncomfortable stretch for a six-foot-tall reviewer, and standing flat-footed required tipping the bike to one side and letting the top tube go places only particularly intimate pieces of clothing belong.

On a normal bike this would make moving away from a dead stop something of a clumsy affair -- a hop and a hard pump required to get away with a wobbly start. Here, though, it's easy: just twist the right grip. Regardless of what gear you're in the motor will pull you away from a dead stop and nearly instantly have you going fast enough to stabilize the bike. Training wheels were never more unnecessary.

The thing doesn't exactly accelerate like a sportsbike -- no worries about dislocated shoulders from the torque -- but it gets up to speed quickly. We never tired of lining up at a stoplight next to a taxi cab and comprehensively leaving every tired Crown Vic in our dust when the light turned green. Sure, a few moments later the yellow junker would go rattling by, but anyone who's ever ridden in a NYC cab knows that their drivers are not light on the throttle when the light goes green. That kind of acceleration from a bicycle is... unusual.

The bike, with its fat tires and solid construction, is very easy to ride. It may have top speed on its side but it's hardly a razor-edged racer with mustache handlebars and tires so skinny they seem liable to cut the tarmac in two. With the seat all the way down the riding position is reasonably comfortable, a geometry that feels like a casual bike and doesn't put your rear too high or too much weight on the bars. But, if that's the kind of posture you're looking for, there's certainly room to raise the slender seat far higher.

And what about that speed? With failing batteries after a day of hard riding (we covered about 22 miles on a charge) we topped out at 42MPH on flat ground. With some taller gearing and a bit of help from an incline we're sure we could have done better -- but ultimate speed isn't really the story here. It's effortless speed that's the key. You can haul posterior on a traditional bike and go as fast as you dare and your legs will carry you, but here you can do it with ease.

Twist the throttle and within a moment you'll be keeping pace with traffic on a busy street. Pedal a little and you'll be passing cars with abandon. It's easy, real easy, which is both good and bad. It's good because it leaves you less stressed, your mind a little more free to look out for suicidal iPod-wearing pedestrians and for parallel parkers who can't wait to open a door in your path. Not having to worry about pedaling means you can focus on staying alive.

But, it completely sucks the feeling of accomplishment out of the overall experience. When you ride a traditional bike in to work you can take pride in knowing that you schlepped yourself up and over every hill in your path. It's okay that you're sweaty, winded and have helmet hair -- you've earned it. Here, not so much. Here you're mostly a passenger. The bike is plenty fast on its own; the Grace One only needs you to twist the throttle and keep it upright and pointed in the right direction. That's no more difficult than (gasp) driving a car.

And, it must be said, this is a bike for people with an awful lot of disposable income. Sadly, that's not us -- but we wish that it were.
In this article: bicycle, bike, electric bicycle, ElectricBicycle, engadget show, EngadgetShow, grace, grace one, GraceOne, review, video
All products recommended by Engadget are selected by our editorial team, independent of our parent company. Some of our stories include affiliate links. If you buy something through one of these links, we may earn an affiliate commission.
Share
Tweet
Share