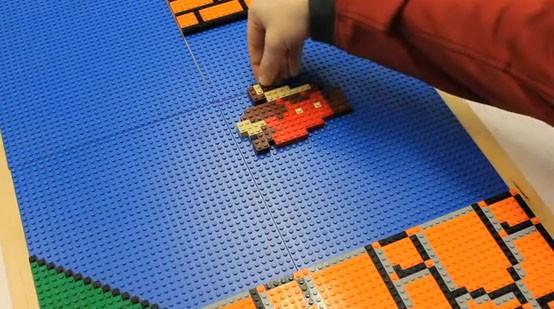 What's cooler than Super Mario Bros. and Legos? Why, Super Mario Bros. with Legos, of course. That's the premise behind Lego artist Zachary Pollock's "Epic Mario" project, which aims to recreate the entire Level 1-1 of Super Mario Bros. using one Lego block at a time. At one brick per pixel, Pollock's project is expected to come in at around six feet tall and 90 feet wide once completed. He also estimates that he's going to need "just over 780,000 Lego studs" and some significant coinage -- to the tune of $26,400. Unfortunately, money just doesn't come from punching bricks in real life, and Pollock is turning to Kickstarter to get all the extra coin he needs for the project. This isn't the first time Legos were used to re-imagine a beloved classic -- heck, it isn't even the first Mario level to get the blocky treatment. That doesn't make the concept any less amusing, however, and Pollock promises to hold brick-building parties and take his project on the road to various conventions if it gets funded. Check out the potential project in all its blocky glory in the video after the break, as well as an update on our last Insert Coin project, the Berlin Boombox.


Previous project update: The Berlin Boombox has passed the $12,000 mark toward its $14,000 goal with 9 days left to go. The device is a portable cardboard boombox that's compatible with any source that can be connected via a 3.5mm headphone jack.