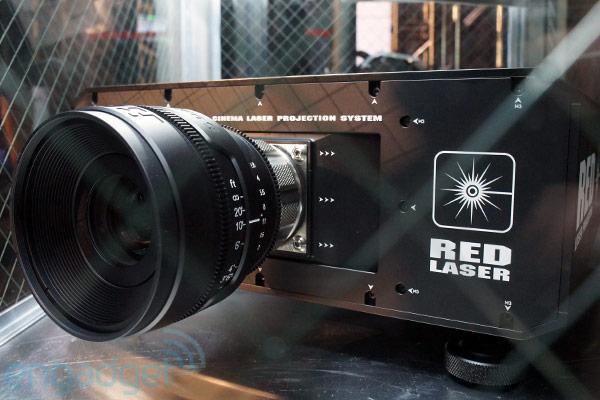 There's no better way to control the visual experience from shoot to show than to create the camera and the projector. That's likely the thinking behind the REDray, the 4K laser cinema projector making an appearance at the company's NAB booth today. The device supports 2D and passive 3D (up to 120fps in 3D mode), with 4K projection for each eye and has a rated laser life of over 25,000 hours. While the device itself is likely to be hidden behind glass in an elevated projector room, the REDray has the same industrial look and feel of its Scarlet and Epic capturing counterparts, with a solid matte metal construction, heavy duty bolts and dedicated access panels for the lens filter, the laser phase adjustment oscillator and the angular refraction aberration indexer. There's also a T1.8 50mm lens mounted up front, sufficiently completing the beautifully monstrous package. Also on display was the tablet-controlled REDray Player, which includes four HDMI 1.4 video outputs with 7.1-channel audio output, the ability to move 4K video to the internal hard drive and an SD reader for ingesting content. You'll also find dual gigabit Ethernet ports, along with USB and eSATA connectors.

The projector experience is much less about the hardware than it is the projections themselves, which certainly did a justice here -- especially considering the imaging device's mid-development status. During a screening of the 3D short Loom, which was shot with the RED Epic, images looked fantastic with accurate color and excellent dynamic range, allowing us to see every detail in a contrasty dark scene, where we were able to make out a very dimly lit female actress. The projection was incredibly sharp on the 24-inch foot screen, despite the film being displayed with 2K for each eye, rather than the maximum 4K. There will be two versions of the REDray projector, including a home theater flavor that supports screens up to 15 feet in size that'll ring in at under $10,000, and a professional model with support for larger venues. RED CEO Jim Jannard confirmed that the home-bound version will ship sometime this year, though he was unable to provide a more precise ship date. We weren't permitted to record video during the screening -- which is for the best, considering that there's really no way to do this thing justice -- but you can still flip through the gallery below for an early look at REDray. In this article: 3d, 4K, 4k 3d, 4k3d, camera, cinema, Epic, film, filmography, hands-on, hdmi, hdpostcross, laser, laser projector, LaserProjector, NAB, NAB 2012, Nab2012, passive 3d, Passive3d, projector, RED, red redray, redlaser, REDray, RedRedray, scarlet, video
All products recommended by Engadget are selected by our editorial team, independent of our parent company. Some of our stories include affiliate links. If you buy something through one of these links, we may earn an affiliate commission.
Share
Tweet
Share