If you think Apple is getting a little predictable with its yearly device refreshes, you probably haven't been charting the progress of its iPod nano. While most products in the Apple line receive an update every 12 months or so, few have experienced the kind of annual reinvention of the nano. It's a rare example of the company drastically re-thinking a product with such regularity -- or of simply not really knowing what to make of it.

Depending on how you look at it, this new seventh-generation iPod nano is either the latest, most optimal design of the long-running series, or it's Apple's latest shot in the dark. Even the cynics will have to agree this is a pretty good shot, thinner than ever and packing more functionality than in the past -- including Bluetooth 4.0. It sure doesn't make much of a wristwatch, but is the latest littlest iPod worth the $149 price of admission to its 16GB capacity? Read on to find out. 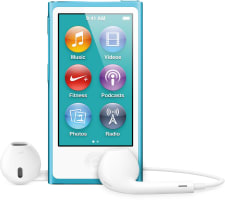 It's a tiny little thing, this new nano. No, it isn't the smallest in terms of volume -- that honorific resides with the decidedly square sixth generation, which measured 37.5 x 41 x 8.8mm. This new, clipless model is far thinner, just 5.4mm, but it's also taller (76.5mm) and a bit wider (39.6mm), creating a device that is overall slightly larger. But, that's like saying Gerard Butler is a slightly hunkier dude than Hugh Jackman. Both dudes are pretty hunky.

This new nano is properly tiny. Its weight, 31 grams, is less than half that of the new iPod touch and about the same as 10 sticks of Juicy Fruit.

Indeed, this new nano is properly tiny. Its weight, 31 grams, is less than half that of the new iPod touch and about the same as 10 sticks of Juicy Fruit. It weighs less than the batteries in many modern smartphones -- those that still have removable batteries, anyway. Put it in your pocket, even the tiny fifth pocket that Steve Jobs famously pulled the original nano from back in 2006, and you absolutely won't be able to tell it's there.

The reason for this change in dimensions is the move away from the square, 240 x 240 resolution LCD found in the last-gen nano. That's replaced by a 2.5-inch, 16:9 aspect ratio, multi-touch LCD that clocks in at 240 x 432. It's actually a slight step down in terms of pixel density, but the extra space is more than worth it, as now this can make for a passable video player. In a pinch.

Still, even ignoring its size, this panel won't dazzle you like the one on the new iPod touch does. It's bright and clear and reasonably good-looking, but viewing angles are not this thing's forte. Tilt the screen downward and the contrast quickly plummets, and the color balance appears pretty sickly when gazing onward from any other direction.

Situated beneath that display is a tiny home button, a first on the nano. (Previous iPods had click-wheels or no such buttons at all.) That makes one of five buttons here -- yes, five. There's a slender power button up on the top and, on the upper-left, a three-way volume rocker like those found on many BlackBerry handsets. With this you can adjust volume and, by pressing in the middle, play/pause music or engage in any of the Morse code-like commands for shuffling or skipping tracks.

This rocker sits flush with the side of the device, the indentation in the middle serving as the only thing that sets it apart from the left extent. Still, it's easy to find, but given the size of this thing we think you'll probably want to rely on the inline remote on a pair of suitably endowed headphones. Sadly, the EarPods included with the device are lacking in that regard.

On the bottom are the three means of connectivity -- two ports and a tiny plastic window through which this thing's Bluetooth 4.0 antenna talks. On the left is the 3.5mm headphone jack and on the right, the Lightning connector. As on the iPhone 5 and the new iPod touch, the Lightning connector is a huge upgrade in terms of usability and size -- far easier to connect and, of course, much smaller. But, that comes at the expense of adaptor-free compatibility with the zillions of iPod docks out there today.

The design language of the device is simple, clean and, frankly, not too far off from the previous nano.

The design language of the device is simple, clean and, frankly, not too far off from the previous nano. The anodized aluminum chassis curves around to cradle the LCD on the left and right, but it's flat on the top and bottom, with edges exhibiting the subtle chamfering that appears to be all the rage these days. It has a soft, polished finish to it that we think will hold up reasonably well to scratches. It will, at least, be far more scratch-resistant than the previous mirrored, stainless steel backs.

Overall, the new nano isn't quite the visually arresting device that the latest iPod touch is, but that's at least in part because it's so much smaller -- it's harder to appreciate the design features. Look closely, though, and the attention to detail shines through. This is a great-looking and great-feeling device.

Users of the previous-gen iPod nano will feel right at home here, for the most part. Not an awful lot has changed in the interface or functionality, though things are a bit more streamlined than before. It's still the same basic iOS-like UI, but again we're not talking actual iOS. There are nine icons this time, spread across two pages -- with just three icons taking up the second. Thankfully you can re-arrange them and relegate your least-used functions to the depths of the second page.

Music and playlist controls are all contained beneath the single Music icon now, which brings up the familiar iPod interface for browsing tracks by artist, album or playlist. There are the same loop and shuffle playback options as before. Making a triumphant return after a few years off is the video player, which makes the best use of the limited screen real estate to play back footage in 16:9 Tinyvision.

Nike+ functionality is still here, made even better in this iteration by having everything built into the device. You no longer need to clip on a receiver or put an accelerometer on your shoe to track your walks or runs, and you can even connect Bluetooth heart rate monitors wirelessly. That makes this an even better workout companion than before -- though the lack of the integrated clip will be seen as a slight step backward by those whose running shorts lack pockets. (Surely some intrepid case maker will fix that problem in short order.)

Photo viewing is still possible, made better with pinch-zooming this time around. And, thanks to the accelerometer, images will auto-rotate as you go from portrait to landscape. Radio playback is largely unchanged, including song tagging and the Live Radio pausing, which enables up to 15 minutes of time shifting. There are lots of clock faces, made somewhat less necessary thanks to this thing's shape being unsuitable for wrist wearing, but we have no doubt someone will prove us wrong on that front. Finally, pop in a headset with a microphone and you'll get the Voice Memos icon, which allows the recording of little reminders.

But, since the set of EarPods included with the nano lack inline controls and the inline microphone, if you want to make such recordings you'll have to BYO ear buds.

We stacked the new nano up against the new iPod touch to see if you're giving up anything in the audio quality realm as compared to something bigger -- well, slightly bigger, anyway. We tested with Apple's EarPods, Klipsch S4i buds and some Sennheiser HD555 cans and could find no discernible difference between the players when listening to the same tracks. So, while we wouldn't recommend powering anything with an overly high impedance, the new nano is more than capable of driving your average 'buds.

The radical change in design here -- closer to the fourth- and fifth-generation nanos than the last -- won't be universally liked, but the seventh-gen iPod nano is absolutely the best yet. It brings all the functionality of the last nano to the table and adds plenty more in a deliciously slender package. The integrated Nike+ functionality will make the runners happy and, while it still doesn't mark the return of video capture, we welcome the re-acquired video playback. At $149 for 16GB there are certainly plenty of cheaper options out there, but if you're looking for something tiny, something light, something beautiful and something that plays nice within the Apple ecosystem, stop looking.