Motorola is the next to patch Android's big video security flaw 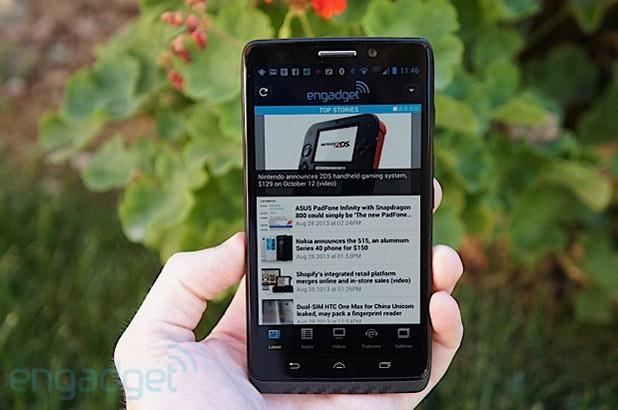 Motorola's Droid phones tend to arrive in packs. The original Droid RAZR was released just a couple months before the Droid RAZR Maxx -- essentially, the RAZR with a larger battery. The next year, the company followed up with the Droid RAZR HD, the RAZR M and the RAZR Maxx HD, the latter of which promised longer battery life. Then, after a long silence, the OEM finally broke its silence this past July. At a press event co-headlined by Verizon, Motorola announced its first products since being acquired by Google, once again choosing to launch three devices. We've already taken a look at the Droid Ultra, and in this review we'll focus on the largest of the trio, appropriately called the Droid Maxx.

Despite the fact that all three offer roughly the same mid-range specs, the Maxx stands out from the rest of its siblings thanks to its build, wireless-charging capability and -- surprise! -- its larger battery. But are these three factors important enough to justify paying $300 on-contract, when the Moto X, Droid Ultra and other flagships all cost $100 less? Let's find out.

In our review of the Droid Ultra, we concluded that there was no logical place for it in Verizon's lineup. Fortunately that's not the case with the Droid Maxx: it looks better, adds a few new components and just feels better-made. Where the Ultra featured a glossy, fingerprint-friendly plastic casing over a thin layer of Kevlar fiber, the Maxx makes use of a soft-touch finish instead. It's easier to grip, gives the phone more of a premium feel and masks fingerprints, to boot.

Just like the other two Maxx phones, this guy's distinguishing feature is its larger, 3,500mAh battery. It's a significant difference when you compare it to the 2,130mAh pack inside the Ultra, and yet it still fits neatly in an 8.5mm-thick frame. In fact, the Maxx is only a hair thicker up top than the Ultra, though it doesn't get much narrower as you approach the bottom, which is probably why Motorola was able to squeeze in that bigger cell. This gives us a lot more hope for battery life in future handsets; Moto has now proven that a thin phone can still deliver stellar runtime, so there's no reason other companies can't learn to do the same.

On the back, the Maxx borrows the same Kevlar pattern Motorola used in the RAZR Maxx HD. The rest of the phone's rear is arranged just like the Ultra: it has a 10MP ClearPixel camera near the top, with the LED flash on the left and speaker grille on the right. You'll also see the Droid logo just beneath, with the signature Verizon checkmark near the bottom, and the circular M logo closer to the middle. Flip the phone over and you'll once again be instantly reminded of the Ultra, as the two devices look identical from the front. The 5-inch AMOLED panel is there, along with a 2MP front-facing cam and earpiece on top, as well as three capacitive buttons and a small chin below the display. Unsurprisingly, the sides and edges all match up too: 3.5mm headphone jack on top, micro-USB port on the bottom and a volume rocker, nano-SIM tray and power button on the right. Curiously, this is the only part of the Maxx hardware that doesn't feel properly executed; the buttons jiggle more than they do on the Ultra.

In addition to the bigger battery and better feel, the Maxx also benefits from double the internal storage (32GB versus 16GB on the Ultra). The Maxx also supports Qi inductive charging, a feature that should have been included in the Ultra. Aside from these differences, the Maxx and the Ultra are otherwise identical. In other words, it's only worth forking over the extra $100 (over the Moto X and the Ultra) if you feel strongly about those few differentiators.

The display on the Maxx is the same size, panel type and resolution as on the Droid Ultra: this is a 5-inch, 720p AMOLED affair. This means you'll have more-saturated colors than a standard LCD and still have decent viewing angles, though screen brightness in daylight could be better. We'd prefer a 1080p panel on a $300 (on-contract) device, but the screen here is still acceptable, and we're guessing few people will care that it's not higher-res.

While the Droid Maxx brings a few welcome hardware improvements, the software experience is identical to what we saw on the Droid Ultra, so check out our review of that device for a thorough rundown of the UI and added features. In fact, Active Display, Touchless Controls and Droid Zap are present on all three of the new Droid phones, ensuring you get the same user experience across the board. Yes, this means you'll have the usual Verizon-branded bloatware, but you can at least disable most of these programs and put them out of sight. In short, then, spending an extra hundred dollars won't get you any features not already offered on the Ultra.

The same can be said about the Maxx's camera and everyday performance, so we won't take up too much time discussing them here. To recap, though, this has the same 10MP ClearPixel camera, RGBC sensor, f/2.4 aperture and 1.4μ pixel size, and the whole setup is just as inconsistent here as on the Ultra and Moto X. Under the hood, the phone makes use of Motorola's X8 architecture, which features a 1.7GHz dual-core Snapdragon S4 Pro chip, a quad-core Adreno 320 GPU clocked at 400MHz and two additional cores for natural-language processing and contextual computing. In a nutshell, the Maxx is more than adequate for most people's needs; only demanding power users will feel like they need a Snapdragon 800 instead. Of course, we'll never turn down extra computing power, and a device this expensive should have top-of-the-line specs, but nonetheless, the X8 will be sufficient for 99 percent of potential users.

Lastly, Motorola has always been a leader in call quality, and the Droid Maxx is no exception. All of our conversations were clear, and we didn't suffer any dropped calls, either. Additionally, the audio here is impressively loud; we never needed to crank the volume up to its full capacity, even when we were listening from the other side of a large room.

Since the Droid Maxx's main differentiating factor is its battery life, we're dedicating a full section to it. To recap, the Maxx features a 3,500mAh cell, up from 3,300 in the two previous models, making it the largest battery currently offered on any smartphone. Motorola claims you can get up to 48 hours of "mixed usage," but we never take a manufacturer at its word -- not only do companies tend to offer best-case numbers, but also the term "mixed usage" isn't even well-defined. Because battery life is arguably the number one reason you might want to buy the Maxx, we ran a few extra tests in addition to the ones we usually do. For the sake of comparison, we also ran several of the same tests on Motorola's other new devices: the Droid Ultra, Droid Mini and Moto X.

Before we delve into hard numbers, though, we first want to share our experience using the Maxx in the real world. For the purposes of testing, we used the phone in two different ways. Our first test included a lighter weekend workload -- e.g., checking emails, watching a few YouTube videos, surfing the web, reading long-form content and using social media. With that kind of use, we hit the 48-hour mark with 4 percent charge remaining (that was with 4.5 hours of total screen-on time). Our second test pushed the Maxx at much heavier workloads. Basically, we relied solely on the Maxx for all our mobile needs, including mobile hotspot tethering for a couple hours, listening to Google Play All Access for three hours and navigating to several meetings in the city using GPS along the way. And, of course, there was constant email interaction and plenty of multitasking to keep the phone busy. After all this, the Maxx died after 18 hours and 54 minutes, with nearly five hours of screen-on time. This was a nice change from the Ultra, which cut off after 13 hours of heavy use.

Next we ran our standard video rundown test, which consists of looping an HD video at half-brightness. In that scenario, the Maxx held out for 13 hours and five minutes, a three-hour improvement over the RAZR Maxx HD. In contrast, the Droid Mini lasted 6:13; the Ultra lasted 7:50. Talk time on the Droid Maxx lasted for 24 hours and 15 minutes; in comparison, the Droid Mini made it through 15 hours and 45 minutes. Finally, the Maxx lasted seven hours and six minutes through a browser test in which we cycled through several different popular websites -- this handily bested the others by no less than two hours.

These numbers are great, but does it hold the title for longest battery life in the market? We would have said yes until this past week, when we discovered that the LG G2 -- with its smaller, 3,000mAh battery -- actually lasts longer in real-world use and our standard video rundown test. Both deliver amazingly long runtime, so it's likely you'd be happy with either, but as you'll see, battery life isn't the only thing you should be considering as you make your decision.

Not many smartphones cost $300 on-contract in the US, but it seems to be a traditional starting point for Verizon's Maxx handsets: both of the Droid Maxx's predecessors launched with the same MSRP. It's also how much you've had to pay (at launch) for the Lumia 1020, the 32GB Samsung Galaxy S 4 and any 32GB iPhone (including the forthcoming 5s). So it's not as lonely at the top as you might expect. But does that really help justify the cost?

Normally we would say you get what you pay for in battery life -- and don't get us wrong, we're extremely happy with how long the Maxx lasts -- but as the LG G2 recently proved, you can be just as satisfied with a $200 phone. Meanwhile, the Maxx doesn't bring anything else to help justify the additional cost, so the only people who will want to fork over more money are folks who love the near-stock OS, Motorola's clever new features and need the epic battery life. If these things don't matter much to you, you might as well go with a less expensive flagship.

In our review of the Droid Ultra, we concluded that the device didn't need to exist in Verizon's lineup, not with the Moto X also on sale, anyway. We can't say the same of the Droid Maxx, though: its larger battery, superior build quality, wireless charging functionality and increased storage make it a worthier purchase. Really, the Maxx is exactly what the Ultra should have been in the first place, and it's proof that you can fit a huge battery in a thin chassis.

The only thing we can't swallow is the price. At $300, there's only one group of people that will choose this over $200 flagships: heavy users who absolutely need the epic runtime and prefer not to carry an external backup battery. This device will suit that demographic perfectly, but even then, we can think of at least one device that offers battery life and better components for $100 less. So, while the Maxx's existence is at least justified, the price is not.

In this article: droid maxx, DroidMaxx, google, mobilepostcross, motorola, motoroladroidmaxx, verizon, vzw
All products recommended by Engadget are selected by our editorial team, independent of our parent company. Some of our stories include affiliate links. If you buy something through one of these links, we may earn an affiliate commission.