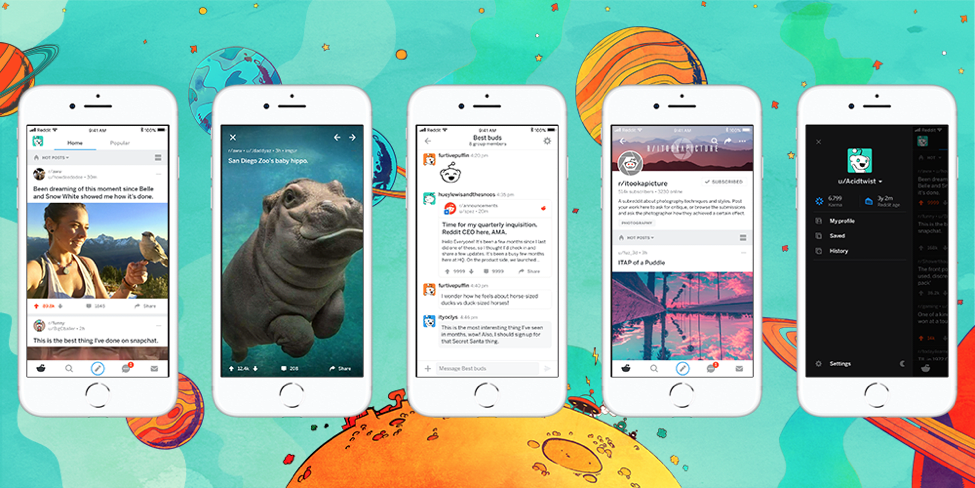 Reddit launched its mobile app last year and today it's getting a major update. The iOS and Android versions are getting a bunch of new features for both users and moderators that will more closely align the app's functionality with that of the web version.

First up, iPhone and iPad users will now be able to peruse images, gifs and videos in theater mode, which will allow them to view media in landscape mode and swipe left and right to see older or newer media posts. The iOS version of the app will also now support live comments, give users the option to use Safari as their in-app browser rather than Reddit's native one and allow users to talk one on one through a new chat feature. Android users are also getting the "speed read" button that iOS users have, which lets you quickly navigate through the top comments in any discussion.

Both iOS and Android users are also getting the ability to differentiate their posts by adding flair while "Cake Day" icons -- which acknowledge a user's Reddit anniversary -- and trophies -- which are earned through various accomplishments -- will now be available through the app. Additionally, user names of those who have created content being shared by others will be visible on the app's home feed.

There are also a handful of updates geared towards moderators that will be available on both iOS and Android. A new mod mode function will let moderators approve, remove or flag content through mobile where they'll also now be able to access modmail. Mod queue is also coming to the app, allowing mods to use bulk actions, as is the ability to invite new moderators, accept or decline invitations to be a mod and add or remove approved submitters to a community.

Those are quite a lot of changes. However, Reddit has also been pretty focused on tweaking its web version this year, so it only makes sense for it to bring more functionality to its app, especially as more and more Redditors begin to use it. This update is available now and Reddit says more are on the way.

In this article: android, app, gear, internet, ios, ipad, iphone, mobile, moderator, reddit, safari
All products recommended by Engadget are selected by our editorial team, independent of our parent company. Some of our stories include affiliate links. If you buy something through one of these links, we may earn an affiliate commission.