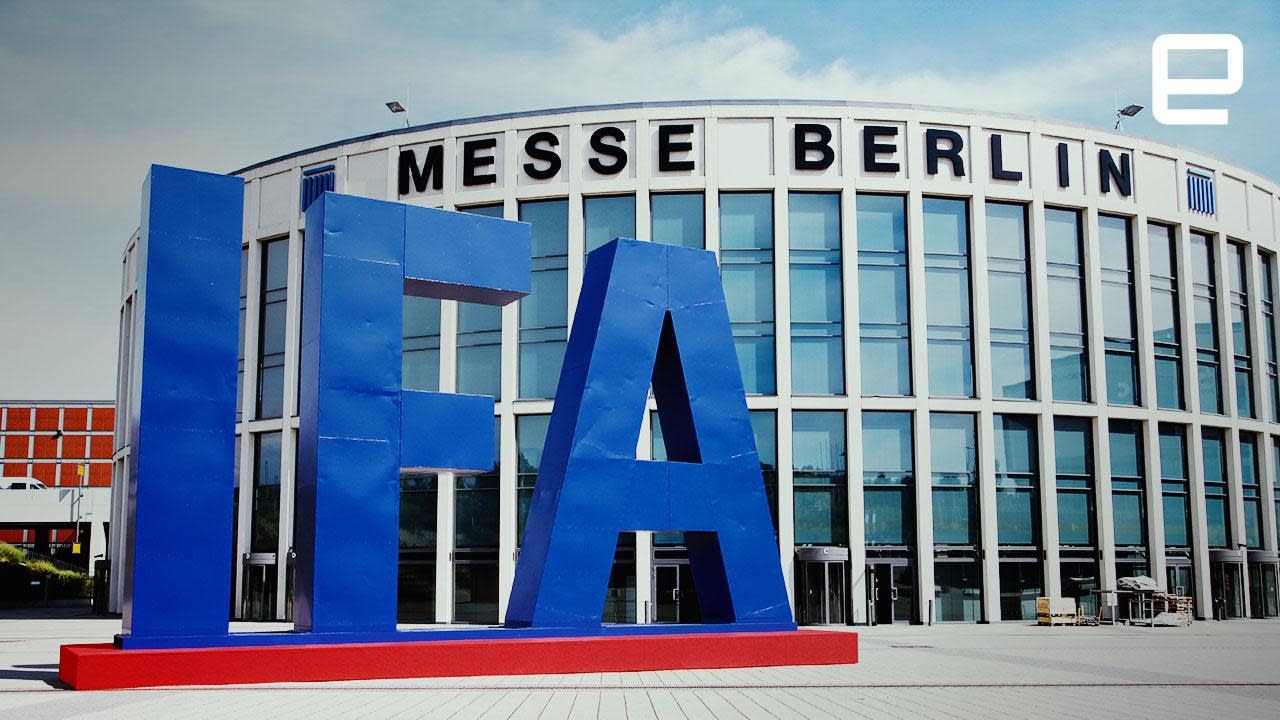 Of all the annual meetings of tech-obsessed minds, IFA is perhaps the most unpredictable. You know everyone and their mother is going to CES to set the tone for the year, and MWC is all things mobile. At IFA, though, you never quite know what surprises lurk behind the floor-to-ceiling displays of kitchen appliances that dominate the halls of the sprawling Messe Berlin conference center. History and rumors give us some idea, however. Naturally, we'll be on the ground to bring you all the important news, but these are some of things we expect to see announced at this year's show. It wouldn't be IFA without Sony announcing a new smartphone or two. Last year, it was the Xperia XZ1 and XZ1 Compact. And in 2018, we've already been introduced to the XZ2, XZ2 Compact and more recently, the XZ2 Premium. Logic would dictate, then, that we'll welcome the Xperia XZ3 into the world at IFA.

Rumors surrounding the XZ3 have primarily come from suspicious benchmarks and case makers, which always need to be taken with a pinch of salt even if there's rarely smoke without fire. The most comprehensive but not necessarily credible leak comes from the UK branch of online retailer MobileFun, which actually has a listing for the XZ3 on its site.

Purported specs paint the XZ3 as another iterative flagship. There's some debate about whether it'll feature the same dual-camera setup as the XZ2 Premium or Sony's new 48-megapixel smartphone sensor. We're also unsure if the XZ3 will be joined by a Compact companion this year, but at this point it looks like we'll have to wait until Sony's press conference on August 30th to find out for sure. Huawei's also hosting a press conference at IFA, and little birdies suggest the Mate 20 family of devices will be revealed onstage. XDA Developers claims to have seen legitimate pictures of the Mate 20, complete with a relatively unobtrusive teardrop notch -- much like the Essential PH-1. Continuing the message of the Mate series being Huawei's answer to the Note, the Mate 20 reportedly sports a big 6.3-inch display, big battery and other flagship-grade components.

There are indications a "lite" version with inferior guts, as well as a "pro" model with even larger 6.9-inch display and three cameras on its back like the P20 Pro, could end up making the Mate 20 family three members strong. The rumor mill might be getting ahead of itself in this instance, however. Last year, Huawei talked up its latest processor at IFA and saved the official Mate launch for after the show. It could always do the same thing this time around, focusing on the upcoming Kirin 980 chip and keeping quiet on the phones it's about to show up in. We could see a similar situation develop with LG too. Last year, the company introduced its V30 smartphone at IFA, and while the collective chatter of the internet generally agrees a V40 (or more likely, a V40 ThinQ) is incoming, we're not clear on exactly when. Serial leakster Evan Blass said earlier this year it's due out in late summer or early fall. Whether LG will use IFA as the launchpad or host a separate event later, however, is anyone's guess right now.

TCL, aka the company responsible for the BlackBerry smartphone brand, definitely has something to announce at the show. The KEY2 only came out a few months ago, but BlackBerry rumors of late suggest that a lite edition of that handset, the KEY2 LE, is due to be unveiled any day now. This supposedly has a few minor component downgrades and colorful plastic options as opposed to the metal and glass of the regular KEY2. The handset's price tag will arguably be the most interesting thing about it, since affordability is going to be the big draw here.

We're bound to see a whole buffet of new smartwatches and fitness trackers debut at IFA. Fossil, for example, usually brings hundreds of the things from the many brands that sit under its umbrella. That said, it's shaping up to be a pretty fallow year for important, big-name launches.

Wearables isn't the hot product category it was a few years ago, but it's certainly not dead. Google has just redesigned its Fit app for Wear OS, and Fitbit announced the Charge 3 only a few days ago. Samsung also unveiled its new Galaxy Watch a couple of weeks back, but that's all happened before IFA. And Google's rumored Pixel smartwatches are thought to be holding tight for fall.

LG is said to be working on a new smartwatch and we've seen some interesting patents from Huawei recently, but rumors that wearables from these companies will break cover at IFA are too sketchy to be relied upon. The acronyms 4K and HDR are soooo last year, though there will no doubt be walls of TVs at IFA labeled as such. Alongside some perhaps more-mundane launches, there's fairly concrete evidence that Samsung will introduce an 8K QLED TV at this year's show, even if we only get to see it looping an 8K clip shot specifically to wow passersby. Samsung will almost certainly bring its 146-inch 4K MicroLED The Wall TV to Berlin, too, since consumers will be able to buy it soon enough.

Rumor has it LG might show off an even bigger, 175-inch MicroLED TV at IFA, but it's not guaranteed. Hopefully we'll see some quirky stuff regardless -- something along the lines of the ridiculous $16,000 moving TV from B&O or the neat and stylish Samsung Frame, both of which made an appearance last year. You couldn't walk the halls of IFA last year without running into a new pair of wireless earbuds, and it'll be interesting to see whether that form factor is omnipresent in 2018. High-end headphones are a pretty common sight at IFA, though, so we're confident on there being at least a few new sets of ear-pleasing cans debuting at this year's show. We already know that RHA will be bringing along the world's first planar magnetic wireless earphones, for example.

New speakers are also standard fare at IFA, but of course you daren't release a home audio product without an AI assistant built in these days. We expect more of the same this year, though we're keen to see whether Amazon's Alexa or Google's Assistant will be the most popular prisoner of choice. With the likes of Acer, Lenovo and ASUS showing up in Berlin, at least a few new laptops and hybrids are bound to be announced at the show. This isn't a category renowned for innovation -- not lately, anyway -- but we'll still get to see the latest hardware due out in the coming months. And you never know, something might surprise us.

NVIDIA's just announced its latest round of graphics cards, but it's probably a bit too early to see them showing up in laptops. The latest desktop models, however, feature VirtualLink, which is like an umbilical cord for VR headsets. It means a lone tether can feed facehuggers with all the power and data they need, and we'd be surprised if demos of the fresh tech weren't available on the show floor.

Windows Mixed Reality headsets had a significant presence at IFA last year, with Lenovo and ASUS both showing off models in Berlin. We'll have to wait and see whether mixed reality will be a thing again this year though.

Smart appliances, on the other hand, will no doubt be at IFA in droves. LG's already said as much, teasing a bunch of stuff that feeds into its ThinQ AI platform. Samsung is similarly invested in making everything smart and communicative, so there'll certainly be plenty of new home appliances ready to slot into our already connected lives.

What we're most excited about, though, is exploring every nook and cranny of Messe Berlin in search of the inevitable oddities hidden there, like Bosch's stain scanner from last year. LG's already said its first exoskeleton will be on show too.

What not to expect Apart from an 8K TV and some funky smart appliances from Samsung, we don't expect anything in the way of surprises. In August alone, the company has announced the Galaxy Tab S4, the new Note 9, the Galaxy Watch and the Galaxy Home, the Bixby-powered smart speaker. The likelihood that Samsung has another ace up its sleeve is slim to none.

We also don't reckon Motorola will appear in many headlines this year, if any at all. Last year, the company announced the Moto X4 at IFA, but the new Moto Z3 debuted less than a month ago. It probably wouldn't make sense to launch another smartphone so soon, and Motorola doesn't do wearables anymore. There's also a distinct lack of rumors suggesting anything more than a token presence as part of the Lenovo family. What we're most bummed about is Sphero telling us it's not announcing anything at the show this year. Typically the company has new and always fun Star Wars toys for us to play with in the 30 seconds of downtime we get each day. Alas, not this time. Thanks for nothing, Sphero.

In this article: acer, asus, av, blackberry, gear, home, ifa2018, lenovo, lg, mobile, personal computing, personalcomputing, robots, samsung, sony, wearables
All products recommended by Engadget are selected by our editorial team, independent of our parent company. Some of our stories include affiliate links. If you buy something through one of these links, we may earn an affiliate commission.