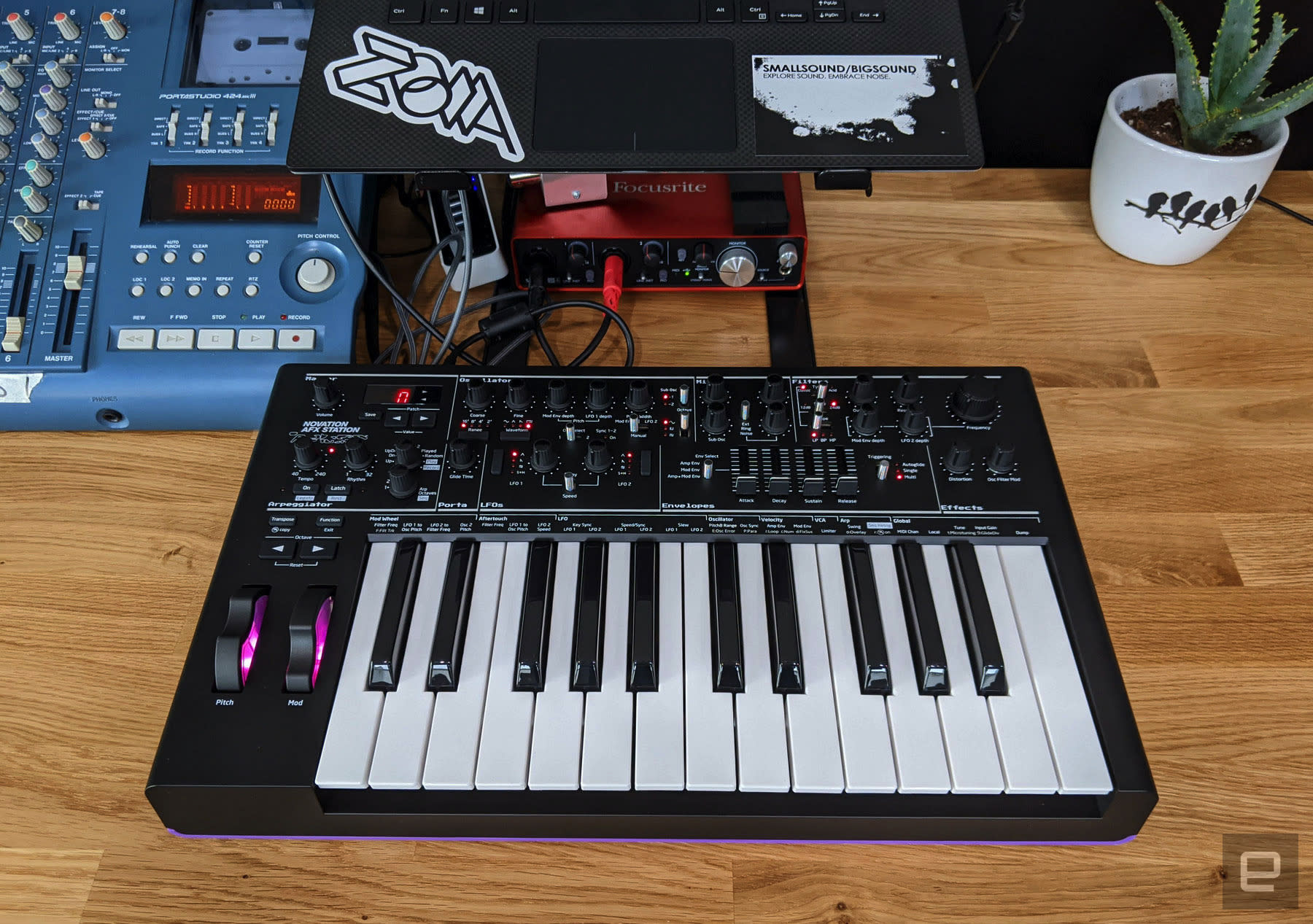 The $440 AFX Station creates wonderful chaos and turns the synth into a rhythmic powerhouse.

Novation’s Bass Station II is considered a modern classic in the synth world. And, the company deserves a lot of credit for constantly issuing updates and expanding its feature set. In fact, even though the core three-oscillator analog sound engine is unchanged, the 2020 version of the Bass Station II feels like a completely different instrument from the one launched in 2013. This is, objectively, a great thing. We can only hope that other companies show their legacy products the same attention and affection that Novation does. But, there’s one big problem: After years of adding features, there are countless functions that you just won’t find labels for on the front panel of your trusty Bass Station.

One of the biggest additions came last year in AFX Mode (we’ll get to the details later), which was created in collaboration with Aphex Twin himself, Mr Richard D. James. So the next step, obviously, was for the two to join forces on a special Aphex Twin edition of the synth, dubbed the AFX Station. (It’s worth noting that Aphex Twin was also involved in the development of the Korg Monologue, so he’s clearly got an interest in affordable monosynths.)

The most immediate difference here is the design. But this isn’t just an aesthetic change, the labels have been completely revamped to make all the latest features easily accessible -- you no longer have to remember that function and a double press of the second F# key is how you enable AFX Mode overlays.

This might seem like a minor change, but trust me it makes a world of difference. The Bass Station interface is already pretty complex. So piling hidden features on top could make it quite intimidating to a novice. It’s one of the reasons why I hesitated to recommend it in my beginners guide to buying a synth. (That and the $440 asking price put it a bit above what we considered “entry level.”)

The overall look is also quite a bit darker and more modern. The somewhat dated boxy blue and black has been replaced with a retro black and white scheme, featuring pixelated fonts and purple highlights. The whole thing has an 80s computer vibe. The body is still bulky and boxy; you can definitely tell this isn’t an instrument designed in 2020, but the facelift makes feel more current. To be fair, unlike a lot of other mainstream synths out there, the Bass Station has full sized keys. And honestly, I’d gotten so used to minikeys, which I’d almost forgotten what playing on full sized keys was like.

To complete the package, the AFX Station is preloaded with the latest firmware and AFX Mode already installed. This adds features like extended sub oscillator controls and glide diverge (meaning the two oscillators will glide to a target note at different rates). More importantly, it adds what Novation calls “overlays,” which essentially let you create a different synth patch on each key (almost like sample locking). This enables you to play crazy glitchy leads and bass lines that mutate with every note and even turn the Bass Station into a full fledged drum machine. It’s one of the most unique features I’ve ever seen on a synth.

Rounding out the updates are seven new overlays (you can have eight in total) and 128 new presets from artists likes Noyze Lab, Richard Devine, Lightbath, rbeny and Perplex On. While there are plenty of classic leads, basses and even a few pads. A lot of the new patches play to the Bass Station’s weird side and new rhythmic characteristics.

I know that AFX Mode is basically a year old at this point, but I hadn’t had a chance to use it in person until now. And I’ve got to say it’s even more impressive than I expected. It’s just insanely fun to jam with and create crazy glitchy rhythmic parts on. It’s not often I find myself just getting lost in crafting drum parts, but I could easily spend hours just creating organized chaos.

Keeping track of your overlays can get pretty complicated, but Novation added a manager to their Components software tool which does help a bit.

Considering the updated look, exciting new presets and feature complete interface, it’s clear the AFX Station is the version of the Bass Station II to get if you’re in the market for a new one. Especially since it’s the same price -- $440.

All products recommended by Engadget are selected by our editorial team, independent of our parent company. Some of our stories include affiliate links. If you buy something through one of these links, we may earn an affiliate commission. All prices are correct at the time of publishing.
View All Comments
Novation and Aphex Twin's limited-edition Bass Station II embraces the weird