Google is relatively new to the hardware game -- at least compared to rivals Apple and Samsung. Its latest devices have been a mix of hits and misses. The Home Hub and the Pixel phones are excellent, while the Pixelbook has become something of a cult favorite. But then you have disappointments like the Pixel Slate, Pixel C and the Clips camera, each quirky in its own way. The Pixel phones still only sport single rear cameras. And while the Slate certainly has one of the best screens in its class, that tablet has an otherwise generic design. Other than the Home Hub and Pixel phones, we've tended to score Google's devices somewhere in the 70s -- and that's true even today. Those ratings are middling at best, and terrible compared to the competition.

But it's not just what's outside that matters. When it comes to Google's products, software can not only make up for lackluster hardware, but even give the company's devices an edge over competing gadgets. This year, Google delivered thoughtful software and truly helpful AI that made some of its otherwise mediocre devices surprisingly compelling.

The Pixel 3 is the best example. Physically, the phone is a more premium version of the Pixel 2. It also comes in a really nice "Not Pink" color. But aside from that, nothing about the Pixel 3's design makes me yearn for the phone. In fact, the 3 XL even has one of the biggest screen notches in the market, which some people find hideous. And yet, the Pixel 3s were still one of our favorite phones of the year, and ended up on our best gadgets list.

But if you can stomach the notch, or don't mind using the smaller phone, then boy, will you be blown away by Google's software. Let's start with my favorite -- Call Screening.

On the Pixels, you can have Assistant field calls for you without having to answer the phone or even say a single word. It's easy to dismiss this feature as simply a glorified voice messaging system, but it's so much more than that. Assistant will ask your caller what they want, transcribe what they're saying in real time and suggest actions for you. Say you realize it's your doctor calling. You could ask them more questions, dictate a real time reply, or use a preset action like hang up or promise to call back. Can your voicemail do that? I don't think so. 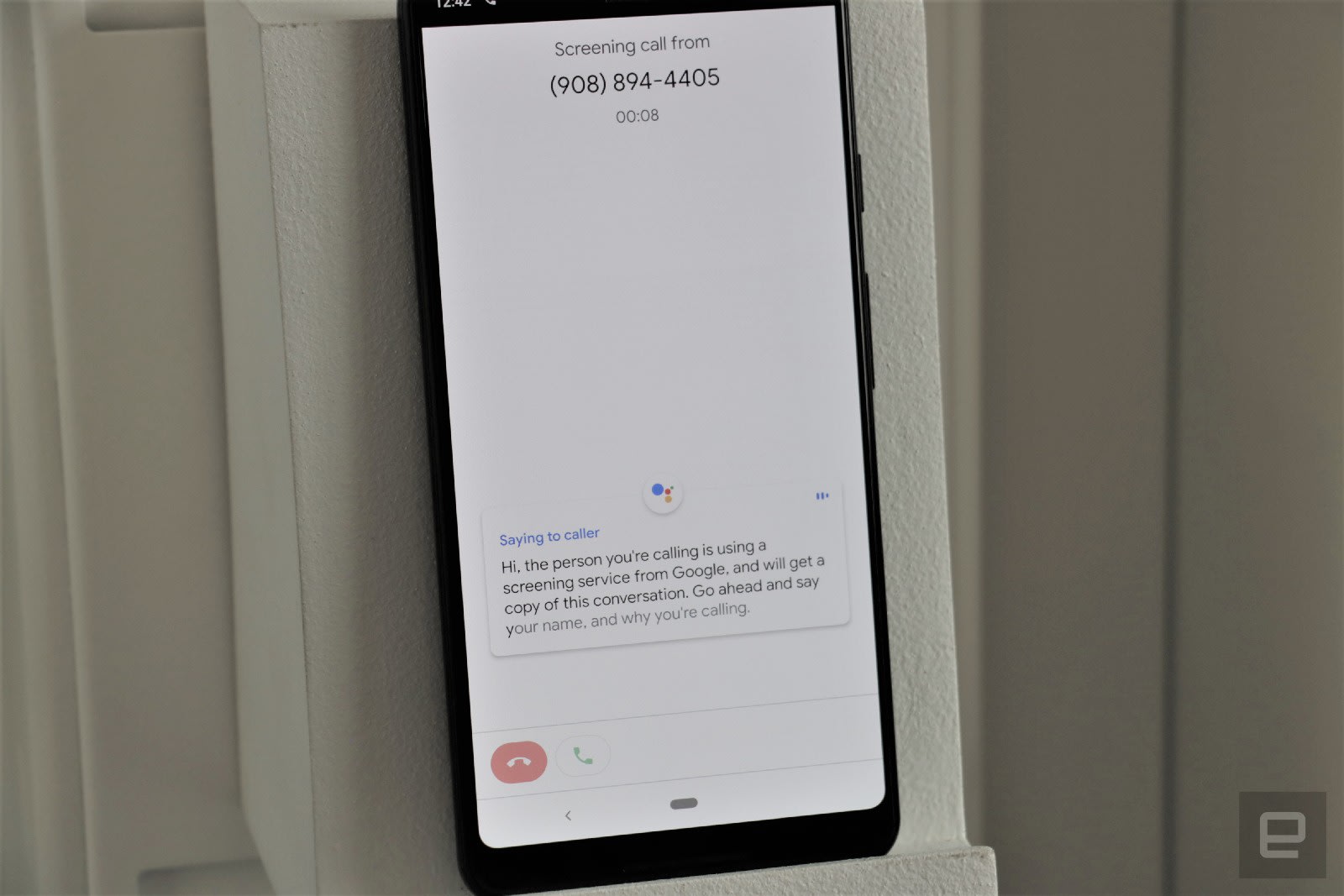 Obviously, the best application of call screening is in reducing the number of telemarketing and robocalls you answer. But it can also help when you can't speak or just don't want to. And so many people have embraced Call Screen because it actually solves a problem in our lives.

Call Screen builds on technology that Google rolled out earlier called Duplex and I'll admit, I had a lot of concerns at first over how uncanny and realistic Assistant sounded. It was even able to mimic tonal inflections to replicate human traits like hesitation and imperfection. But just the fact that Google was able to get its AI to sound so natural is laudable, even if it gives me the creeps. Plus, Duplex is actually a helpful piece of software. It connects restaurants that might not have modern booking systems to a world of people who would rather not pick up the phone to make a reservation. Assistant can make the call instead.

Nowhere is the importance of software exemplified as effectively as it is in Google's imaging algorithms, which are so powerful they helped the Pixel 3 nab the smartphone camera crown in our tests. Not only can the phones capture clear, colorful pictures with just a single rear camera, but the Pixels produced the nicest Portrait mode effects using pure software alone. And with the magical Night Sight mode, Google easily kicked Apple and Samsung's butts in low light photography, turning dark, noisy pictures into shots that look like they were taken in daytime.

I also loved this year's Fit and Maps redesigns, which made both those apps much more helpful. And at I/O, Google showed off an upcoming AR feature that will make getting directions easier. You could just hold up your phone and it will show an onscreen arrow toward the real-life direction you should go. Just think how much easier that will make navigating to that obscure bar your date picked -- you won't have to wonder which street you're on or whether you're facing east. This feature isn't live yet, but based on the demo and Google's track record of delivering seriously smart software, this could be a game changer. 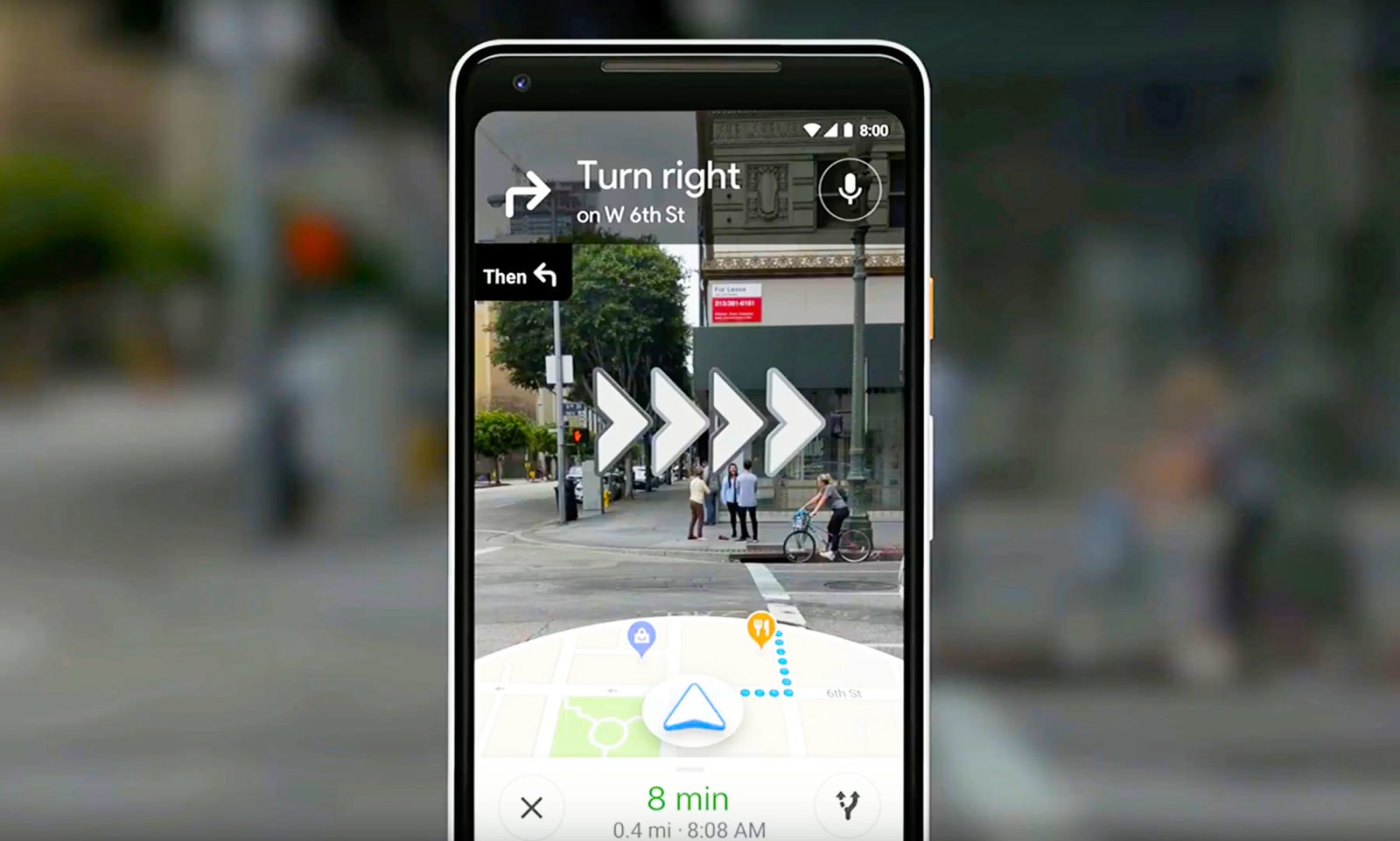 On other Google devices like the Pixel Slate, for example, software is also the biggest selling point. The company tweaked Chrome OS to be touch-friendly in tablet mode while remaining powerful and great for multitasking in desktop mode. Sadly, though, and almost ironically, buggy software is what kept the Pixel Slate from being a great tablet for work and play.

Google's software isn't perfect. The Android 9 Pie rollout this year was plagued with bugs, and many new Pixel 3 owners complained of issues like photos not saving or the camera not working. And while the redesign of Wear OS did make the smartwatch software feel less like Android repurposed for a wearable, it's still limited compared to Apple's WatchOS.

But perhaps bugs are a price you have to pay for being on the bleeding edge. Google's software is so far ahead of its consumer tech rivals because the company consistently pushes out ideas that aren't finished. Some of them are bad, some of them are broken, but when Google gets it right, like it has with Night Sight and Call Screening, the result is nothing short of magical. Companies don't often make features that are truly helpful, but in 2018, Google proved its software can change your life.