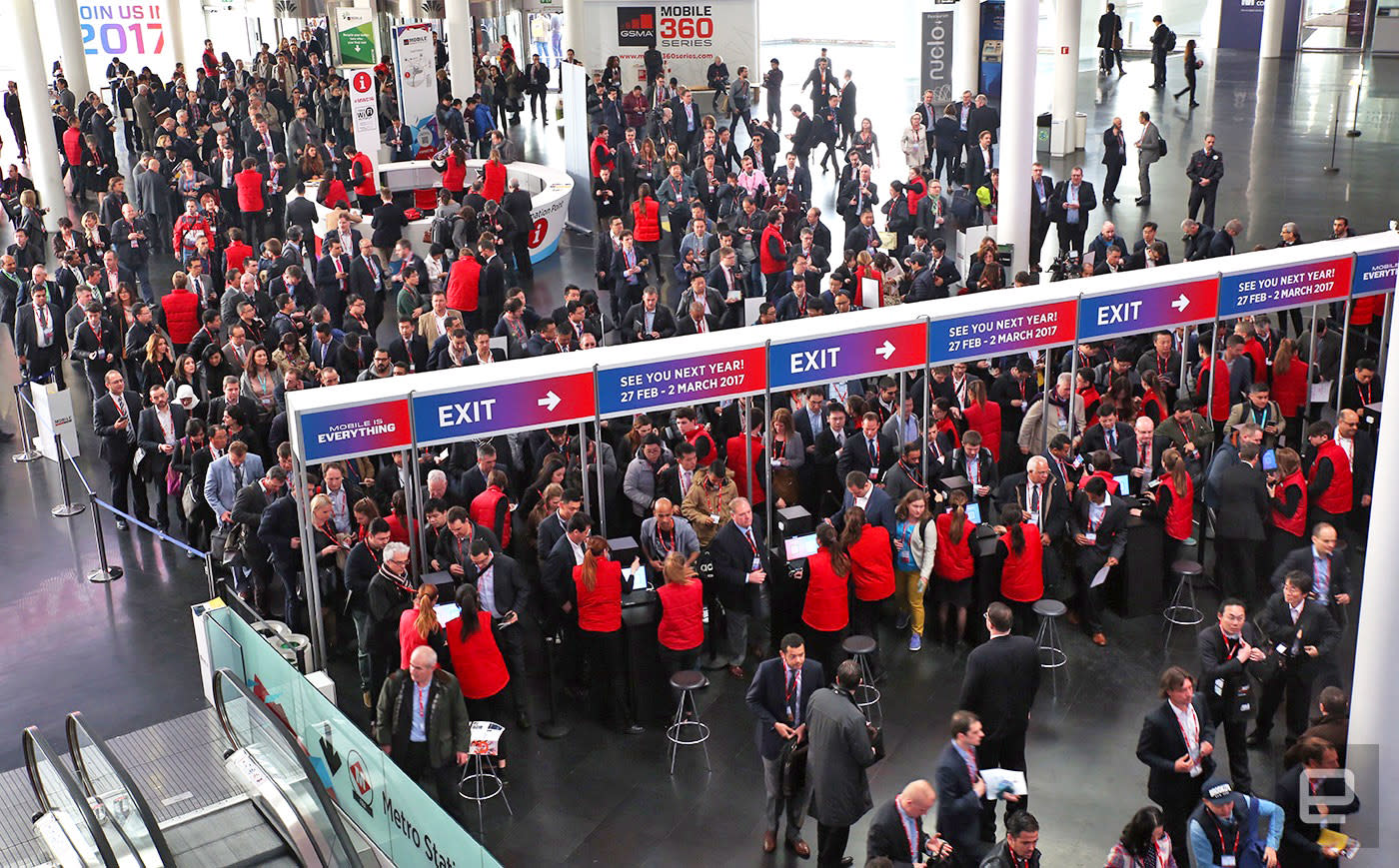 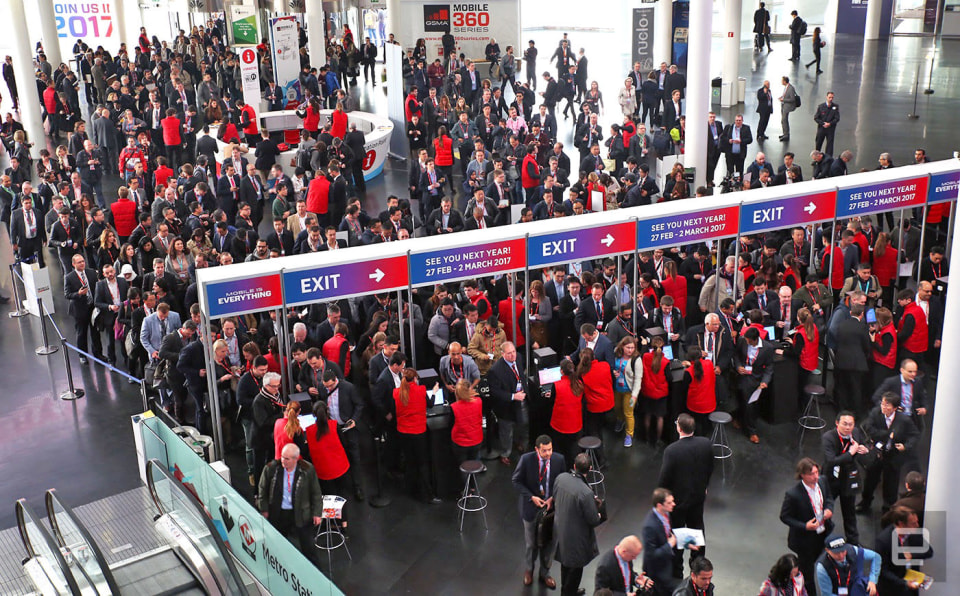 It's that time of year again. Barcelona, with its stunning architecture and succulent jamón, will soon be packed with new smartphones, tablets, wearables, networking gear, app developers and, well, tech journalists like us. By the time you're reading this, we'll already be on the ground in Spain, laying the foundation for a week of intense coverage. Read on for a rundown of what we expect to see as the show unfolds. I'll admit, I was swept up in the sheer novelty of last year's G5, but that modular gamble hasn't paid off the way LG hoped. That explains why the G6, which LG has already revealed in drips and drabs, seems like a dramatic change. All signs point to the G6 being a non-modular device, which, while unsurprising in some ways, should come as a blow to G5 adopters who believed the company when it said those bolt-on Friend accessories would be compatible with this year's flagship phone. Still, some things are familiar: It packs an upgraded quad-DAC for high-resolution audio (like last year's V20), as well as a dual-camera setup similar to what was used on the original G5.

That's not to say the rest of the package as we understand it isn't a little weird. LG has confirmed that the phone will have a big screen running at an odd aspect ratio (18:9, compared with 16:9 on most other phones). Rumors also suggest that the device will pack a relatively common Snapdragon 821 chipset instead of the newer, more powerful Snapdragon 835. That would be a bummer, but there might be one big silver lining: Reports claim that the G6 will be the first non-Pixel smartphone to integrate Google's Assistant. Considering that the V20 was the first phone to ship with Android 7.0 Nougat preloaded, we'd be a little surprised if that last tidbit weren't true. In years past, HTC used MWC as a launching point for whatever new flagship it was working on that year. This year, however, the company pulled back the curtain on the U Play and flagship-level U Ultra closer to CES, leaving HTC without new high-end hardware to show off in Spain. It's an unorthodox approach but one that another competitor is running with too. This year is a peculiar one for Samsung as well: It's the first year in a long time when the company isn't unveiling its new flagship smartphone in Barcelona. The Galaxy S8 should make its official debut shortly after MWC, but we have word of new tablets in Spain to keep us satisfied. One is a follow-up to last year's Galaxy Tab S2, predictably called the Tab S3. Reports point to a 9.7-inch Super AMOLED screen and a Snapdragon 820 chip -- all the rage in last year's flagships -- with an included S Pen, to boot. We're also hearing Samsung will have another ultraportable Windows 10 tablet called the Galaxy Book. Conceptually, it'll be pretty similar to the awkwardly named Galaxy TabPro S, with one of Intel's Kaby Lake i5 processors. Surprise, surprise: This tablet will apparently come with an S Pen of its own, which only makes sense given Windows' penchant for pen inputs.

Beyond the stuff you'd normally expect at a show like this, Samsung also confirmed it's bringing some goodies from its experimental C-Lab. This time, it's mostly AR and VR stuff, including a pair of glasses that could replace your traditional PC monitor as well as a Gear VR app that pledges to help the vision-impaired watch TV and read screens more clearly. Remember, this is a part of the company where employees are encouraged to pursue offbeat ideas and generally act with the flexibility of a startup, so a little weirdness is to be expected. No surprise here: Huawei will unveil its new P10 smartphone at the show, most likely with an all-metal body and the usual dual-Leica camera setup. That should sound pretty familiar, but new to the mix are a slew of unexpected colors unearthed by prolific leaker Evan Blass. At this point, it looks like the fingerprint scanner has been moved to the phone's front, under the screen, and it supposedly uses a Kirin 960 chipset with 4GB to 6GB of RAM and between 32GB and 128GB of storage. Like before, there's persistent word of a bigger, more premium model -- in this case, the P10 Plus. Leaked renders suggest it might have a curved screen similar to the S7 Edge. It's also clear that Huawei will launch a new Android Wear 2.0 watch at the show. Most recently, a teaser image posted to Weibo points to a sportier build than the original. Also on deck is optional 4G LTE connectivity, which has become a hallmark feature of high-end wearables -- just look at Samsung's Gear S3 Frontier and the LG Watch Sport. There's currently no word on whether a classier model or a model specifically for women is in the works, but hey, what fun would this show be without surprises? The love-them-or-hate-them Xperias Sony unveiled last year were a bit of a surprise, and you can expect even more this year. Rumors point to a broad array of Sony phones, the most exciting of which is said to pack a 5.5-inch 4K screen and one of Qualcomm's brand-new Snapdragon 835 chipsets. That sounds like serious flagship horsepower, which feels downright refreshing when you consider how little Sony pushed the envelope with the X Performance (pictured above). The rest of the lineup is considerably more midrange. In particular, we might also see new Xperia XA phones packing Mediatek P20 chipsets and 23-megapixel rear cameras to round out Sony's portfolio.

We'd also be surprised if Sony didn't have a projector-related announcement this year. After all, the Xperia Projector was revealed as a fascinating concept at MWC 2016, and a version we saw briefly at CES 2017 seemed close to ready for the masses. Turning any wall into a touch-friendly Android interface is no small feat, though, so maybe its time hasn't come yet -- the rumor mill has been pretty quiet about it. ZTE might have more secrets up its sleeve, but it already announced what is probably its more important device. It's called the Gigabit phone (for now), and as the name implies, it's a device capable of super-high-speed data connections that should make 360-degree VR, 4K video streaming and truly seamless cloud storage a real possibility. Alas, this high-speed tech obviously requires some serious network infrastructure: Good thing it looks like 2017 is the year real-world 5G testing will finally start ramping up. We wouldn't be shocked to see some midrange stuff from ZTE too but do know that its style-conscious Nubia sub-brand will have a presence on the show floor. Too bad that stuff never winds up in the US. Credit to Lenovo for doing a nice job staying off the radar: We've heard that there will be at least one new Android tablet in the works and a new Yoga 720 Windows 10 convertible if we're lucky. Beyond that, most of the major leaks have come courtesy of Motorola. We're positive at this point that we'll see two 5th-generation Moto G phones at MWC, one of which will have a 1.4GHz Snapdragon 430 chipset, 2GB of RAM, 32GB of storage and a 5-inch display.

Moto G5 Plus for Verizon. pic.twitter.com/XfmzLMc8zn

Meanwhile, the Plus model will pack a bigger screen and a faster Snapdragon 625 processor. Fair enough, but we're more impressed with the G5 aesthetic than the specs these phones sport: It looks like we're getting curvaceous, comfortable-looking metal bodies that come off as more premium than prior models. TCL might be one of the busiest companies at MWC this year. Part of that is because of its fascinating partnership with BlackBerry to develop devices like the impressive new BlackBerry Mercury. That code name may well disappear soon, but the device itself is still full of that BlackBerry DNA -- after all, it was designed with BlackBerry and packs a great (so far) physical QWERTY keyboard. Sure, we saw it at CES already, but (barring any major mishaps) it'll be out in the wild shortly.

Meanwhile, TCL's Alcatel brand might have a modular smartphone of its own with a removable back to show off at MWC. If true, that would make Alcatel's approach more Motorola than LG, and that might be a good thing indeed. We're hearing the brand will also have four other phones to announce, though the juicy details are hard to come by at this point. While we're on the subject of unexpected companies representing storied brands, HMD-owned Nokia should show off around four new smartphones at MWC. That might seem a like a lot for a company trying to revive the Nokia name, but don't forget the China-only Nokia 6 sold out within a minute. No wonder Nokia's new parent company is prepping some follow-ups.

The rumor mill says the Nokia 3 will be a lower-end device with a plastic body while the slightly higher-end Nokia 5 comes swathed in metal. The 8, meanwhile, could be a full-on flagship device with a 24-megapixel rear camera and a Snapdragon 835 chipset if whispers hold true. We're hoping the specifics surrounding the 8 are true though; it's been a long time since we've seen a properly lust-worthy Nokia phone.

Most exciting, though, are rumors that the classic 3310 will make some kind of return at MWC. Is it a feature phone? Some sort of rugged, Android-powered affair designed to pick up where the original 3310 left off? We're not sure, but we hope it'll take a beating as well as Nokia's truly classic candy-bar phone did years ago.

In this article: gear, mobile, mobileworldcongress, mwc, mwc2017
All products recommended by Engadget are selected by our editorial team, independent of our parent company. Some of our stories include affiliate links. If you buy something through one of these links, we may earn an affiliate commission.