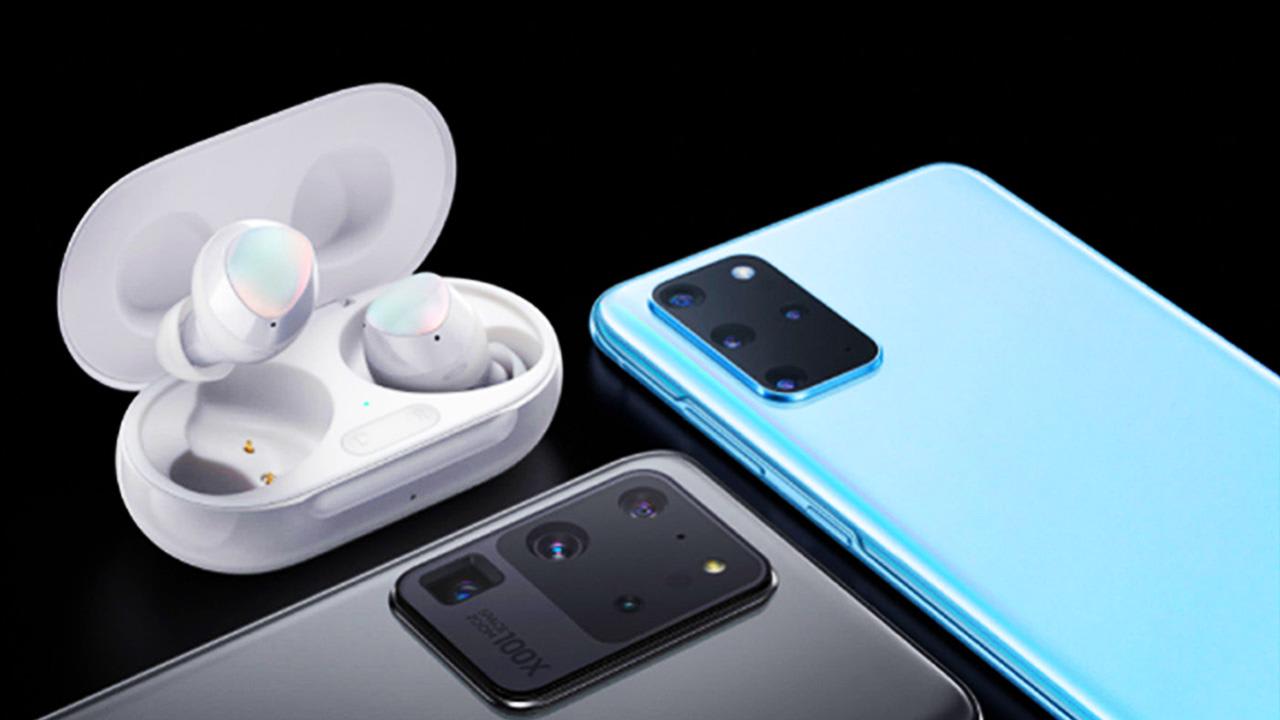 We're less than a week away from Samsung's Unpacked event on February 11th, and, as in previous years, there's been a deluge of pre-release leaks and reports detailing almost every aspect of the company's upcoming devices. We expect Samsung to announce new Galaxy S-series phones alongside a clamshell foldable as well as several other devices. The company may also provide us with a release date for the Galaxy Home. Here's everything we know so far about the products Samsung will likely announce at the event. 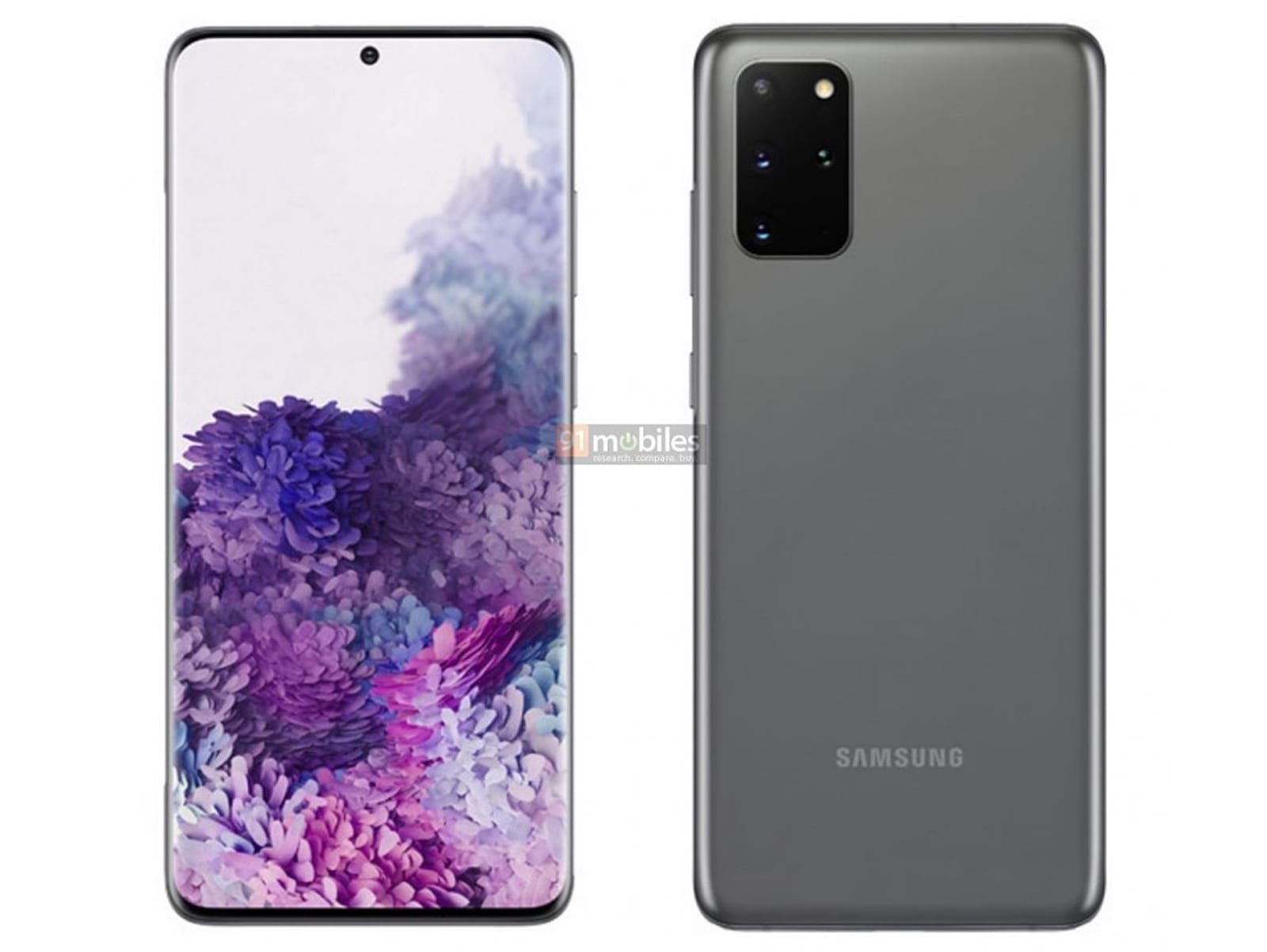 Let's start with the obvious. We all know Samsung will update its current Galaxy S-series flagships, the S10 and S10+. This year, however, the company's new phones will be known as the S20 and S20+, according to an early leak from Ice Universe, later corroborated by several other reports.

New names aside, XDA Developers' Max Weinbach suggests the highlight of the S20 and S20+ will be a new 120Hz display. The 120Hz screen will, at the cost of battery life, help smooth out animations and should make the phones feel more responsive to touch navigation. In a way, Samsung is playing catch up here since a couple of other Android phone manufacturers, including OnePlus and ASUS, have already added high-refresh-rate displays to their phones. The effect will be most noticeable when playing games that render at or near 120 frames per second, but you'll also notice it doing something as simple as flipping between home screens. However, the caveat, according to Weinbach, is that the phones will only max out at 120Hz when you limit the resolution of their displays to 1080p. Expect lower refresh rates at higher resolutions.

Samsung may also tweak the cameras on the S20 and S20+. They'll reportedly come with a 12-megapixel primary camera, a telephoto lens with a 64-megapixel sensor and an ultra-wide lens with a 12-megapixel sensor. According to XDA Developers, the telephoto camera will offer 3x optical zoom and 30x digital zoom. The S20+ may also include a time-of-flight (ToF) sensor, which you'll also find on the Galaxy S10+ 5G. The fact that the S20's main camera doesn't have the phone's highest resolution sensor might seem like a head-scratcher, but a 64-megapixel sensor makes a lot of sense in the context of a camera you will use almost exclusively to zoom in on subjects. Digital zoom works by cropping in an image. Having more pixels to work with means the end result won't be the usual grainy mess we often associate with digital zoom. Reports suggest there will also be support for 8K video capture at 24 frames per second.

Based on a recent trademark filing, Samsung will likely augment the S20's low-light capabilities with new software called Super ISO. We don't know exactly how this feature will work, but the name suggests it may allow you to push the ISO sensitivity of the S20's camera sensors beyond their usual ceiling, in turn enabling the cameras to capture brighter shots in low light. It'll be interesting to see whether Samsung achieves this without adding excess noise to photos.

The S20 and S20+ will continue the confusing tradition of Samsung using different processors in different markets. In the US, the S20 and S20+ will likely have Qualcomm's new Snapdragon 865 processor and accompanying X55 modem. Effectively, this should allow the two phones to offer both LTE and 5G connectivity simultaneously, so you won't have to buy a separate, more expensive variant to see what all the hype about 5G is about -- and carriers can pitch and sell a single phone to all of us, whether we care about 5G or not.

Besides those upgrades, the S20 and S20+ look like they'll be mostly iterative updates on the S10 and S10+. From leaked photos, we can tell they'll have the same Infinity-O hole-punch displays of their predecessors -- though with the cutout moved to the top-middle of the screen and a slightly taller 20:9 aspect ratio. It also appears they'll be larger than their predecessors, with the S20 featuring a 6.2-inch screen instead of a 6.1-inch one like the S10, while the S20+ will have a 6.7-inch display rather than a 6.4-inch screen like the S10+.

However, the most significant physical change is that neither phone looks like it'll have a headphone jack. You could have guessed this was coming when Samsung announced the Note 10 and Galaxy Fold -- both without the jack. Still, it's fair to say most Samsung fans will be disappointed -- especially since the company was one of the last notable holdouts.

From a software perspective, we're not expecting a major overhaul like we saw last year with One UI. That said, Samsung could introduce the AirDrop-like Quick Share. Just like AirDrop, it will let you quickly and easily transfer files between two Samsung phones so you can share memes, videos and photos with friends and family. 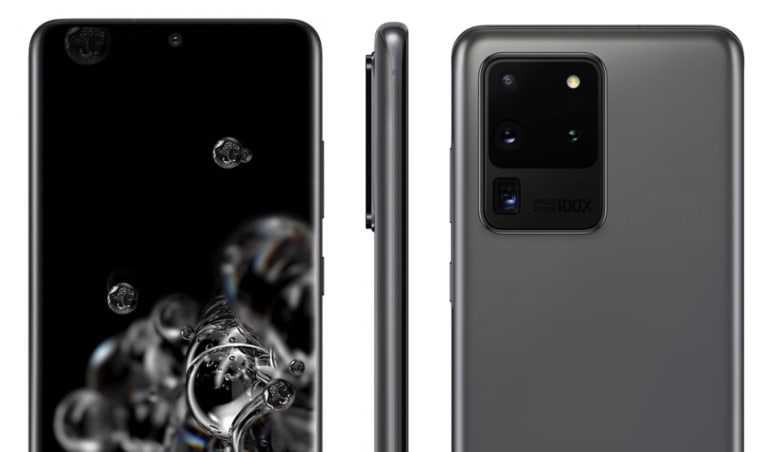 Rumors also suggest Samsung plans to announce a more expensive variant of the S20+ called the S20 Ultra, which takes all the features of that phone and one-ups them. Nowhere is this more apparent than with the S20 Ultra's main camera array, which makes most other flagship phone cameras look tame by comparison. Leading the spec sheet, according to Bloomberg, is a 108-megapixel main camera -- double the highest-resolution sensor on the other S20 phones.

The S20 Ultra will also get a 48-megapixel periscope telephoto lens. Samsung will reportedly pair this camera with software called Space Zoom. Together, they'll give the Ultra 10x optical zoom, 30x hybrid zoom and an insane-sounding 100x digital zoom. Rounding out the package is a 12-megapixel ultra-wide camera, a ToF sensor and a 40-megapixel front-facing camera -- presumably, so you can take selfies that capture every pore on your face in far too much detail.

The S20 Ultra may also one-up the S20+ in the display and internal specs departments. It's reported 6.9-inch display puts it close to Mate 20 X territory in terms of screen size. Like the S20's display, it will be a 120Hz 20:9 panel. Additionally, the top-spec model could come with as much as 16GB of RAM, up from the 12GB of RAM in the S20 and S20+. In terms of storage, the S20 Ultra will come 512GB -- with an additional 1TB of storage thanks to a microSD slot.

Of course, all of the S20 Ultra's bleeding-edge tech will come at a cost -- a reported $1,300. According to Samsung's own sites, all three phones will go on sale sometime early March.

You'll notice we haven't mentioned an update to the S10e. That's because it doesn't appear the company plans to release one. While Samsung could announce a more affordable S20 variant down the line (see: the S10 Lite model it unveiled recently), there haven't been any leaks of an S10e successor on the horizon. 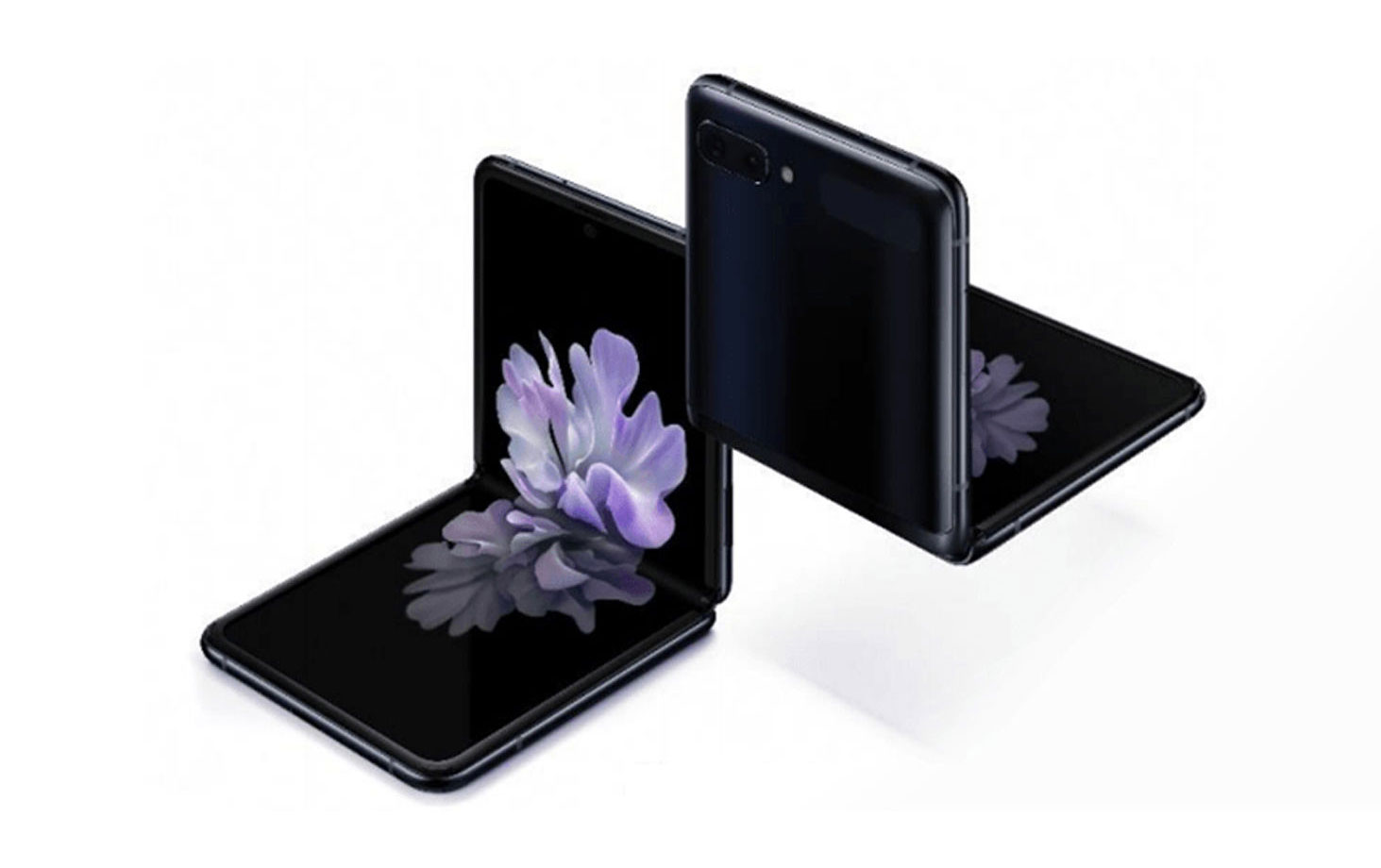 Despite the Galaxy Fold's tumultuous path to release, Samsung hasn't lost any of its excitement for foldables. On the 11th, the company is likely to announce an entirely new foldable display phone called the Galaxy Z Flip with a clamshell-like form factor.

We've known Samsung has been working on a clamshell foldable since last October. Hopefully, the Z Flip addresses at least some of the durability issues that made Galaxy Fold difficult to recommend. Multiple trademark filings Samsung made to lock up the term "Ultra Thin Glass" suggest the phone's display will be glass rather than plastic, which should make it less prone to creasing and scratching.

Like Motorola, it appears Samsung also used an older processor and cut corners on a couple of other areas to try to make the Galaxy Z Flip more affordable than the Galaxy Fold. According to WinFuture's Roland Quandt, the foldable will carry last year's Snapdragon 855+ processor and a modest 3,300mAh battery and only two main cameras. It also won't include a headphone jack, nor will you be able to add more storage through a microSD card slot.

Even with those tweaks, the Galaxy Z Flip is still likely to end up an expensive device. It could cost as much as $1,400 outright and an AT&T exclusive at launch. Interestingly, you may be able to buy the foldable ahead of the S20. Multiple reports have suggested that Samsung will start selling the Galaxy Z Flip on February 14th, three days after Unpacked. 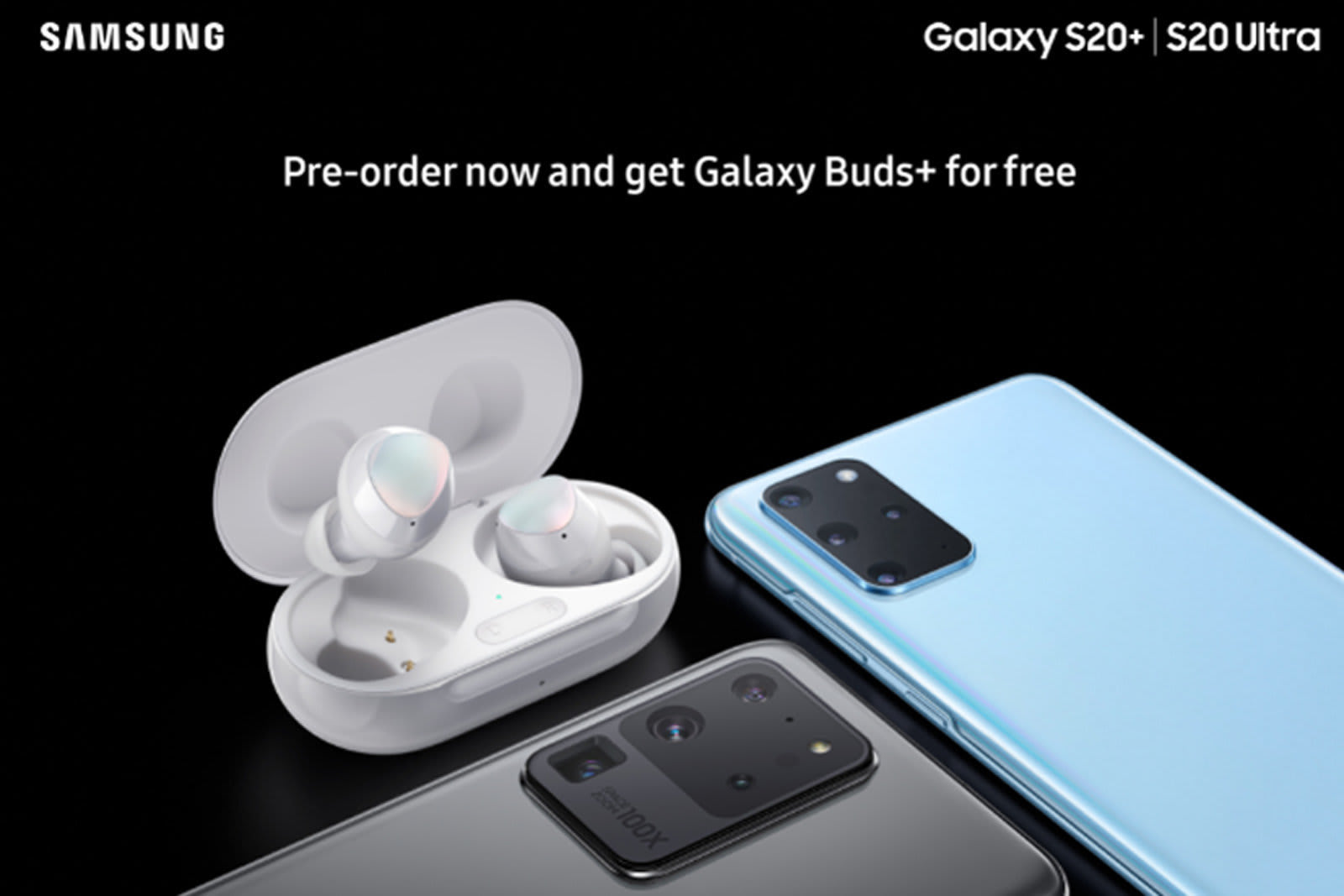 Alongside all the new phones, Samsung should announce a second-generation version of its Galaxy Buds, imaginatively called the Galaxy Buds+. Reports suggest Samsung's new true wireless earbuds will have double the battery life of the current Galaxy Buds (which can go about five and a half hours on a single charge), as well as improved call quality. They may also be better at isolating sound -- though they likely won't cancel out noise like the AirPods Pro. An official-looking image shared by leaker Evan Blass suggests Samsung will offer a free pair to people who pre-order the S20+ and S20 Ultra. 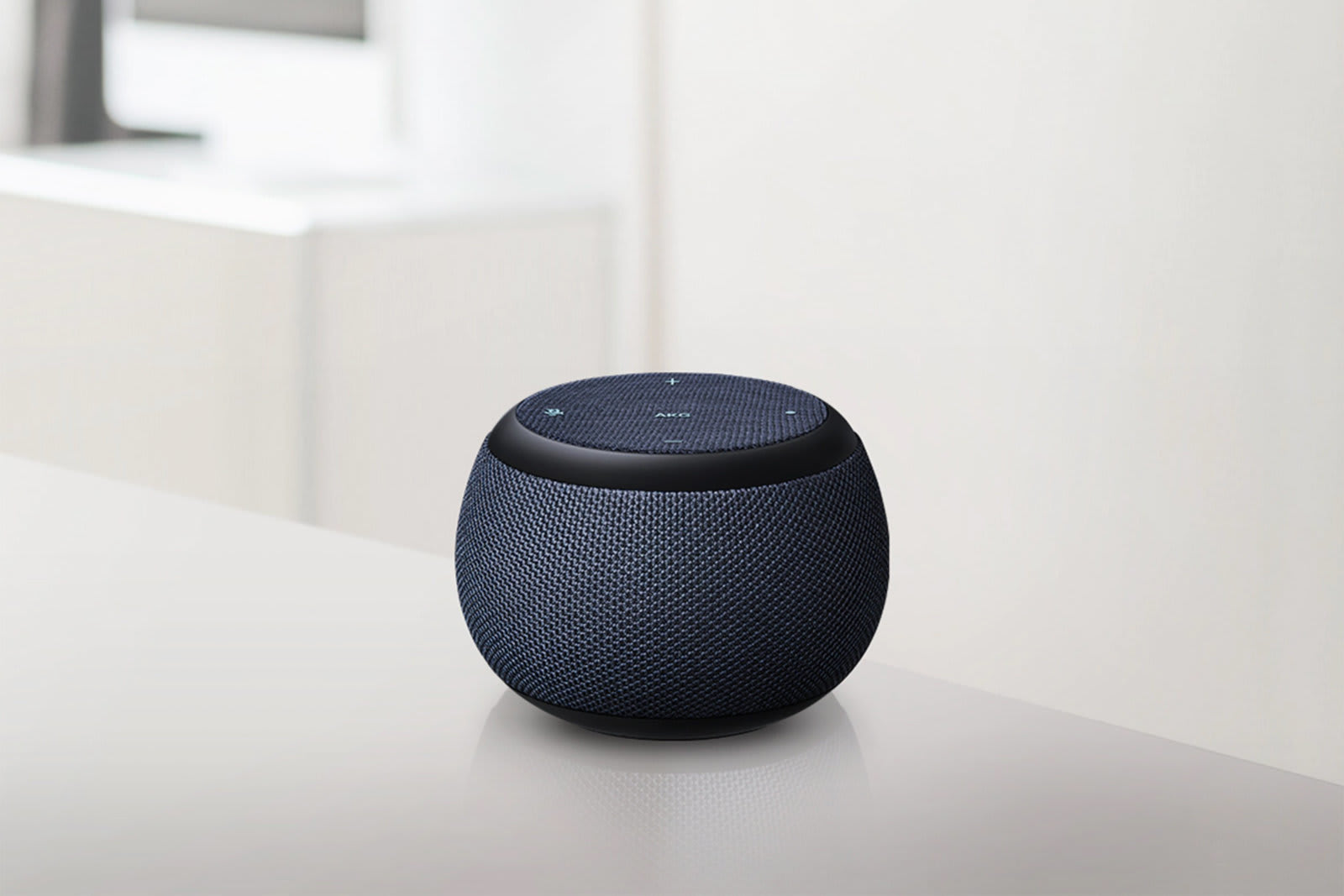 It's been approximately 18 months since Samsung first announced the Galaxy Home back in 2018. And while we probably won't see the smart speaker at Unpacked, Samsung will likely share a release date for the smaller Galaxy Home Mini it started beta testing last May.

In an interview with Bloomberg, Hyunsuk Kim, the CEO of Samsung's consumer electronics division, said the Galaxy Home Mini would be available to buy in "early 2020." While he didn't explicitly say Samsung will detail the device at Unpacked, it would make sense to see it there. Oh, and then Samsung accidentally shared the Galaxy Home Mini's release date on its website. Before it was pulled, the page said the speaker would come out in Korea on February 12th and cost 9,000 KRW (approximately $83).

As for the Galaxy Home, we probably won't hear about it because Samsung sees Bixby a little differently than it did in 2018. When Samsung first announced the device, the company positioned the digital assistant as a direct competitor to Google Assistant and Alexa. It seems clear the company has rethought its AI strategy and now sees the best way to differentiate Bixby is by making it into a tool for controlling smart home devices -- particularly those it makes itself. In that type of situation, a low-cost speaker would make a lot more sense.

There you have it: That's everything we expect Samsung to announce next week. Of course, the company could still find a variety of ways to surprise us, so you'll have to join us on February 11th to see everything Samsung announces.

In this article: android, audio, earbuds, foldable, foldable phone, galaxy buds+, Galaxy S11, Galaxy S20, Galaxy S20+, galaxy z flip, gear, home, leak, mobile, samsung, samsung unpacked, smartphone, true wireless earbuds, unpacked, wearables
All products recommended by Engadget are selected by our editorial team, independent of our parent company. Some of our stories include affiliate links. If you buy something through one of these links, we may earn an affiliate commission.